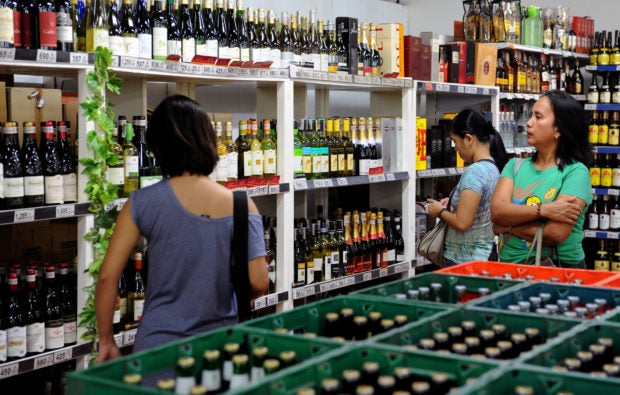 Customers look at alcoholic beverages on display at a supermarket in Manila on January 1, 2013. A “sin tax” on cigarettes and alcohol dampened the New Year party spirit when it was introduced in the Philippines on January 1, as part of a government bid to boost finances. (Photo by JAY DIRECTO / Agence France-Presse)

Improved revenue and volume growth in the first nine months indicated sustained demand for alcoholic drinks despite higher prices, with the trend likely to continue in the fourth quarter of the year, an analyst said.

“The bottom line of these firms were in line or even above, by some analysts’ estimates, in [the third quarter of 2022]. Most likely, the boost in revenues in the liquor industry is still going to be there now that the holiday season is nearing,” Luis Gerardo Limlingan, head of sales at stock brokerage house Regina Capital Development, said on Tuesday.

“The spending behavior of consumers will probably remain unchanged from the prior years despite elevated product costs since employees will still be receiving their bonuses, thus having more money to spend,” he added.

Revenge spending in the postpandemic era has already bolstered sales in the first nine months of the year.

Even with price increases, Ginebra San Miguel said volume rose 8 percent, pushing up revenues by 12 percent to P34.5 billion during the period.

“It has been a particularly challenging period, with the conflict in Ukraine continuing to have wide-ranging impacts on economies, companies, suppliers, workers and employees alike,” SMC president Ramon Ang said.

“Fortunately, [Ginebra] has been able to adapt to changing conditions, especially on the ground, as it continues to work to reach and serve its target markets,” he added.

In a presentation to investors, the company said all product categories recorded growth during the first three quarters of 2022. These included brandy, wines and specialty beverages.

Total sales during the nine-month period jumped 34.9 percent to P8.95 billion amid a 26 percent increase in volume to 3.3 million cases.

For some producers, however, rising cost pressures have impacted the bottom line.

Higher prices of raw materials, energy and shipping cut the company’s margins to 10.5 percent from 12.6 percent during the nine month period. This was despite a revenue increase of 15.9 percent to P21.9 billion.

“[T]hese liquor firms have been resilient amid the economic challenges in the past months with both of their long-term trend still intact, signifying the strong demand from investors across these liquor stocks,” Limlingan said.