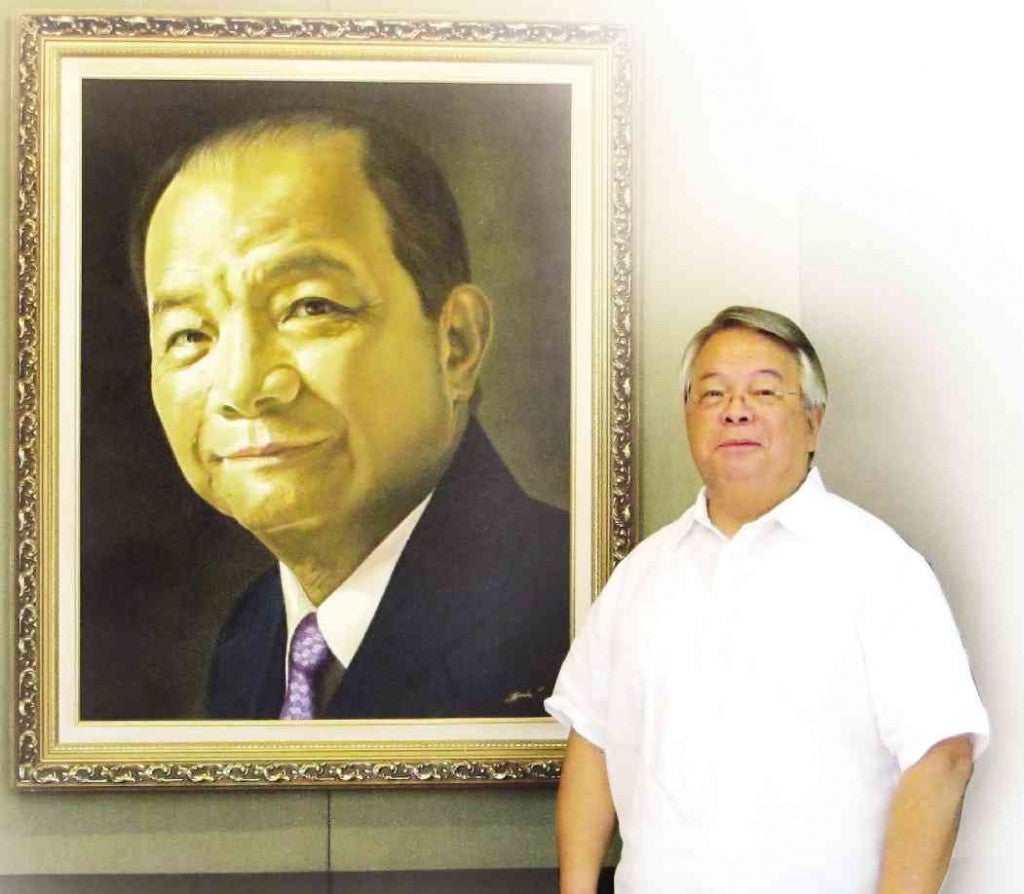 Phinma CEO Ramon V. Del Rosario Jr. poses beside a portrait of his father, Ramon Sr., considered one of the fathers of Philippine industry.

The Phinma group plans to scale up its footprint in Southeast Asia’s education space by transforming its pilot nursing and healthcare training center in Myanmar into a full college while scouting for expansion opportunities in Vietnam and Indonesia.

At the same time, the group will be expanding Phinma Education’s business in the Philippines organically and through more acquisitions.

This coming schoolyear 2018-2019, the group’s target is to increase enrollment across its portfolio of six local education institutions to 75,000 from 58,837 in the previous schoolyear as students under the K-12 program reach college level, Phinma Corp. chief executive officer Ramon del Rosario Jr. said in an interview after the company’s stockholders’ last week.

“Moving forward, Phinma Education continues to search for schools to add to its growing network in pursuit of our goal of becoming the largest education network in the coming years,” Del Rosario said in a presentation to stockholders.

The group’s local education portfolio includes Araullo University, Cagayan de Oro College, University of Pangasinan, University of Iloilo, Southwestern University and its latest and the first Metro Manila-based acquisition, St. Jude College, which will be integrated into the network this year.

Phinma Training Center in Yangon—which was established in partnership with Victoria Hospital, one of the most technologically advanced hospitals in Myanmar’s biggest city—started offering short nursing and healthcare programs for nursing assistants in 2017. Although enrollment was initially modest at around 160 students, the program provided Phinma with valuable insights into the Yangon market, bringing it closer to its goal of eventually offering full-degree programs.

Phinma, however, still has to wait for Myanmar to enact a law to open up education to foreign investment. “They have made initial moves but it hasn’t been enacted yet. We’re still constrained, but as soon as they open up we’re really interested,” Del Rosario said.

Once Phinma is able to upgrade the training center in Yangon into a full college, nursing will still be a focus given strong demand for nurses. “But we want it to be a general college, offering things like Business, Education, Engineering, similar to our model here. We think we’ll be successful doing it in other countries,” he said.

Phinma also has “strong interest” to expand in Vietnam and Indonesia but has yet to firm up plans, Del Rosario said.

Read Next
Is the Philippines most at risk in Asean from China-US trade war?
EDITORS' PICK
Speed up your game with the new vivo Y20s [G]
Pre-order the new vivo Y20s [G] to get a free TWS earphone
WHO says not to use ivermectin on COVID-19 patients
PH’s COVID-19 active cases reach over 190k after 12k new infections reported
Pru Life UK receives four golden arrows for solid corporate governance
Harry Roque in hospital for COVID-19 treatment
MOST READ
Stop ‘creeping occupation’ of ‘militia’ boats in WPS, Pacquiao asks China
Bea Alonzo clarifies status of her relationship with Dominic Roque
Convicted former aide of Sen. Bong Revilla dies — BuCor
Locsin to China: ‘Then move out’
Don't miss out on the latest news and information.