Is the Philippines most at risk in Asean from China-US trade war? | Inquirer Business
Close
menu
search

Is the Philippines most at risk in Asean from China-US trade war?

The Philippine stock market has been very volatile lately. One of the reasons for this performance is the uncertainty on how we will be affected by the China-US trade war.

Earlier this month, Bloomberg came out with a report saying that the “Philippines [is] most at risk in Asean from China-US trade war.”

The article said “about 16.9 percent of the Philippines’ shipments abroad are part of China’s value chain; goods that serve as inputs to China’s exports, according to RHB Bank Bhd. That compares with 11.4 percent for Malaysia and just 2.2 percent for Vietnam.” (Source: Bloomberg)

Despite the data cited in the report, I do not agree that the Philippines is most at risk from a China-US trade war given the following reasons:

According to data from the Philippine Statistics Authority, China accounted for only 11 percent of our total exports in 2016 and 2017. This is much less than the 16.9 percent cited by the report.

If indeed a large portion of our shipments abroad is used in China’s value chain, it is important to point out that these exports account for only a small portion of our GDP. Recall that the Philippines is largely a domestically driven economy, with exports accounting for only 18.8 percent of GDP vs 113.8 percent for Singapore, 86 percent for Vietnam and 63.9 percent for Malaysia. Assuming that the RHB Bank Bhd’s data is correct, that 16.9 percent of our exports are used in China’s value chain, this only accounts for 3.2 percent of our GDP, much lower compared to 7.3 percent for Malaysia and 5.7 percent for Singapore. (Source: Bloomberg, PSA, BSP, World Bank, COL Estimates)

What worries me about a trade war between China and the US is its potential impact on the global economy. The uncertainty from a possible trade war could discourage businesses from making new investments in China and the US. The higher cost of imported products resulting from higher tariffs could also negatively affect consumer spending in both countries. Given the size of these two economies, these developments could have a significant impact on global economic growth, which would indirectly impact the Philippine economy.

While I hope that a full-blown trade war between China and the US does not materialize, I don’t think that it should discourage you from investing in the Philippine stock market as it does not change the attractive long-term fundamentals of the domestic economy. 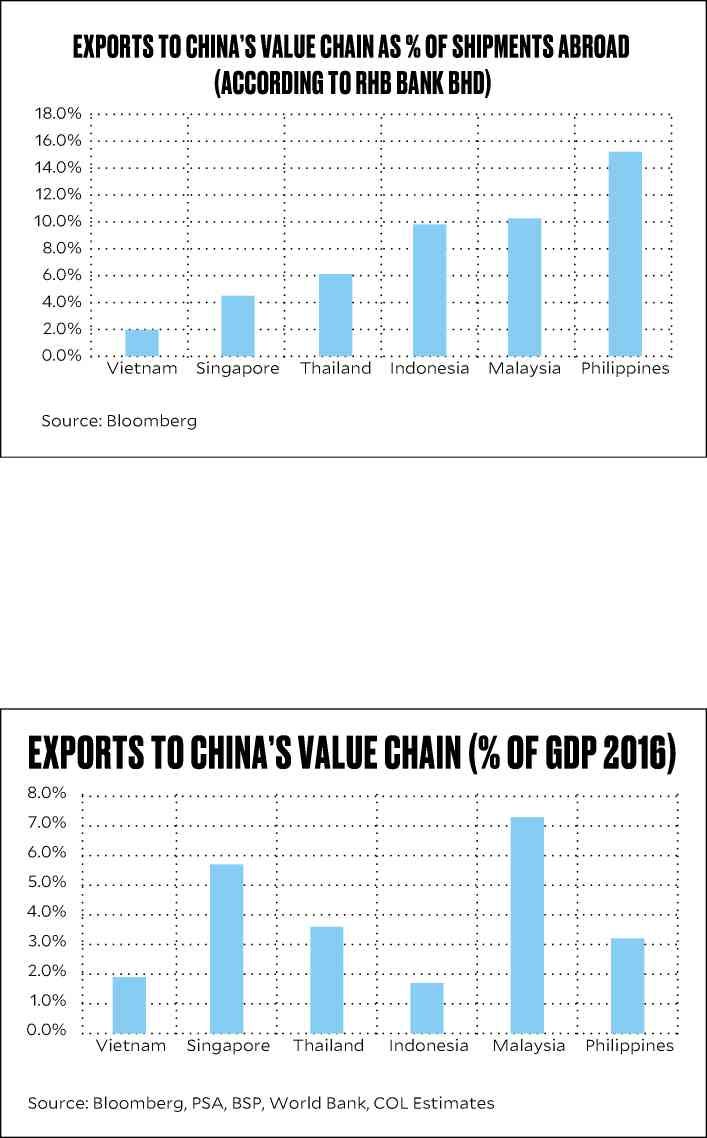