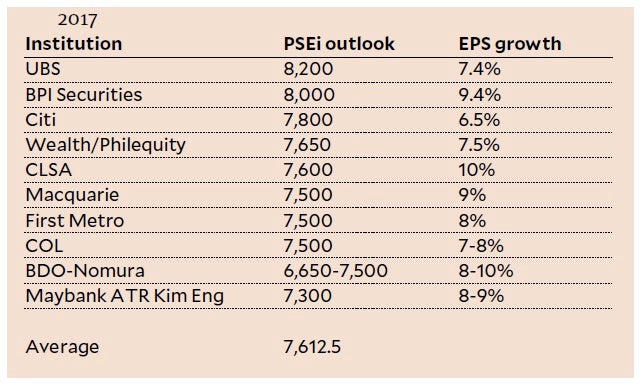 After two consecutive years of decline, the local stock barometer is widely forecast to climb this year notwithstanding what continues to be a challenging environment for the global community and sporadically distractive local political noise.

As President Duterte enters his first full year in office, his rhetoric and policy actions will face more intense scrutiny. After the honeymoon period, investors expect results and many are betting that the new CEO of the land can deliver.

Mr. Duterte’s pledge to usher in a “golden age of infrastructure” in the Philippines is seen to offer a good story for the stock market under this administration, a follow-up to the economic turnaround and investment-grade rating story that fed the bulls during the regime of President Aquino.

The aggressive increase in spending, however, has not happened yet in the early days of the new administration, but if it does, this is expected to propel the country to a higher trend gross domestic product (GDP) growth rate breaching 7 percent and create powerful new drivers like tourism and, to a certain extent, manufacturing.

CLSA head of research Alfred Dy said politics and economics would dictate market fortunes in 2017. “We advise investors to focus on President Duterte’s rhetoric and action plan in first quarter 2017 as well as progress on the infrastructure and tax reform front,” he said.

Based on five-year mean price to earnings (P/E) ratio of 17.1x—which means investors are willing to pay 17.1 times the kind of money they expect from PSEi stocks—CLSA expects the local stock barometer to hit 7,600 by year’s end.

But for this forecast to materialize, Dy said: “We need to see GDP (gross domestic product) growth of at least 6.8 percent and aggregate corporate EPS (earnings per share) growth of 10 percent in 2017.”

“We need to see some public-private partnership (PPP) contracts awarded in 2017 as well as strong growth in the infrastructure and tourism space,” he added.

Veteran fund manager Wilson Sy of Philequity said this year could be less volatile than 2016. “But we’re still in a consolidation phase,” he said. For instance, he said interest rate increases and potential policy moves from newly inaugurated US President Donald Trump would have an impact on the market. However, he said the PSEi could still move to higher levels this year.

For BPI Securities, which is among those expecting the index to breach 8,000 this year, the decline in valuations at end-2016 offered good bargains.

“The market will find a catalyst,” BPI Securities president Michaelangelo Oyson said. “I am of the view that the index could once again pierce 8,000 in 2017. It is understandable for investors to ask for catalysts for a reversal in the downtrend. For now, it is comforting to note that in the recent past the trend reversal was not driven by any apparent catalyst. Recall the experiences in 2014 and 2016. The Philippine market eventually recovered with no clear attributable catalyst in sight at the height of the investor risk aversion towards EM (emerging markets). Foreign investors came back when the dust settled and found solace in the strong economic numbers of the Philippines.”

“Cautiously optimistic” is how BDO Unibank Jonathan Ravelas described his institution’s house view for the year. “It will be a tale of two halves.”

Given a string of uncertainties this year, BDO prefers to take a conservative view, projecting a low of 6,650 to a high of 7,500 by yearend. While the economy has been resilient and prospects were bright for the domestic economy in the years ahead, he said that present uncertainties—including external factors—were considered in the house view.

Apart from Trump policy uncertainties, the US Fed’s interest rate increases, China’s economic performance and domestic political risks, the fragile European Union remains a key risk to global markets. After Great Britain voted to exit the EU in June last year, investors are keenly watching how this would be executed and whether other European states would follow suit.

“We are generally positive over earnings visibility for the first half of the year but are concerned that as political events in Europe evolve starting mid-second quarter, volatility may get very interesting going into second half,” said Jose Mari Lacson, head of research at ATR Asset Management.

“Earnings growth for most companies won’t be exciting because reflating commodity prices will be reversing the profit margin expansion over the past two to three years,” he said.

The previous year was a roller-coaster ride for the PSE. After a sluggish start mostly due to ripples from China’s economic woes, the stock market rebounded as the country remained an outperformer in terms of economic growth. Shortly before the elections, however, investors pocketed gains especially as a dark horse—Mr. Duterte—emerged as the frontrunner toward the end of the campaign.

After the relatively peaceful and credible conduct of the elections in the country and Mr. Duterte unveiled a 10-point economic program that vowed to continue and build on the economic reforms started by his predecessor, the PSEi hit a year-high of 8,102.3 on July 21, 2016.

By September, jitters over the US Fed’s interest rate increases dominated the market. Toward the end of the year, investors even became more jittery as President Duterte escalated his anti-US rhetoric—at one point even hurling expletives at then US President Barack Obama and the US ambassador. By October, the market started getting used to Mr. Duterte’s anti-West rhetoric and even cheered his renewed diplomacy with China, especially as he brought home $24 billion in fresh investment and concessional financing deals after a historic state visit.

By November, US elections became the main focus of the market. Wall Street was expecting Hillary Clinton to win but as Donald Trump became the victor, this spooked global markets and especially battered emerging economies like the Philippines given the American businessman’s protectionist and isolationist stance during his campaign.

In his fourth-quarter 2016 review, emerging markets investment guru Mark Mobius of Franklin Templeton Investments said: “Asian markets declined over the quarter, underperforming emerging markets as a whole. The Philippines was among the weakest performers on concerns that US protectionist measures could adversely affect trade and the country’s significant outsourcing sector.”

In 2015, the business process outsourcing (BPO) sector contributed $22 billion to the domestic economy. At least 70 percent of BPO investors are from the US.

Lofty stock market valuations also attracted profit-taking. Philippine stocks traded at a premium relative to regional peers for years and for many big foreign fund investors, it was time to lighten up their positions.

Total foreign buying at the stock market last year amounted to P990.59 billion but foreign selling surged to P987.78 billion especially in the last quarter of the year, leaving a meager P2.8 billion in net foreign buying for the year.

Fresh capital-raising activities in the PSE (primary shares offering only) ended last year at P170.12 billion, slightly lower than the P184.6 billion raised for the whole of 2015. This was also below the P200-billion goal of the local bourse.

Nonetheless, the size of the Philippine stock market expanded by P973 billion in 2016 as total market capitalization ended at P14.44 trillion on the last trading day of 2016 from P13.47 trillion in 2015. The stock offerings helped support this growth and offset the decline in prices in the market as the PSEi closed at 6,840.64 points, 1.6-percent lower than its closing in 2015.

“The market experienced a lot of volatilities in 2016 arising from unexpected developments in the global political landscape as well as the interest rate hikes in the US. Despite this, we churned a relatively healthy capital-raising number, considering most of these activities happened during the second half of the year. This is a testament to the strength of the local economy,” PSE president and chief executive Hans Sicat said.

This year, the PSE intends to diversify its product offering with the launch of the dollar-denominated securities (DDS) and the new window for the listing of public-private partnership (PPP) companies following the approval of the rules for both products late last year.

“We believe there will be a healthy pipeline of initial public offerings and other fund-raising activities in 2017. We will continue to work with our regulators so we can continue to introduce new products for our market in 2017 as we have successfully done so this year,” Sicat added.