Investors bullish on pivot to China 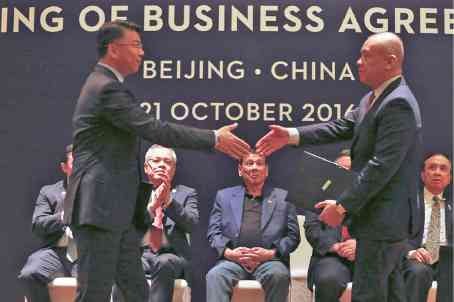 President Duterte watches a Filipino executive and his Chinese counterpart seal a deal with a
handshake in China in October.

For a country with a huge infrastructure backlog, lagging in foreign tourists despite its beautiful outdoors and really starving for foreign direct investments (FDIs), rekindling bilateral ties with China after a five-year diplomatic chill was a very attractive proposition. This was what President Duterte—who brought with him almost his entire Cabinet plus some 450 top businessmen—was set to accomplish during his state visit to China in October last year.

He didn’t come home empty-handed. This historic visit marked a “new stage of practical cooperation, bilateral commerce, trade and technology,” as China has proclaimed. He came home with some $24 billion worth of financing and investment deals—some of which may or may not materialize in a world where MOUs (memoranda of understanding) are a dime a dozen—and this made the Philippine stock market very happy. Stock market investors chose to ignore the anti-US rhetoric that escalated in China when Mr. Duterte announced a perplexing “military and economic separation from the US” and chose to focus on the positives, particularly on the tourism and infrastructure areas.

“I think this is positive for the economic development of the Philippines because in recent months, we have seen substantial improvement in China-Philippines relations and the emphasis attached by senior officials from both countries on bilateral, economic ties and economic collaboration will lead to an improved outlook of Chinese FDIs (foreign direct investments) in the Philippines, especially with the robust domestic-driven growth in the Philippine,” said Fan Cheuk Wan, head of investment strategy at HSBC Private Bank.

The tension in the West Philippine Sea has been immediately diffused, with Filipino fishermen finally able to fish along the disputed waters at marine resource-rich Scarborough Shoal without harassment from the Chinese navy. Shortly after Mr. Duterte’s inauguration as President, the Philippines, as a key legacy left by his predecessor Benigno Aquino, had already scored a major victory at the United Nation Tribunal, which concluded that there was no legal basis for China to claim historic rights to resources within the sea areas falling within the “nine-dash line.” Having found that none of the features claimed by China was capable of generating an exclusive economic zone, the tribunal found that it could—without delimiting a boundary—declare that certain sea areas are within the exclusive economic zone of the Philippines because those areas were not overlapped by any possible entitlement of China, the UN Tribunal said.

But Mr. Duterte knew that it would be a meaningless victory without any international body with capability to enforce the UN ruling. Lacking in military might to safeguard its own borders compared to its gigantic neighbor, the Philippines’ then newly elected leader did not find enough assurance even from its long-time ally, the United States, that it could ward off China from the exclusive economic zone. Furthermore, Mr. Duterte was ticked off by US officials’ criticisms of human rights violations related to his all-out war on drugs, which to date has claimed the lives of more than 6,000 suspected drug users, pushers and even some innocent bystanders. Thus, the new CEO of the land chose a pragmatic solution: If you can’t beat them, join them.

“What we have to try is to take advantage of the stuff we can get from China,” said veteran stockbroker Joseph Roxas, president of Eagle Equities, who was part of the business delegation to China during last year’s state visit.

“If they can send three million tourists for 2017 and if you consider the estimated average spending of Chinese tourists of $15,000, that’s $45 billion,” Roxas said, adding that this influx of Chinese tourists should benefit publicly listed gaming companies like Bloomberry Resorts Corp., Travellers International Hotel Group Inc. and Melco Crown Philippines.

Roxas was referring to the projection made by Tourism Secretary Wanda Teo that she was expecting up to three million Chinese tourists this year following President Duterte’s successful visit to China. During the state visit, Chinese President Xi Jinping agreed to lift negative travel advisories issued a few years ago to Chinese citizens traveling to the Philippines.

“President Duterte’s political realignment of the Philippines, distancing from the US and moving closer to China, is high risk but has economic benefits. Along with rising Chinese tourist arrivals, there is the prospect of Chinese funding of tourism projects,” investment house CLSA said in a research note on Asean tourism dated Jan. 16.

“The drawback of this strategy though, is that future political conflicts with China could disrupt tourism revenues. This reinforces the argument for tourism policy to have a multiple focus, rather than the exclusive objective of attracting more Chinese tourists,” the research note added.

Manuel Tordesillas, Maybank Kim Eng regional head for investment banking and advisory and concurrent head of the Philippine office, said in a recent forum organized by the Urban Land Institute that new alliances being forged by Mr. Duterte would “substantially” increase tourism. He cited Macau as an example of a territory where tourist arrivals from China dramatically increased when it first allowed mainland Chinese to come over.

Sharing such optimism on tourism, property developer DoubleDragon Properties Corp. has committed to spend $136 million, or about P6.6 billion, to double the room capacity of its hotels under the Chinese brand of JinJiang Inn. Through hospitality subsidiary Hotel of Asia Inc. (HOA), DoubleDragon unveiled at the sidelines of the state visit in China plans to fast-track its expansion and build a 2,000-room capacity by 2020 from the current capacity of 1,000. The company’s principal investors Edgar Sia II and Tony Tan Caktiong were part of the business delegation to China. 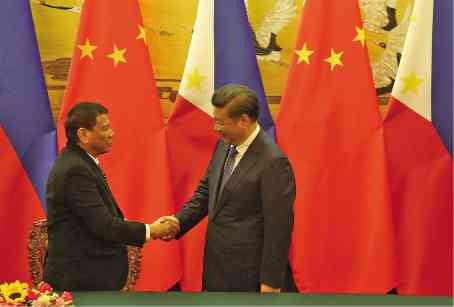 President Duterte with Chinese President Xi Jinping in a meeting at the Great Hall of the
People in Beijing.

The availability of infrastructure finance through the newly created Asian-focused multilateral lender Asian Infrastructure Investment Bank (AIIB) would also have a positive impact on the country, Tordesillas said.

If China agrees to fund the Philippines’ big-ticket infrastructure deals, that would be a good “ex-deal” in exchange for shelving its hold on the Hague arbitration ruling, said PwC Philippines chair and senior partner Alex Cabrera in a forum organized by Urban Land Institute.

The $24-billion package brought home by Mr. Duterte from China included $15 billion worth of projects and $9 billion in credit facilities. Out of these, eight are vetted by the government. There were also 17 private sector-initiated deals with a combined value of $11.24 billion signed during an event organized by the Philippine Chamber of Commerce and Industries (PCCI) and the Federation of Filipino Chinese Chambers of Commerce Inc. (FFCCCI).

Two publicly listed firms bagged investment deals at the sidelines of the state visit. Mining firm Global Ferronickel (FNI) signed a deal worth as much as $700 million with Baiyin International Investment Ltd. to construct a steel plant while businessman Tony Tiu-led Greenergy Development Corp. inked a memorandum of understanding with PowerChina Guizhou Engineering Corp. to develop the 300-megawatt Pulangi hydropower plant project at an estimated cost of $1 billion.

MVP Group signed an MOU to establish a partnership with China Railway Engineering Corp. (CREC) to undertake $2.5 billion worth of infrastructure investments. MVP Group also signed a deal with Suli Group Ltd. to invest in cabling manufacturing facilities in the Philippines that would produce $3 billion in trade value.

Businessman Reghis Romero scored three deals involving Chinese contractors during his trip. Romero’s Mega Harbour Port sealed a $780-million contract with China Harbour Engineering Co. Ltd. (CHEC) to undertake the 214-hectare Davao coastline project. This is a five-year partnership with the local government of Davao to transform the coastline of Davao City from Agdao and Poblacion Districts into a “well-planned and self-contained community.” Romero said the Davao coastline and port development project would cost P39 billion.

Based on the list, the third project signed by Romero was a $328-million deal with CCC Dredging Co. to undertake the Cebu international container and bulk terminal project. This will build a berthing facility of up to 1,200 meters as part of the 35 hectares allotted for port development. 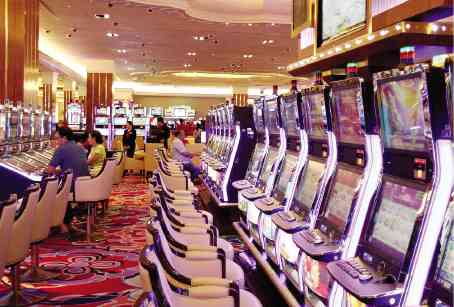 Gaming establishments are seen benefiting from the recent lifting of
China’s negative travel advisory on the Philippines.

Aside from tourism, one area that could benefit immediately from the renewed friendship with China was the agriculture sector, particularly fruit exports, Eagle Equities’ Roxas said.

China announced during the state visit that it had resumed giving permission to 27 Philippine companies exporting fruits to the mainland, including mangoes.

At least one agribusiness firm that plans to list on the stock exchange—the country’s leading hybrid rice producer SL Agritech Corp.—signed a joint seed-production deal in China. This paves the way for the production of enough local hybrid rice variety to be cultivated in local rice fields in the next five years. Joint investment is eyed at $160 million.

SL Agritech chair Henry Lim Bon Liong, who was also part of the business delegation to China, signed the company’s partnership deal with Jiangsu Hongqi Seed, a major player in the seed industry of Jiangsu province.

Although Mr. Duterte announced this pivot to China long before he knew who would win as the next US president, his gambit proved providential.

With increasing risk of US protectionism and isolationism under Mr. Trump, China might play a more prominent role in advocating free trade and in driving the next stage of globalization, said HSBC Private Bank’s Fan.

“I believe this is a clear policy shift advocated by the Philippine President and this seems to reflect that the Philippine government actually sees more value in improving the economic ties and collaboration in China while the US is now shifting to more inward-looking policies and also adopting a more trade protectionist policy. So, in the interest of the Philippine economy I do see the reason why the President is now pushing toward this policy shift to China more than the US because this goal is in line with the latest dynamics in the US,” Fan said.

“Tourism from China and Russia will be a plus but my personal view is that we should treat these relationships with caution. After all, they are communist countries and they think quite differently,” Cabrera said.

In the long run, Maybank’s Tordesillas sees this pursuit of “independent [from the US]” foreign policy helping existing bilateral relationships, ensuring that other economic powers like the US and Japan would not take the Philippines for granted. Recently, Japan Prime Minister Abe visited the Philippines in what was widely seen as a move to match China’s dowry.

“I guess there’s no harm in expanding our relationships, but it’s also quite important that we retain our relationship with the US because 77 percent of the BPOs (business process outsourcing) in the Philippines are actually US companies based there. That’s something we can’t afford to neglect.”