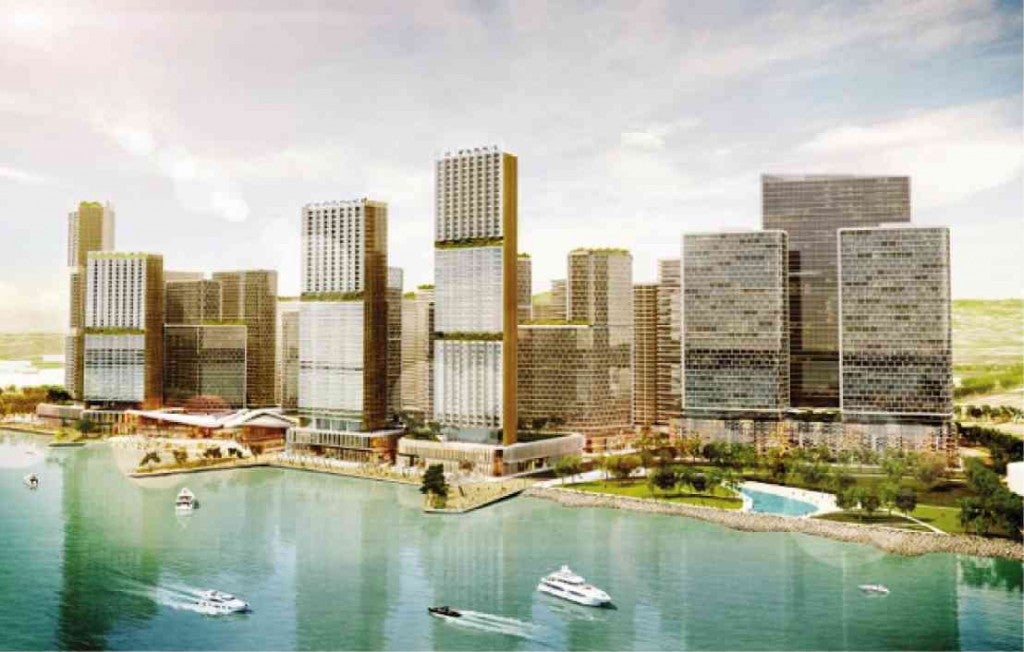 THE MASTERPLAN for the Mandani Bay project was done by Michael Banak of Australia-based Crone Properties.

CEBU CITY—An idle 20-hectare waterfront property at the reclamation area in Mandaue City will soon be transformed into a mixed use community aimed at becoming a lifestyle destination.

Mandani Bay will be a mostly residential project but with commercial and office components.

Project director Theodore Gilbert Ang said that on the property will rise 25 towers with podiums, a marina and a 450-meter long by 50-meter wide Green Strip, a park and playground area what will also serve as an activity area for special events like sports and concerts.

The towers will be built on top of the podiums but these will be set back so as to have a clear view of the skyline.

The presence of offices, around 10 percent of total buildings space, will support the commercial locators and make their businesses viable, Ang said.

“[The name] is fitting for our project because it links Mandaue’s heritage with its bright future,” he said.

The Mandani Bay project will be implemented by HT Land, a joint venture between Hong Kong Land and Taft Properties.

“Hongkong Land and Taft Properties intend to transform this part of Mandaue into a modern, yet culturally sensitive lifestyle destination,” Wong said.

The Mandani Bay is the first real estate development in Cebu of Hongkong Land, a $30-billion business that was established in 1889.

“Hongkong Land has strong confidence in the future of Cebu and the Philippines and we believe this project will contribute positively to the city,” Wong said.

The company, a member of the Jardine Matheson Group, holds 40 percent of Northpine Land Inc., which has ongoing horizontal developments.

These include Greenwoods Village and Kohana Grove in Cavite, Forest Ridge in Antipolo City and Southampton in Laguna. Its partners include Metropolitan Bank and Trust Co. and San Miguel Properties.

It also owns 40 percent of the Roxas Triangle Towers in Makati, in partnership with Ayala Land and the Bank of the Philippine Islands.

Jack Gaisano, chairman of Taft Properties, pointed at the unique design features, its strategic location and extensive water frontage as the key attractions of the project.

“The project will also be built around several distinctive characteristics aimed at creating an attractive community in line with international standards,” Gaisano said in a statement.

The project, which will be implemented in eight phases, will have a total of 25 towers.

The first phase will include the construction of two tower buildings, a show gallery, a commercial strip, some office spaces and a park and playground, he said.

The two towers would cost around P4.5-billion and would have 27 and 25 floors, with a total of 1,200 residential condominium units. The construction of the show gallery, located at the property, is ongoing and will be completed by January 2016.

The first phase is expected to be completed in three and a half years while the target date of completion for the entire project is between 10 to 15 years, Ang said. The 450-meter-long Green Strip will be implemented per phase.

The commercial strip will be completed towards the end of the third quarter or early fourth quarter.

Ang said the plan was to begin the second phase of development after two years.