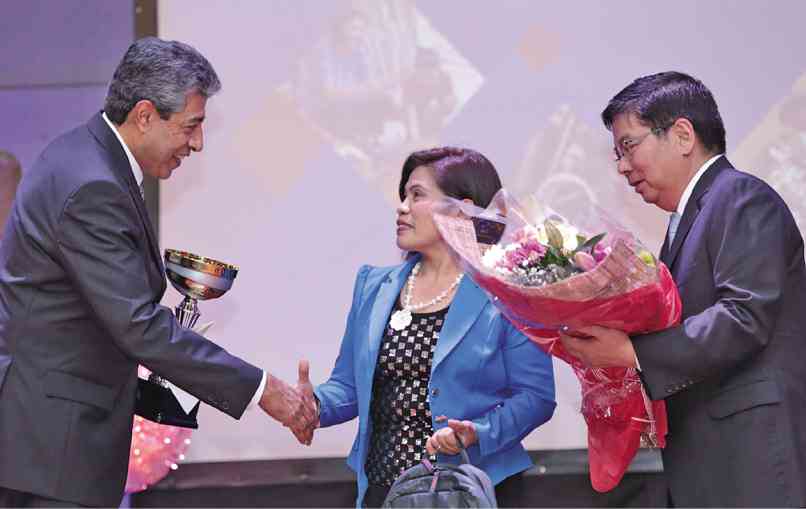 With nine children to raise, former public school teacher Lydia Malot and her husband Alberto, with only P300 as capital, ventured into the business of making nata de coco (NDC) in 1993 in her own kitchen using a recipe she found in the library.

Today, 12 years later, the 55-year-old Malot is the 2015 recipient of the Citi Microentrepreneur Award (CMA).

The Davao City native, who was the unanimous choice of the panel of judges, is the first national CMA awardee from Mindanao.

Malot grew her business with the help of Kabalikat para sa Maunlad na Buhay (KMBI), starting with a P4,000 loan in 2007.

Although she lost her husband two years ago, Malot pushed forward with her enterprise, falling back on the self-discipline and attention to detail she developed as a teacher to help her succeed.

She now supplies nata de coco and other coconut by-products to large canned food and juice producers in the Philippines.

The opportunity to export her product came when a Korean brought her NDC to a trade exposition in his own country.

From among similar products from other Asian countries, Malot’s NDC was chosen to be an ingredient of the famous Korean drink Mogu-mogu.

Her nine children have all graduated from college, their studies financed by her microenterprise.

At the recent CMA awarding ceremonies at the Bangko Sentral ng Pilipinas Malot said the award was “a Christmas gift from God” and an “answer to her prayers.”

KMBI, which has been Malot’s microfinance partner since the initial loan, and the officer who serviced her account were also honored during the CMA ceremonies.

Their respective microfinance partners and the officers who worked with them were also cited.

The winners received close to P2 million in cash and non-cash prizes, including life and health insurance coverage, four-week entrepreneurship training, and laptops and information technology training. They were also inducted into the CMA Alumni Network, the winners’ circle organized to provide support and networking opportunities. The network offers access to one-on-one mentoring, among others.

For and with family

BSP Governor Amando Tetangco, Jr., co-chair of the CMA national selection committee (NSC), said the awarding ceremonies were “a celebration of the gains from financial inclusion and (of) the Filipino family.” He said the awardees were “outstanding because they succeed even in the face of many challenges, because they inspire, because they contribute to their community.”

He said the winners were all driven to succeed in their endeavors because of their families and the members of the families also did their part to help run the businesses.

In view of this, he said the CMA was a celebration not just of outstanding microentrepreneurs but also of their families. Tetangco also commended the awardees for promoting financial inclusion by improving lives and serving as catalysts for development in their communities.

He thanked microentreprenuers, microfinance institutions, government agencies and private sector advocates for the growing success of the Philippine microfinance sector. “In the process, millions of entrepreneurs have achieved financial stability and the quality of life of millions has also improved because of microfinance,” he said.

Citi Philippines chief executive officer Aftab Ahmed, NSC co-chair, expressed his appreciation for the industry’s continuing support for CMA. “With each passing year, it becomes more and more evident that there continues to be a great wealth of entrepreneurs in this country. These are men and women who have displayed exceptional commitment, determination and ingenuity to create businesses that have contributed to better lives for themselves and their families, as well as to the communities where they live.”

A partner in the annual CMA is the Microfinance Council of the Philippines, Inc. chaired by Maria Anna dR. Ignacio.