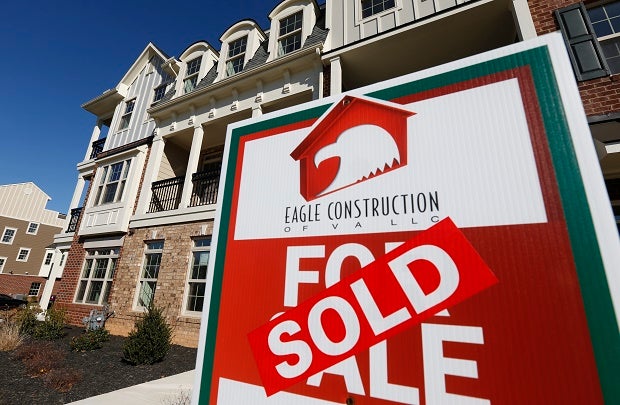 In this Jan. 8, 2015, file photo, a sign with a sold sticker is posted in front of a row of new town homes in Richmond, Va. The Commerce Department reports on sales of new homes in October, on Wednesday, Nov. 25, 2015. AP FILE PHOTO

A flurry of data released Wednesday signaled that the fundamentals of the US economy remain solid, if unspectacular, three weeks before the Federal Reserve will likely begin raising interest rates.

Consumers appear relatively confident in the economy and may be poised to spend a decent chunk of their rising incomes during the holiday shopping season. In addition, businesses are stepping up their investment in machinery and equipment, removing a persistent drag on the economy.

The steady consumer and business demand in the United States is powering the economy through economic pressures from overseas, which jolted financial markets during August and September and raised doubts about global growth.

With the US job market on solid footing and wages beginning to rise, the Fed is widely expected to raise short-term rates in mid-December for the first time in nine years.

Wages and salaries jumped 0.6 percent in October, the Commerce Department said Wednesday, and data for the spring and summer was revised substantially higher. US paychecks were 4.9 percent higher in October than they were a year earlier, a sizable gain. By contrast, in the first four years after the Great Recession ended in 2009, paychecks typically rose only about 2 percent to 3 percent.

O’Sullivan forecasts that the economy’s annual growth rate could reach 2.7 percent in the final three months of the year, from 2.1 percent in the third quarter.

Consumer spending rose only 0.1 percent in October, though that weak showing occurred partly because the month was unusually warm and Americans paid less for heat. In the second and third quarters, consumer spending topped 3 percent, a historically robust level.

With incomes revised higher, the savings rate jumped last month to 5.6 percent, the highest since 2012.

“History tells us that a chunk of that savings will eventually get spent,” said Stephen Stanley, chief economist at Amherst Pierpont.

Measures of consumer confidence have been mixed but generally paint an optimistic picture. According to Gallup, Americans plan to spend on average $830 on holiday shopping this winter — the most since 2007, just before the recession officially began.

And consumer sentiment ticked up this month, according to a survey by the University of Michigan. Lower and middle-income Americans were more optimistic about their personal finances in the coming year than higher-income households were, the survey found.

Still, a separate measure of consumer confidence from the Conference Board, a business research group, fell in November to its lowest point in more than a year. It found that fewer Americans expected their incomes to rise.

Even so, Americans are unleashing pent-up demand for big-ticket items such as homes and cars. Sales of new homes jumped last month and have increased 15.7 percent through the first 10 months of 2015.

Home sales have been bolstered by strong hiring and low mortgage rates. Sales of existing homes are on track to reach their highest level since 2007, even though rising prices are sidelining many potential buyers.

Separately, US factories in October received more orders for long-lasting goods, including steel, machinery and computers. The increase added to other evidence that manufacturing is recovering after a generally brutal year. A higher-valued dollar has made US goods more expensive overseas.

And factory output has also been held back by low oil prices, which forced oil and gas drillers to slash orders for steel pipe and other equipment.

Now, though, those drags appear to be fading.

Consistent hiring has underpinned most of the improvement in the economy this year. Employers added 271,000 jobs in October, the most since last December, and the unemployment rate reached 5 percent, the lowest level since the spring of 2008.

Solid job gains are likely to continue, at least judging from how few people are losing jobs. The number of people seeking unemployment benefits, which generally mirrors the pace of layoffs, fell to nearly 40-year lows last week.

Year-over-year inflation, which had remained stubbornly below the Fed’s target rate, has now reached 1.7 percent according to a measure compiled by the Federal Reserve Bank of Dallas. That’s not far from the Fed’s 2 percent target.

And Americans expect slightly higher inflation in coming months, according to the University of Michigan’s survey. That could bolster the case for the Fed to raise rates at its next meeting.

Oil prices hit reverse as dollar jumps on US data