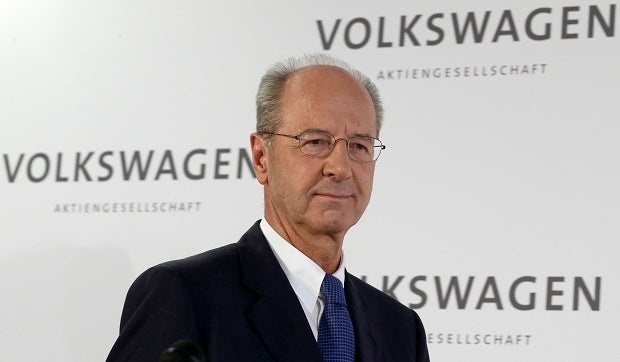 Hans Dieter Poetsch, new chairman of the board of directors of the Volkswagen stock company, arrives for a press statement at the company headquarter in Wolfsburg, Germany, Wednesday, Oct. 7, 2015. He fills a position vacated when longtime chairman Ferdinand Piech resigned in April. AP

DETROIT — Auto industry insiders strongly suspect the emissions cheating scandal at Volkswagen is much wider and reaches higher up the corporate ladder than the company is letting on.

Volkswagen’s new CEO, Matthias Mueller, was quoted Wednesday as telling a German newspaper that the investigation so far has found that a few software developers tampered with the pollution controls on some of VW’s diesel engines. He said top executives would not have gotten involved in the software.

But industry experts and analysts say it’s hard to believe a few designers acted on their own to blatantly circumvent US emissions tests.

“You know that simple software guys would never have the courage or the authority to initiate the cheating,” said retired General Motors vice chairman Bob Lutz. “They would want someone senior to sign off on it.”

VW has admitted that 11 million of its diesel cars worldwide have software that turns pollution controls on when the vehicles are being tested on a treadmill-like device and shuts them off when the automobiles are on the road. The trick enables the cars to get better fuel mileage while spewing illegal levels of smog-causing exhaust.

Mueller didn’t rule out a wider circle of offenders and said VW is “now clarifying the responsibilities in detail.” The automaker has suspended four people responsible for engine development and hired a law firm to investigate.

On Thursday, VW’s top US executive, Michael Horn, is likely to face tough questioning on Capitol Hill about what he knew and when he knew it. VW said he will testify before Congress that he found out about the cheating software only a few weeks ago.

Experts say others in the company had to know about the cheating because the software controlled devices engineered by other departments. Those departments would surely have seen something amiss during testing of their own equipment.

Also, the cheating lasted for seven or eight years, and during that time, engineers and department heads would have changed jobs, widening the circle of knowledge, said Karl Brauer, senior analyst at Kelley Blue Book.

“I cannot envision how an eight-year policy to design the computers to act this way would be known by a few people at a low level and nobody else,” he said.

The cheating came as VW was aspiring to become the world’s top-selling automaker. Former employees said engineers were under pressure from management at the time to fix a problem that prevented VW from selling certain diesels in the US

“They don’t take no for an answer,” said one former employee who spoke on condition of anonymity for fear of retribution from the VW.

Also, when some of the emissions violations were brought to VW’s attention by regulators in the US in 2014, the automaker disputed the findings and questioned the test results, fighting the Environmental Protection Agency for more than a year.

“Someone had to approve it initially and keep approving it for seven or eight years, and then start lying about it more when it was discovered,” Brauer said.

A VW spokesman in the US wouldn’t comment Wednesday on the analysts’ statements.

Mueller also said in the interview in the daily Frankfurter Allgemeine Zeitung that a recall of 2.8 million cars with the software could start in Germany in January. That wouldn’t include cars in the US, where any fix still must be approved by the EPA and California regulators.

He said many of the cars being recalled won’t need much fixing, merely an adjustment to the software. Others, though, may require mechanical fixes such as new injectors or catalyzers.

READ: Volkswagen CEO: recall of cars hit by scandal to begin in January

He also said not all 11 million cars will need to be recalled.

Mueller, who became CEO less than two weeks ago when Martin Winterkorn resigned over the scandal, said the cars have different transmissions and country-specific designs. “So we don’t need three solutions, but thousands,” he said.