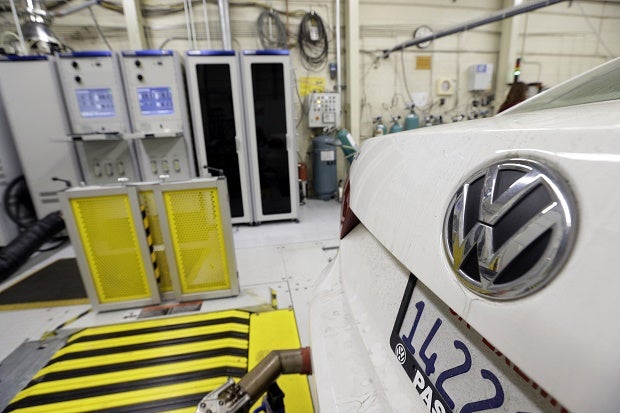 In this Sept. 30, 2015 photo, a 2013 Volkswagen Passat with a diesel engine is evaluated at the California Air Resources Board emissions test lab in El Monte, Calif. Three years after Volkswagen opened a pollution testing center in Oxnard, Calif., VW admitted that it manipulated emissions results in 482,000 US diesel vehicles to make them appear to run cleaner, raising questions around Volkswagen’s only test center in North America. AP

OXNARD, California — When Volkswagen opened its gleaming pollution testing center near the California coast, a top executive from the German automaker helped snip the blue ribbon and joined a tour of a lab so advanced that VW would brag the air inside was cleaner than in the surrounding strawberry fields.

Three years later, with VW admitting that it manipulated emissions results in 482,000 US diesel vehicles to make them seem more environmentally friendly, questions are swirling around Volkswagen’s only test center in North America. Was anyone at the facility complicit in the scheme? Or were VW’s own testers unaware of the deception like so many others?

The center in Oxnard, about 60 miles northwest of Los Angeles, was built with the help of a $10 million, tax-exempt public bond and opened in 2012.

Volkswagen saw the facility as key to its multibillion-dollar US growth strategy, partly because vehicles would have the selling point of meeting the nation’s strictest emissions standards. At the facility, VW runs cars through a battery of tests to check whether they’re polluting as little as advertised.

While no evidence has surfaced that Oxnard played a role in the fraud, the test center is sure to attract interest from government investigators and private attorneys lining up to sue VW.

“That would be one of the top facilities on my list to get inside of, whether through a subpoena or a search warrant,” said William Carter, a former federal prosecutor in Los Angeles who specialized in environmental crimes. “You’d want to explore what’s there.”

Carter said that investigators would want to know whether anyone in Oxnard knew about the “defeat devices” that Volkswagen has acknowledged installing on models from 2009 through 2015. The “device” was code in engine software that cheated diesel car emissions tests in the US; 11 million engines worldwide contained the software, including 8 million in the European Union. The scandal forced out VW’s CEO and could lead to $18 billion in US fines, an avalanche of lawsuits and criminal prosecutions both here and abroad.

California has launched its own criminal probe, but the state Attorney General’s office would not say if Oxnard was a focus. A US Justice Department spokesman said prosecutors are working closely with US Environmental Protection Agency investigators but declined to say more.

Two Southern California law firms have cited the center in lawsuits against VW.

“I’m dying to know if they were doing anything in that facility” related to the defeat device, said attorney Graham LippSmith, who is seeking damages for fraud and negligence in federal court in Los Angeles on behalf of VW diesel owners in California.

Volkswagen declined to answer questions about what it calls Test Center California, instead providing a fact sheet first distributed at the 2012 opening attended by local dignitaries and VW officials. It denied a tour request, and security escorted out an Associated Press reporter who visited.

California officials who began investigating discrepancies in VW’s diesel emissions months ago are familiar with the test center. The California Air Resources Board, in charge of enforcing the state’s tough emissions standards, has likely received test results from the center but spokesman John Swanton could not be sure and would not say whether they included the 2009 to 2015 diesel models in question.

READ: Volkswagen CEO: ‘I am endlessly sorry’ brand is tarnished

In recent weeks, agency staff visited Oxnard for ideas about how to upgrade their own aging emissions test center in El Monte, about 80 miles away, according to Swanton. The visit came while state and federal regulators were pressing VW to explain emissions test discrepancies but was not part of the investigation, he said.

The agency has researched other automaker test labs in California for ideas and was interested in the VW facility’s top-notch environmental design, which includes rooftop solar paneling that provides one-third of its electricity.

And the agency is currently collaborating with VW to test emissions from a diesel research vehicle outside the lab. Air Resources Board engineers have been driving a red VW Golf up and down the coast to Oxnard, taking pollution readings using equipment strapped onto the back. The idea is to test ideas that VW is considering for a possible future diesel model, Swanton said.

Paperwork submitted to the City Council in 2010 as part of the approval process for a $10 million California Economic Development Authority tax-exempt bond to build the $27 million center said it would include “sophisticated emission-testing equipment” as part of VW’s research to develop ultra-low emission vehicles, including diesel. VW came to Oxnard to replace a smaller, older facility nearby.

Civic leaders in Oxnard received a tour in 2012 that focused on how the precision lab assesses engine performance and its impact on emissions, said Steven Kinney, former president of the Economic Development Corporation of Oxnard.

The floors were so clean you could eat off them, Kinney said. He peered into a climate-controlled chamber where engineers could simulate sub-zero temperatures or desert conditions and saw cars undergoing emissions testing on treadmills.

At the Oxnard facility, and those like it that other automakers have in Southern California, cars would typically be several years old — tested for how they are performing as they age. Testing to certify that a new model meets US and California emissions standards is typically done at an automaker’s headquarters.

“They were proud of the fact that the air inside the facility was cleaner than the ambient air,” he recalled.