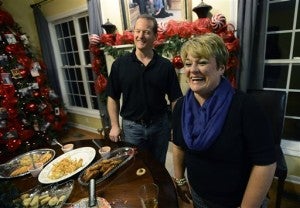 In this Dec. 17, 2013 photo, Dr. Jason Cabler and his wife, Angie, get ready for a holiday party at their home in Hendersonville, Tenn. Dr. Cabler, 46, suffered a heart attack on Christmas Day in 2012 while lifting weights in the exercise room in their home. Studies indicate heart troubles, including fatal heart attacks, spike this time of year, especially on Christmas and New Year’s. AP

SAN MARCOS, California — Deanna Kremis remembers the exhilarating day her young sons first had the energy to race each other up a flight of stairs.

The brothers, then ages 7 and 10, could barely walk before having heart transplants just a month apart. As they flew up the steps two at a time, jostling and shouting, she recalled, “my friend turned to me and said, ‘Are YOU ready to get one now?'”

It was a joke that became prophesy. Her health, too, was slipping away because of the same inherited cardiac condition. By the time she received her own transplant in July, her heart was so weak she fainted while walking down the hall, collapsed mid-sentence and passed out in the middle of dinner at a friend’s house.

Her decline was terrifying for her sons, who were just beginning to embrace their lives with donor hearts and now saw their worst memories reflected in their mother’s struggle. All three have hypertrophic cardiomyopathy, a genetic condition that causes the heart muscle to thicken until it can’t pump properly. Kremis’ mother and brother also have it, as did her grandmother.

“We just didn’t like seeing her go through the pain and stuff,” said Trevin, now 13. “We knew what it felt like.”

The 44-year-old stay-at-home mom for this family of five now finds herself in the unusual position of getting advice on post-transplant life from her sons while coordinating a never-ending regimen of pills and doctor’s appointments that has become her fulltime job. She also homeschools Trevin, who struggles with severe osteoporosis from the anti-rejection medicine he takes daily.

In the daily whirlwind, she still worries about her sons, who are thriving but face the constant threat of organ rejection and infection. Matthew has been hospitalized once for rejection and Trevin had eight fractures in one year from his osteoporosis. A third son — her eldest — and her husband are healthy.

“It’s just really hard seeing your babies go through anything. They’re amazing,” she said, holding back tears. “My goal was to get in and out of the hospital faster than them and I didn’t quite make it. And for them not to worry. I didn’t want them to worry about me. They’re my No. 1 priority.”

It’s not unheard of to have more than one transplant in one family when a genetic condition is involved, but the triple-transplant Kremises are a rarity even in the world of advanced cardiac specialty medicine.

Hypertrophic cardiomyopathy affects up to 600,000 people in the U.S. alone and is a leading cause of sudden death among young athletes, said Dr. Gregory Perens, one of the boys’ pediatric cardiologists at Mattel Children’s Hospital UCLA.

Many don’t have symptoms until there is a strain on the heart, while others experience shortness of breath and chest pain but have a milder version that can be controlled through medication and a pacemaker. A parent who carries the gene has a 50 percent chance of passing it along.

“For most families even having one child or one parent going through a transplant is a very big deal,” Perens said. “So to have three is an extraordinary amount of work.”

Still, the family never stops thinking about the anonymous donors who gave them all a second chance. After his transplant, the family would find Trevin crying quietly, worried about the family who had lost a child so he could live.

“I’ll take anything to feel the way I feel now,” said Kremis. “We’ve been blessed, just blessed, as a family and you live every day as best you can.”

The trio’s shared cardiac history is in plain sight around their house in suburban San Diego County, from the color-coded plastic bins that hold their prescriptions to the identical chest scars. Medical bills with eye-popping sums pour in for Kremis’ recent transplant and the family is still paying off the boys’ treatment six years later.

The family moved from Arizona to live with Kremis’ parents in San Marcos so they could to be close to the pediatric cardiology team at UCLA. Kremis’ husband, Richard, landed a job with AT&T. They have decent insurance, but with a high deductible, so that the boys can stay with the same specialists who oversaw the transplants.

“Has it affected our family? Yeah, but it’s just life,” said Kremis. “It doesn’t make our problems worse than anyone else’s. It just means when it comes, you just deal with it and you move on.”

Deanna Kremis’ grandmother, a no-nonsense outdoorswoman from Alaska, wasn’t diagnosed with the condition until she was in her early 70s. When Kremis was pregnant, her grandmother told Kremis to get her children’s hearts checked before they played sports — but said nothing more.

Her first son was healthy but when Matthew was born, doctors said he wouldn’t live past age 10. The family had to learn CPR just to take him home. His lips and nail beds were blue and his skin was so pale the veins in his chest and stomach popped through “like a see-through kid,” his mother said.

“They just told us to take him home and cherish him,” she said. “He’s been on medicine since the day he was born and he’s still on meds. It’s been his whole life.”

Doctors checked Trevin for the condition in utero, at birth and then every three years. The tests were negative until he turned six.

Within a year, Trevin needed a transplant — just as Matthew’s health spiraled out of control.

“We didn’t really know the extent to what it was in our family until after. We didn’t know how it affected siblings and how many siblings would be affected. You know, we just didn’t know any of that,” Kremis said, brushing away tears.

Donor hearts don’t last forever, but doctors haven’t given the trio a life expectancy. The Kremises prefer to focus on the future.

Matthew, now a high school senior, will study auto mechanics at a trade school next year. Trevin skateboards and has a passion for rebuilding electronics and repairing motorbikes. And the boys love dirt-biking with their father and older brother — a hobby their doctors don’t like, but haven’t forbidden.

“How many people can say that they’ve been through what I’ve been through and go ride dirt bikes for fun? There’s not a lot of people like me and my family,” said Matthew Kremis.

“It’s really part of what makes my family so awesome. All we really have is each other.”

The chance of getting a heart attack when waking up