The chance of getting a heart attack when waking up 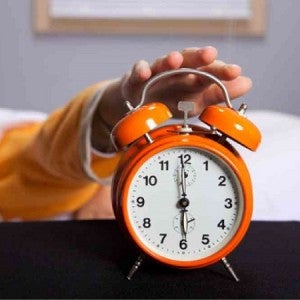 Most deadly heart attacks occur right after getting out of bed, so it is important to seek medical attention and not ignore these symptoms if you wake up with them.

MANILA, Philippines – A person’s risk of heart attack depends mostly on a familiar repertoire of factors: family history of the disease, high blood cholesterol or triglyceride levels, age, smoking, high blood pressure as well as the lack of physical activity.

However, our bodies’ circadian rhythms—otherwise known as the body’s built-in biological clock—also play a role, leaving us more prone to heart attack during certain hours than others.

“If you are guessing that the dangerous times of the day come at the end of an intense workout or stressful workday, guess again. Heart attack and all types of cardiovascular emergencies—including sudden cardiac death and stroke—happen in the morning, particularly right after waking up,” reminded Dr. Adolfo Bellosillo, head of the Makati Medical Center’s Cardiac Rehabilitation and Preventive Cardiology Unit.

The doctor, who is also president and founder of the Foundation for Lay Education on Heart Diseases, explained that the chance of having a heart attack between 6 a.m. and 12 noon is 40 percent higher than any time of the day.

More alarming is the fact that the relative risk increases by about threefold if one counts only the first three hours after waking up, according to Bellosillo.

This is why Bellosillo urged doctors to prescribe heart medicines when patients need them most.

“While it’s not easy to tell patients to take their medicines right after waking up—instead of taking them while taking breakfast—the fact that they could suffer from heart attack right after getting out of bed or while inside the bathroom should be enough reason to convince them,” he said.

Bellosillo also reminded that taking heart medicines with an empty stomach might actually be more effective than taking them with a full stomach. He said: “Absorption is key and if a particular heart medicine does not give you any upset stomach tell your doctor about taking it. Of course, the only exemption is aspirin, which should be taken with a full glass of water with meals or after meals to prevent stomach upset.”

He advised, “I guess this would really alarm a number of individuals with heart condition but try to avoid having sex right after waking up as sexual activity may be the worst thing you can do if you’re trying to avoid a heart attack.”

Bellosillo said that the reason behind the morning heart attack is the fact that the body demands more oxygen supply to support a number of bodily functions that happen in the first few hours after waking up.

He explained: “As we wake up and starts our daily physical activities, systolic blood pressure and heart rate show the largest upward spike in the early hours of the morning. The blood vessels’ ability to dilate in response to increased blood flow is compromised, blood clots are more likely to form, and the ability to break them up is at its lowest point in the day. All these factors not only lead to an increase in demand for oxygen but also contribute to the constriction of blood vessels.”

He added that there is also a greater chance of developing blood clot during these hours, which could further contribute to the reduction of blood flow or even blockade of the blood vessels heading to the heart.

All these cardiovascular functions, however, are generally not so dangerous to healthy individuals. “But if these changes occur in individuals with an already blocked or narrowed blood vessels, this could result in deadly heart attack or stroke,” Bellosillo warned.

Heart disease is the leading cause of death for both men and women. Citing the most recent Philippine health statistics data by the Food and Nutrition Research Institute of the Department of Science and Technology,  167,000 Filipinos die from heart attack and stroke each year, or about 35 percent of total deaths.

Half of these tragic deaths are related to high blood pressure. To date, there are almost 14 million Filipino adults aged 20 and above who have elevated blood pressure.

Considering that most heart attacks begin with subtle symptoms—with only discomfort that often is not described as pain—Bellosillo advised not to be tempted to downplay  or brush them off as indigestion or anxiety.

He said: “Don’t ‘tough out’ heart attack symptoms for more than five minutes. Call the emergency number or have someone brought you to the nearest emergency room.”