Out to sea– safely, fastly, conveniently 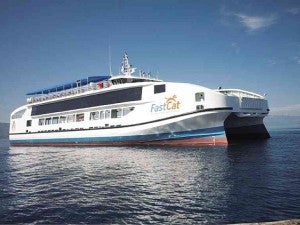 FAST Cat is the only vessel that offers special services for the disabled, including a wheel chair storage area and designated elevators.

Every minute of every day, somewhere among and between the 7,100 islands of the Philippines, a boat is sailing, a ship is navigating, a Ro-Ro (roll on-roll off) is transporting cargo and passengers, and seafarers are going about their merry business out there in the sea.

This is how Christopher S. Pastrana, chair of the board of the Archipelago Philippine Ferries Corp. (APFC), aptly describes the importance of the Philippine maritime corridor,  used by about 45 million people a year as a means to transport passengers, goods and services. And it is this reality and magnitude in numbers that inspired Pastrana and his team to fully commit to the upliftment of the maritime industry.

As a young man, Pastrana wished he could help make a positive contribution to the Philippine maritime industry which has always been perceived as outdated and below international standards. In the early ’90s, he would see the pitiable state of sea travel as he would sail to his father’s home town of Matnog in Northern Samar. 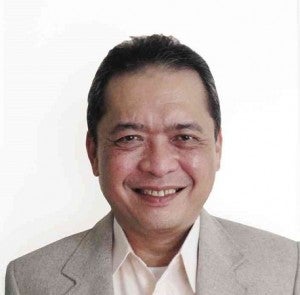 “Going around the Philippines is something we as a family and I as an individual love to do. I saw how bad traveling by sea was for an ordinary Filipino. It was not comfortable, the facilities, the toilets were bad and I thought it was not a decent way to treat a passenger. I thought someday,  I hope we can change all these,” Pastrana recalls.

Immersed in various businesses that move metric tons of bulk cargo particularly for the fertilizer industry under the Capp Group of Companies, Pastrana became directly involved eventually with shipping when their company bought the entire Ro-Ro division of the Philtranco bus lines.

With APFC incorporated in 2002, the company started to gain reputation as a trusted shipping company that owns and operates the country’s first and only catamaran Ro-Ro ferries. It also modernized ports and terminals in the eastern and western Philippine sea corridors.  The company endeavors to provide seamless maritime links from end to end, from Luzon to Visayas to Mindanao, for cargo, which comprises 65 percent of its business, and for passengers, which comprise the 35 percent.

APFC is also known in the industry to have pioneered the Roxas-Caticlan missionary route, which is now being plied by about 30 vessels from various shipping companies. 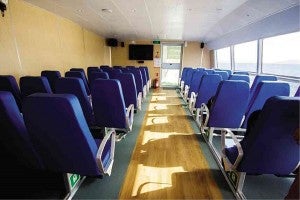 BUILT to accommodate up to 275 passengers, four buses or trucks, and 40 cars.

“We took a gamble to help nation building. There was a route but no one was serving it and we saw the missing link. When we started, there were zero passengers, walang kabuhay-buhay, there were nothing but rough roads and potholes, there was no economic activity. Before, when people transported goods from Roxas or Caticlan, they had to go around through Iloilo but when we opened the route, trade also opened,” notes Mary Ann Ibuna-Pastrana, APFC executive vice president and treasurer.

Determined to keep its promise to offer Filipinos state-of-the-art Ro-Ro vessels, while making passengers’ well-being and security a top priority,  APFC is investing millions of dollars to soon launch its new Ro-Ro vessels called Fast Cat Ferry. The first phase of this multimillion dollar expansion begins with the arrival of 10 ships this year; the second phase composed of 10 ships in 2014, and at least another 10, bigger ships for the third phase in 2017. 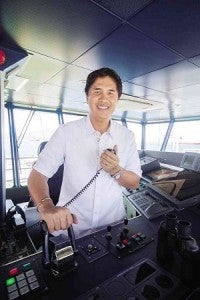 “With Fast Cat, we hope to provide Filipinos an easier way to travel and transport their goods across the Philippines, from Visayas and Mindanao, all the way to the markets in Luzon,” says Leo Peter Paul Gonzales, APFC president and CEO.

Built to accommodate up to 275 passengers, four buses or trucks, and 40 cars, the new ferry is set up at the ports of Batangas and Mindoro, the country’s biggest in terms of traffic volume, and charges low fare rates, ranging from only P120 to P330 with Economy, Premium Economy, or Business seat options.

Passengers enjoy access to a full entertainment experience, with on board Wi-Fi services, four LCD television sets, and a dedicated music lounge. There is also a well-serviced canteen, a spacious luggage area to store hand-carried items, and a car deck with electrical outlets for refrigerated container trucks and vans. 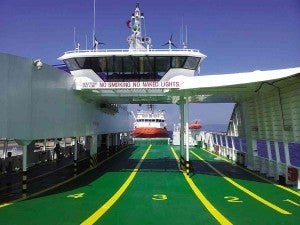 NO SLIM green aisle for cars.

Fast Cat is also the only vessel that offers special services for the disabled, including a wheel chair storage area and designated elevators.  Specifically designed by Sea Transport, a well-known Australian firm, and built by contractors from Singapore and Hong Kong, the 50.64-meter vessel is equipped with modernized and well-tested features that ensure both safety and efficiency.

In addition, the ferry vessel is comprised of two hulls, each with five bulk heads and a freeboard located four meters above sea level, enabling it to handle up to five meters of wave height in open sea and withstand typhoons up to Signal No. 2.

“Long haul sea travel and airplanes do not have the same niche as ours, the short ferry connections which will always be there.  The Filipino passenger, especially those coming from the D and E income classes, will consider it an alternative. The natural market of people taking the bus/ Ro-Ro will always be there. While airlines have weight restrictions, ferries do not have limit on what you can carry. It takes a lot to get to and from the airport if you go to the provinces, while the bus may take you right in front of your house. At the end of the day, it is cheaper for them to travel by bus because the islands have inroads which the bus can access. Cargo operation will always be there too, you cannot put a container van inside a plane,” explains Gonzales.

Pastrana is confidently claiming that the ferries they are soon welcoming to Philippine seas will revolutionize the industry as APFC is the only company that will provide brand new international class ferry boats.

“This is how we keep ahead of competition—and at the same time help uplift the maritime industry. We are spearheading a change in mindset, that we Filipinos deserve safe, fast, and convenient vessels to take us around the country,” Pastrana adds.

APFC is looking into new routes expectedly, to link up the entire country on the Eastern, Central and Western maritime corridors. Central Visayas will be its next market, with the ardent desire to bring Palawan closer to Luzon by providing service connecting the said province to Mindoro, all the way to Batangas to facilitate movement of goods to the touristic areas in Northern Palawan.

It is also keenly training its sight on international waters by 2015.

“We want to be able to expand to other Asean countries with the opening of the Asean sea link in 2015, we want to be ready for the time when our vessels will be able to call the major ports in countries like Indonesia, Thailand, Malaysia, Singapore, etc,” Pastrana optimistically notes.

Read Next
Shortage of cacao both a threat and an opportunity
EDITORS' PICK
IATF to LGUs: Issue ordinances vs attacks on frontliners, COVID-19 patients
Diokno to Duterte: OK to make fun of buck tooth, but focus on people’s needs first
10 Filipinos positive for COVID-19 in UK, 7 in Ireland — envoy
Nograles: Cabinet members to donate 75% of monthly salary to aid COVID-19 fight
Robredo spox thanks Duterte for defending VP’s efforts vs COVID-19
Quick chat with Nicole Andersson: ‘You really don’t need much to be happy’
MOST READ
Coronavirus hotbed Rizal to shut borders on April 6
Sotto on Isko Moreno’s call: We do our job without the media following our every move
‘Money Heist,’ ‘Tales from the Loop,’ ‘Killing Eve,’ ‘Never Have I Ever,’ ‘After Life’: Five not-to-be missed series this April
ADB warns PH against prolonged lockdown
Don't miss out on the latest news and information.