Shortage of cacao both a threat and an opportunity 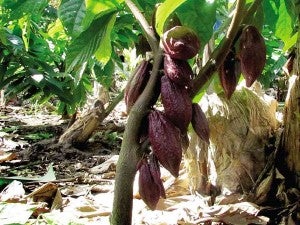 THE PHILIPPINES has to develop 150,000 hectares more for cacao production by 2020.

DAVAO CITY—Our favorite chocolate bars such as Toblerone, Meiji and those made by other popular companies might not be going out of the shelves soon but with the continuing downtrend in world cacao supply, they could be priced too high that we won’t afford them anymore.

“One thing is for sure. There is a shortage of cacao all over the world,” Dante Muyco, vice president of the Cacao Industry Development Association of Mindanao Inc. (Cidami), tells reporters here.

Edwin Banquerigo, national cacao industry cluster coordinator of the Department of Trade and Industry (DTI), says the global cacao situation was real and that supply would soon be so scarce confectioners and manufacturers of other chocolate products would be having a hard time meeting demand.

This, he says, would result in price increases as companies would be spending more to ensure they would get raw beans for their production.

Banquerigo says the global cacao supply shortfall was projected at one million metric tons by 2020.

Muyco says the scenario might be bad but it would be a good time for Filipino farmers to make more money by shifting to cacao bean production.

“The best time to plant is now,” he says.

“Today, when the world is confronted with cacao supply shortage, is the best time for those who are already engaged into it to increase their areas,” he says.

Seventy-five percent of these come from Southern Mindanao, which has over 13,000 hectares planted to cacao.

Banquerigo says based on government projection, the country has to develop 150,000 hectares more for cacao production by 2020 if it wanted to significantly contribute to the increase in global cocoa production.

“It is also at the gathering where government shall lay out its plans and programs to bolster the cacao industry especially on production,” Banquerigo says.