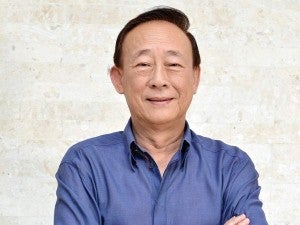 GEORGE Yang is the honorary consul general to Eritrea, a country in Africa.

When entrepreneur/tenor George Yang was introduced during the Agora Awards, the emcee mentioned his CDs which make a pun of his name—“Forever Yang,” “Yang at Heart,” “The Night is Yang,” “Always Yang.”

George says, “Before I sang, I said my next CD would be titled ‘Old Now.’”

It’s been 31 years since Yang launched the fast-food phenomenon in a joint venture with the US-based McDonald’s Corporation.

Since 2005, the business has become a fully-owned Filipino enterprise under the Golden Arches Development Corporation (GADC) of which he is the chairman.

Although Yang invited Andrew Tan of Alliance Global Group Inc. (AGI) and Megaworld to buy out the American owners, he underscores that his family maintains 51 percent ownership. He dispels the misconception that  he sold his shares and that AGI owns McDonald’s.

“We have more control now than ever before. The franchise was given to me and my immediate family members. If I’m not around anymore, it will be handled by my children,” says Yang.

Children to take over

His son Kenneth, GADC president and managing director, practically grew up in the business from summer crew to being involved in different departments. He rejoined the company when he got his MBA from the University of Chicago.

Yang explains that the lack of understanding of the local culture of the erstwhile American partners made it challenging for him to bring the business forward and quickly.

“My motivation was to do what was needed to improve the business,” he says. “I’m practically the only original partner in Asia left. I bought them out instead of selling.  In other Asian countries, they sold out to cash in on more investments. The fact that I’m still here means the Americans have faith in me.”

Since the Filipino takeover, sales have been brisk.

“We went from a so-so company to a more dynamic and profitable one. Customer counts have doubled per store. Store sales have been improving,” says Yang. “We could move faster and be more flexible with decisions on where to put our money, purchase a property, and when and where to put our stores.”

He feels that the market isn’t quite saturated with the iconic golden arches. “We are expanding our commissary in Marikina. The meat plant is there. It has become too small for our 350 stores. Our target is to have 500 stores by 2015,” Yang declares.

Although the business can run by itself, his opinion is still sought. He adds, “If I see something that needs to be done, I will ‘suggest’ to them. Let’s put it that way. I’m involved in strategic and major investment decisions such as buying and selling properties.”

On competition, Yang just looks the other way. “We concentrate on strengths and not pay too much attention to what other people are doing.”

Aside from the consistency in food, efficient service and cleanliness, Yang cites employees—all 25,000 of them—as among McDonald’s strengths. “The employees are focused. We are in sync with each other.”

Yang is also one of the founders of the Bistro Group of Companies which owns some 50 restaurants such as Italianni’s, TGI Friday’s and Fish & Co.

The clever businessman strikes where the iron is hot. “There was an opportunity to be involved with other partners and other brands. I’m involved in the board level. The Bistro restaurants don’t compete directly because they are casual dining concepts.  McDonald’s is fast service,” he says.

Then there are the real estate developments. In Boracay alone,  Yang has established partnerships. His real estate company First Georgetown Development has formed a joint venture with Global Estates Resorts Inc. (a company of Megaworld) to develop Boracay Newcoast.  He is also setting his sights in Palawan.

When Yang was chair of the Caticlan International Airport and Development Corporation (CIADC),  he got the license to run the airport and do the ground work for the project. When San Miguel showed interest in the project, he sold a substantial amount of his shares.

“We got the approval of government for the first private airport. It’s a long term project that can take seven years. Since San Miguel is into infrastructure, we decided to sell it. They can do a better job and make the airport bigger than what we had envisioned.”

On the request of SMC president Ramon Ang, Yang was asked to stay as vice-chairman of CIADC.

“In all, the projects are not very big but they are coming along. I’m known as McDonald’s guy,” he says.

Yang points out that his cartoon licensing is not publicly known. Another son, the Wharton-educated Kristopher, manages Fun Character’s International, the Disney licensing, out of Singapore. The younger Yang also manages another character licensing company, Mint Brands, which represents Cartoon Network and Hit Entertainment.

On the Disney licensing, Yang sought them out.

“Walt Disney characters were popular but not well represented. I saw an opportunity. Disney wanted to focus on China so they sold me the Asean businesses. I have offices in six countries,” he says.

“It’s all about marketing. We give licenses to other companies to use the Disney brands. And it’s not just Mickey Mouse but every movie that has popular characters. Those need to be sold through merchandising. That is where our people are good at. We seek manufacturers and retailers. We helped them create products. It’s a people business. You don’t invest in anything but creativity. You don’t own the product, but you help people create the product and they pay you. They use your brands like Lion King, Little Mermaid, Donald Duck, Ironman and other Marvel Superheroes.”

Needless to say that he has a family of entrepreneurs. Before McDonald’s, he helped his wife to set up Kristine Jewelry. His other children have the entrepreneurial DNA. Richmond, a restaurateur, established Big Buddha Restaurants Inc. which handles Chili’s, Super Bowl, Texas Roadhouse Grill, Nanbantei and Yomenya Goemon Japanese Spaghetti House and another company that imports foodstuff.

His daughter Karine, a Stanford graduate, gave up her job in the Silicon Valley to pursue her passion in patisserie. After studying in Paris, she set up Chez Karine Bakery at Serendra which has been getting rave reviews. Yang was involved in the children’s businesses by providing initial capital.

“We are busy but cohesive as a family. That’s a blessing God has given me.”

Aside from providing livelihood to people, Yang serves the country as an honorary consul general to Eritrea, a country in Africa.

“Many students come here and the Philippines is beginning to send workers to their mines,” he says.

Beyond business, his heart lies in philanthropy and music. His Klassic Music Foundation has supported many scholars who came from indigent families. On December 9, he will showcase 28 scholars in a concert at the Philam auditorium.

“God gave me the opportunity and the gift to sing at my advanced age. It has enhanced my life. I want to give back,” he says. Aside from helping students who have the talent but not the means, he also wants to educate the public, accustomed to pop music, on the finer music such as Filipino and Western classics and Broadway songs.

On corporate social responsibility, McDonald’s has been involved in building villages for the homeless and helping indigent patients. However, education has been the foundation’s main thrust such as providing materials for legions of schools and collaborating with the Department of Education.

“These things don’t translate to immediate sales, but it makes us better citizens,” he says.