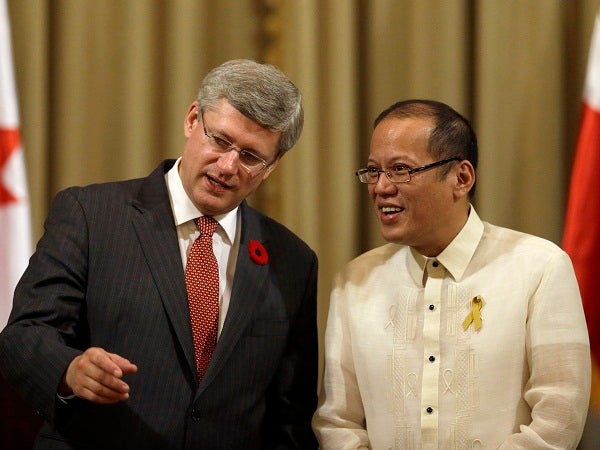 BULLISH OUTLOOK. Visiting Canadian Prime Minister Stephen Harper, left, gestures following a joint news conference with President Benigno Aquino III on Saturday, November 10, 2012 at Malacañang Palace grounds in Manila, Philippines. It was the first visit by a Canadian head of state in 15 years which was aimed at strengthening relations between the two countries. Canada is home to hundreds of thousands of Filipino immigrants. AP/Bullit Marquez

Visiting Canadian Prime Minister Stephen Harper sees the Philippines as “an emerging Asian tiger,” agreeing with the bullish outlook on the country of political and business leaders from many other parts of the world.

To demonstrate Canada’s confidence in the Philippine economy, Harper pledged to increase Canadian investment in the country during his meeting with President Aquino in Malacañang on Saturday.

Bilateral trade between Canada and the Philippines amounts to US$1.5 billion.

Mr. Aquino and Harper agreed to cooperate on defense and trade, and committed to people-to-people exchanges between the Philippines and Canada.

At a joint news conference, Mr. Aquino and Harper announced that the Philippine Department of National Defense and the state-run Canadian Commercial Corp. had signed a deal to help Manila buy military equipment to defend its territory.

The deal was signed amid a territorial dispute between the Philippines and China over islands and waters in the West Philippine Sea (South China Sea).

President Aquino said the deal would help the Philippines build up its defense and security capabilities. He declined to elaborate.

But Harper said the deal would “enable the Philippines to acquire the equipment and expertise it needs to fulfill the country’s defense and security agenda.”

Under the deal, Philippine purchases of equipment and expertise from Canada’s C$12.6 billion (US$12.6 billion) defense industry are guaranteed by the Ottawa government, according to a Canadian government statement.

Mr. Aquino and Harper discussed the progress in the Aquino administration’s good government program and the gains in the peace process, particularly the signing of framework agreement for peace with the Moro Islamic Liberation Front.

At the news conference, Mr. Aquino and Harper did not cite specific amounts for Canadian investment, but Harper described the Philippines as an “important economic partner” and an “emerging Asian tiger.”

Mr. Aquino said the Philippines was open for business under a new management, and that he saw the visit of Harper as a “recognition of the change of atmosphere in the Philippines.”

“We do see increased commercial trade ties between our countries,” Mr. Aquino said.

He said it was “logical to assume” that the $1.5 billion two-way trade between the two countries is “just the starting point.”

The two leaders witnessed the signing of the defense deal by Defense Secretary Voltaire Gazmin and Canadian Minister for International Trade and Asia-Pacific Gateway Ed Fast.

“This will help us in our efforts to build our defense and security capabilities,” Mr. Aquino said, welcoming Canada’s help in the much-delayed modernization of the Philippine armed forces.

The Canadian Commercial Corp. serves as a go-between for Canadian suppliers and foreign governments to transact defense and security contracts.

The Philippines has been in the market for patrol vessels to protect its waters, including areas that overlap with territory claimed by China.

Manila’s military treaty ally the United States is set this year to deliver a second refurbished Hamilton-class cutter, previously used by the US Coast Guard, to the Philippine Navy.

Last month, the Philippine Coast Guard announced it would buy five patrol boats from France for about 90 million euros (US$116 million), partly to guard disputed areas in the West Philippine Sea.

Harper and his lean delegation arrived in Manila Friday night.

He was accorded military honors on the Palace grounds when he showed up at 10:30 a.m. Saturday.

He then proceeded to sign the presidential guestbook before he and Mr. Aquino sat for discussions in the Music Room.

This was followed by an expanded bilateral meeting at the Aguinaldo State Dining Room and the signing of the defense deal and issuance of a joint press statement at the Reception Hall.

A state luncheon at the Rizal Hall hosted by Mr. Aquino in honor of Harper and his wife, Laureen, ended the official visit of the Canadian prime minister.

Harper was scheduled to fly back to Canada at 9:30 a.m. Sunday.

Harper’s visit is the first by the highest Canadian official in 15 years. The last Canadian head of government to visit the Philippines was Prime Minister Jean Chretien, who brought a business delegation to Manila in 1997.

“Our government is taking actions to aggressively expand commercial relations with the entire Asia-Pacific region. We’re doing so to help create jobs, economic growth and a better quality of life both in Asia and in Canada,” Harper said at the official reception.

Harper disclosed the “many ties that bind” Canada and the Philippines such as the Foreign Investment Promotion Protection Agreement signed in 1995, and the growing people-to-people links.

There are nearly 800,000 Canadians of Filipino descent living and working in Canada.  With a report from AFP