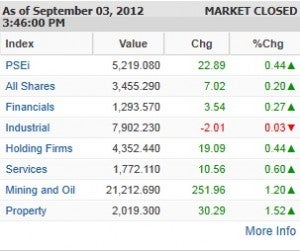 MANILA, Philippines—Most local stocks reversed a sluggish opening on Monday, allowing the main index to climb back to the 5,200 level, as global monetary easing hopes lifted most regional markets.

The main-share Philippine Stock Exchange index added 22.89 points, or 0.44 percent, to close at 5,219.08. The market was initially in the red as regional markets were spooked by a disappointing China factory data but swung to positive territory in the afternoon on growing expectations that major central banks would loosen monetary policy.

The day’s upswing was led by the property counter (+1.52 percent), which benefited from expectations of further monetary easing. A research by property consultant Colliers International also showed room for property values and rental rates in the Philippines to go up in the next 12 months.

The mining/oil counter likewise gained by 1.2 percent. On the other hand, only the industrial counter (-0.03 percent) declined.

Value turnover amounted to P4.28 billion. There were 88 advancers versus 69 decliners while 30 stocks were unchanged.

Among non-index stocks, the notable gainers were Security Bank (+3.45 percent), Century Properties (+4.76 percent) and Pepsi (+3.35 percent). I-remit, though not part of the 20 most actively traded stocks, was the day’s top gainer (+21.67 percent) after announcing a stocks buyback program.

Meanwhile, the index stocks that declined for the day were SM Prime, MWC, AEV, AP, JFC and BPI.

“It is time for the two main western central banks to deliver. We know more about the intentions of the US Federal Reserve bank since Friday; later in the week the ECB [European Central Bank] will provide more details about its action plan in order to save the euro,” investment bank Credit Agricole CIB said in its commentary on Monday.

“In any case, global growth needs some support. Whatever indicator you look at the conclusion is similar—momentum is seriously weakening,” Credit Agricole CIB said, noting, however, that “whatever this depressive impression of a breakdown of the global economy is, market sentiment is not that bearish.”