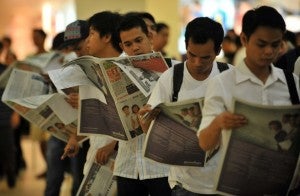 Job applicants browse newspapers for job vacancies as they queue up at a job fair in Manila in this file photo. Despite the respectably high economic growth rate that the country registered in the second quarter of 2012, the Philippines has the worst unemployment rate in Southeast Asia, according to Ibon Foundation. AFP PHOTO/TED ALJIBE

MANILA, Philippines—Despite the respectably high economic growth rate that the country registered in the second quarter, the Philippines has the worst unemployment rate in Southeast Asia, independent think tank Ibon Foundation has pointed out.

“The Philippines’ average economic growth is reportedly higher than some Southeast Asian countries but at the same time, it also has the worst unemployment rates in the region,” Ibon Foundation Executive Director Sonny Africa said in a statement.

The government had reported that the country’s second-quarter Gross Domestic Product (GDP) grew by 5.9 percent year on year.

This was higher than the average growth of the region at 4.7 percent and faster than that of Malaysia (5.4 percent), Thailand (4.2 percent), Vietnam (4.4 percent), Singapore (2.0 percent), although lower than Indonesia’s 6.4 percent and China’s 7.8 percent.

Africa, however, said, citing 2011 official figures, that the Philippines unemployment rate was “the worst in Southeast Asia and more than double the regional average.”

He added that the disparity between the high GDP growth and the unemployment rate “further highlights the exclusionary character of the country’s growth.”

“The country’s unemployment crisis will remain unresolved without a genuine thrust to develop Filipino manufacturing and domestic agriculture,” Africa said.

“Unfortunately, the government persists in promoting low employment and low value-added sectors such as business process outsourcing (BPO), mining, tourism, enclave manufacturing for export, and cheap labor export. These are sectors where foreign investors and economies benefit disproportionately more than Filipinos,” he said.