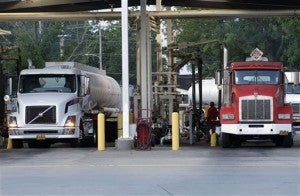 MANILA, Philippines – A militant activist group on Tuesday slammed oil companies for their retroactive oil price increases after a price freeze last week due to the floods brought by the southwest monsoon.

“The retroactive increases defeated the purpose of the price freeze implemented by the oil firms, which was supposedly done in the spirit of sacrifice and sharing the burden amid a calamity,” it said.

Metro Manila and several surrounding provinces were hit by severe flooding after the southwest monsoon brought torrential rains for several days. A state of calamity was declared by many local governments and a price freeze was implemented in those areas.

The prices of oil products such as unleaded gasoline were hiked by P1.80 per liter, regular gasoline by P1.70, kerosene by P1.60, and diesel by P1.50 on Monday.

“As it turned out, the price freeze was just meant to temper public outrage over the shameless greed displayed by oil firms after hiking petroleum prices during the height of the flooding and devastation brought by the monsoon rains,” CAOPI said.

“Oil companies will not just recover supposed foregone revenues due to the price freeze but will even likely earn more because oil demand last week could be smaller than normal due to the floods,” it added.

CAOPI argued that oil companies are capable of absorbing the losses from the price freeze because “petroleum products are overpriced internationally and domestically.”

The group also followed up on the “independent review panel” headed by former Budget Secretary Benjamin Diokno that intended to look into the alleged overpricing of oil products. It said that the review should have been finished last July but the findings have yet to be made public.

Bayan renewed their calls for Congress to repeal the Oil Deregulation Law which it claims allows oil companies to “adjust prices at whim.”