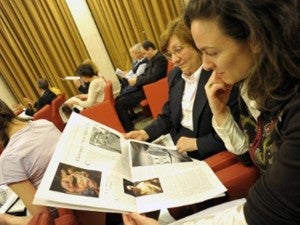 In a survey covering 744 firms of 10 major stock markets in the Asia-Pacific, McKinsey said women on average account for only six percent of board seats compared to 17 percent in Europe and 15 percent in the US.

Women hold eight percent of executive committee seats in the Asian firms, still lower than the average of 10 percent in Europe and 14 percent in the United States, it said, calling the numbers in Asia “strikingly low”.

“It’s a huge waste of talent, as half of Asian graduates are female. And it is a waste that Asian companies can ill afford, given the severe shortage of senior managers in the region,” said the report titled “Women Matter”.

Australia, Hong Kong and China topped the list of female presence in the boardroom, with women accounting for 13, nine and eight percent respectively in these top jobs, while South Korea, Japan and India were at the bottom.

In South Korea, where a conservative culture makes women’s “double burden” of career and household duties particularly heavy, women take up only one percent of boardroom seats.

Japan came next from bottom with only two percent of such jobs held by women due to similar pressures on them to be a sole caregiver of the family, it said, adding about 60 percent of Japanese women quit or change jobs after marriage.

The number hovers slightly higher at five percent in India.

Such “double burden” pressure was a dominant reason for women in the two economic powerhouses in northeast Asia as well as in India to leave jobs, while it had a far less influence in places like Singapore and China, it said.

“The double burden affects women in Europe, too. But inarguably, it is particularly heavy for Asian women… also because there is a lack of government support in areas such as childcare,” it said.

China fared better than most other neighbours but the situation in Asia’s biggest economy is hardly satisfying given it has one of the world’s highest female labour participation rates, the report added.

“The study finds that… gender diversity is not yet high on the strategic agenda for most Asian companies, and few senior managers believe this will change anytime soon,” McKinsey said in its first study on women in corporate Asia.

“Given tight labor markets and intense competition for talent across Asia… gender diversity needs to become a corporate priority,” said Claudia Sussmuth-Dyckerhoff, co-author of the report.

The report noted Malaysia’s 30 percent target for the proportion of women at decision-making level in the public sector, and South Korea’s incentives for firms building daycare centers.