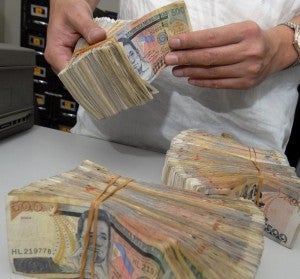 A bank teller prepares stacks of 500 Philippine peso denomination for the automated cash dispenser in this 2007 file photo. Banks posted the highest growth in both net profit and revenues among 254 publicly listed Philippine companies in the first quarter of 2012 according to a research by the Philippine Stock Exchange. AFP PHOTO/ROMEO GACAD

Publicly listed Philippine companies grew their net profits by an average 24 percent in the first quarter to P134.66 billion from P108.6 billion a year ago, with banking stocks outperforming all other sectors, according to a research by the Philippine Stock Exchange.

It said the 254 corporations listed on the local bourse—from blue chips to third liners—posted an 18.9-percent jump in consolidated revenues to P1.02 trillion in the first three months from P858.34 billion in the same period last year.

The financial sector posted the highest growth in both net profit and revenues as extraordinary trading gains in the first three months buoyed the bottom line of most banks, which are seen ending 2012 with another banner year. Being a cyclical counter, or one that tracks the performance of the overall economy, the better-than-expected 6.4-percent year-on-year gross domestic product growth favored the banking sector.

“The robust first-quarter results of listed companies validate the impressive performance our market has had so far, highlighted by the PSEi (main stocks index) rewriting record highs 19 times already this year. This also underscores the fundamental soundness of our companies, which add to their potential for consistent future performance,” PSE president and chief executive Hans Sicat said.

Securities trading gains were the main proponent for the 73.2-percent net income increase of firms in the financial sector.

Meanwhile, the consolidated profits of companies in the industrial sector increased by 31.9 percent, which the PSE attributed to non-recurring gains as well as increased contributions from subsidiaries.