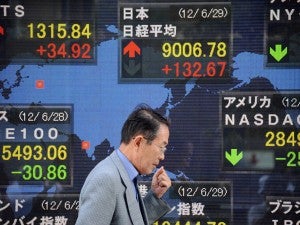 A pedestrian walks past an electronic stock indicator in the window of a securities company in Tokyo on June 29, 2012. AFP FILE PHOTO

Just before the opening bell, a quarterly survey by the Bank of Japan showed sentiment among major Japanese manufacturers had improved to minus one in June, from minus four in March.

That came after Wall Street posted a rise driven by the dramatic measures adopted in Brussels to stem the eurozone crisis and stimulate growth. The Dow Jones Industrial Average closed up 2.20 percent at 12,880.09 on Friday.

European leaders have agreed to use emergency funds to support ailing banks directly and to ease pressure on their countries’ public debt burdens, with plans to inject 120 billion euros ($150 billion) worth of stimulus into the continent’s economy.

“Most of the sentiment for Japan shares is benefiting from news out of Europe,” said CLSA equity strategist Nicholas Smith.

“For the first part of Monday’s session there will be a scramble to cover short positions, but whether or not this invites fresh funds to the market remains to be seen,” he added.

However, analysts said political uncertainty in Japan may weigh amid reports that about 50 lawmakers could leave the ruling party along with one-time leader Ichiro Ozawa over Prime Minister Yoshihiko Noda’s efforts to raise sales tax.

Pressure on Noda’s government has been stoked by a wave of anti-nuclear sentiment accompanying the restart of an atomic reactor, with tens of thousands of people protesting outside his central Tokyo residence on Friday.

On currency markets, the dollar was quoted at 79.77 yen in early Asian trade Monday, from 79.83 yen in New York late Friday.