Doctor turns back on practice to nurture own agribusiness 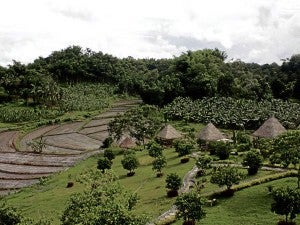 JANIUAY, ILOILO—He would hie off to his family’s farm in Barangay Damires in this northwestern town to plant mahogany and fruit trees to take the stress off.

Now, the farm of internist-cardiologist Louie Tirador has been turned into a paradise for nature lovers.

The more than a thousand trees that have been planted are now home to various birds, monitor lizards and other creatures.

Tirador said that the idea to plant trees to de-stress was inspired by his daughter Anika and her friends from Assumption Iloilo who went to the farm in 2007 to plant trees as part of a school activity.

“There were a hundred Assumption students who planted trees with my daughter, and they were sitting on the upland area among the bamboos. I realized that it was a beautiful scene,” said Tirador, 51.

The anti-stress hobby of tree-planting has since given birth to a mini-forest, orchard, biking trail, a zipline, an infinity pool, cabanas, an adventure park for children, which includes a trampoline and a mini-zipline, a convention center, and rope courses for team-building activities.

As one of the heirs of his grandfather Federico P. Tirador Sr., the doctor was left with 50 hectares of hills, valleys and rice land. 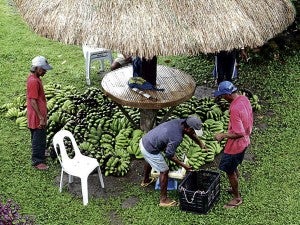 RESORT guests are in for a fruity treat. Photo by Hazel P. Villa, Inquirer Visayas

A portion of the land was planted to sugarcane, but had been left idle for 20 years.

Tirador decided to plant it with trees. He later built a resthouse for his family and friends who came to the farm.

Without realizing it, he started calling his farm “Damires Hills” taken from where it is located—the barangay of Damires.

Word went around town that the doctor owned “a nice place for picnics and hanging out.”

Damires Hills instantly turned into a resort when visitors just started to drop by especially since it was accessible.

Located by the side of the national road going to the nearby town of Badiangan, Damires Hills is about 33 kilometers northwest of Iloilo City, just outside Janiuay.

Tirador admitted that developing Damires Hills was a learning process.

One important lesson was not to interfere with nature’s designs.

“I only learned later that I should be planting endemic species like bayoko (a hard wood), acacia, narra, santol, langka, durian, rambutan, lanzones, guayabano, giant lomboy, cacao, coffee, star apple, and pomelo,” said Tirador, who has started to develop 20 hectares of the 50 hectare-property.

“As much as possible, we didn’t destroy the contour and had minimal interventions. What you see is the original terrain,” he explained.

These can all be rented out by the day

Native fares are also served at the restaurant just below the main cabana.

Visitors can choose from a 180-meter and 370-meter lines that run through a forested area and terminate near the rice paddies.

Visitors to Damires Hills find the resort not only relaxing but also an ideal place to participate in the typical farmer’s life of planting rice, harvesting bananas and fruits and even riding a carabao caroza (bamboo cart drawn by a water buffalo).

The entrance fee is P50 per person and P40 for senior citizens and children.

As an accidental farmer and now, resort owner, Tirador plans to turn Damires Hills into a place where children can hold educational tours for them to learn to love nature.

For Carol Deduro, a tour operator based in Iloilo City, Damires Hills is best for those who want a balance of the rough side of nature and the comforts of a middle-class resort.

“It is near enough, affordable, and has just the right amount of activities for us who want a short stay,” said Deduro.

Tirador is happy with how a formerly idle farm is now catering to his passion for the environment, and has become the ideal location for harassed folk seeking to commune with nature.

Read Next
PH takes debate on energy future to the road
EDITORS' PICK
Cherry Mobile teams up with Cloud Panda PH, launches online store
DOH: COVID-19 mortality doubling time, transmission rate down
Someone from the Philippines can become $356 Million richer this Tuesday
Leveling up your ‘lutong bahay’ with the kitchen companion you never knew you needed
Congress urged to extend session for approval of COVID-19 response bills
Amid protests, Trump talks of war — and reelection
MOST READ
‘If I had not been SolGen, I will make you eat your words,’ Calida tells Coco Martin
51 percent of German firms holding back investments in PH, but not because of COVID-19
Chaos as thousands return to work in Metro Manila
Pia Wurtzbach confirms dating Jeremy Jauncey
Don't miss out on the latest news and information.