PH takes debate on energy future to the road 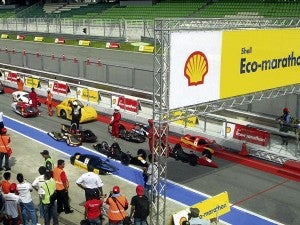 THE Shell Eco-marathon concept began in 1939.

The Philippines is taking the debate on the “future of energy” to the road.

From 2014 to 2016, the country will play host to the prestigious Shell Eco-Marathon Asia, where some of the smartest innovations on sustainable mobility will compete to show the world how vehicles can drive past the borders of fuel efficiency.

“This successful bid to host the Shell Eco-Marathon Asia in 2014 dovetails seamlessly with the government’s drive to showcase the Philippines as a viable  and ‘fun’ venue for international events,” said Pilipinas Shell country chair Edgar O. Chua.

The Shell Eco-Marathon, an annual global event conducted by Royal Dutch Shell, aims to challenge student teams from around the world to design, build, and test  ultra-energy efficient vehicles. Individual legs are held in the Americas, Europe and Asia.

The Shell Eco-Marathon competition is not about breaking speed records, but rather about going the farthest while using the least amount of fuel or energy.

“The event provides a venue as well for energy-concerned individuals to debate about the future of energy while inspiring young and talented engineers from around the world to push the boundaries of energy efficiency,” added Simon P. Henry, chief finance officer of Royal Dutch Shell Plc.

This year, 141 teams from 18 countries  and territories across Asia will join the Shell Eco-Marathon in July.

Malaysia is hosting the Asian leg of the annual event until 2013, after which the Philippines will take over.

The competitions will be held at the famed Sepang Race Circuit in Malaysia from July 4 to 7 this year.

The Shell Eco-marathon concept began in 1939 when the “Shell Mileage Marathon” scientists in the US challenged each other in an internal competition to see whose car gave the best mileage.

The idea was resurrected decades later and inspired the introduction of the first Shell Eco-marathon Europe in 1985.

The Shell Eco-marathon Americas debuted in 2007, while that in Asia began only in 2010.

According to Shell, the marathon does not only aim to inspire engineering students to develop innovative approaches to mobility and fuel efficiency. It is also meant to help promote efficient energy use, address environmental concerns linked to the use of fossil fuels, understand current patterns of consumption and explore alternative energies.

Such innovations and inventions are necessary as global energy demand is expected to continue to surge, likely doubling by the end of the first half of this century.

By 2050, parent firm Royal Dutch Plc has estimated that the number of vehicles worldwide will rise from today ’s 900 million vehicles to about 2 billion.

And this, Chua had said, is not sustainable.

“What we need is a variety of fuels and techniques in order to meet this demand for growing mobility, while limiting carbon dioxide emissions, We can do this by a combination of new technology, new energy sources and what we call doing things smarter or smarter mobility,” Chua explained.

To achieve smarter mobility, three aspects need to be accomplished according Chua.

Smarter mobility means coming out with smarter products that can enhance fuel economy; Smarter use refers to improving driving behavior; and smarter infrastructure deals with having more efficient roads and mass transport systems.