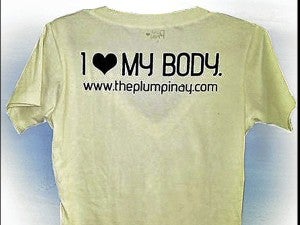 ‘EMBRACE that beautiful belly,’ according to the enterprising twins manufacturing plus-size clothing for women.

Twins Viderlina Adrianah and Viderlina Anastazcia Gutierrez are on a mission to establish a fashion company for women of all shapes and sizes here in the Philippines.

Viderlina Adrianah, or Danah as she is fondly called, remembered that it all started with a blog in 2009.

“The idea of making statement shirts and necklaces came from the readers of our blog. We wanted people to know more about our campaign, hence our website … with a simple statement of ‘P’ [which stands for] Proud or Plump Pinay,” she says in an e-mail to the Inquirer.

The twins’ campaign, advocating the creation of more clothes and accessories for plus-size women here, has been well received by their readers. They believe that if a woman likes what she wears then she becomes more confident of who she truly is regardless of her size. Through their blog, they have seared into the minds of their readers that there are more ways to be beautiful.

An excerpt from the introduction of their blog says it all: “This blog will tackle the true beauty of the Filipino woman. We want you to relate to the images that we will be posting. We want you to share as we share, vent as we vent, the struggles we’ve all had due to the booming imperative (and dangerous) persuasion of the media. It’s time to be really comfortable in your own skin. What’s the big, fat deal anyway?! Let everything bulge out! Embrace that beautiful belly.”

Stacy and Danah’s blog is mostly about their experiences with “kikay” stuff like hair dyes, eyelash extensions, trending clothes and accessories, and most importantly, life lessons on being plump Pinays.

Asked what inspired them to tackle the plus-size market, Danah answers: “Because we’re both plus-size! And there’s a scarcity of awesome and fashionable clothes for bigger women here in the country.” 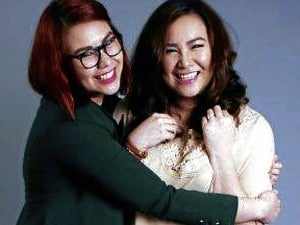 Danah and Stacy, both 21, embarked on a journey to explore the newly discovered market via the Internet. They searched for a shirt manufacturer and met up with people who could design and cut the shirt in a specific manner.

Danah took up Child Developmental Education while Stacy has a degree in Humanities from University of Asia and the Pacific.

“We had several [meetings] for the shirt design and cut because we wanted it to hug all the right curves of our buyers,” Danah says.

When the final design came out and both agreed that the simple shirt would indeed be a cut above the rest, Stacy and Danah posted their creation online.

“We launched the shirts at bloggers bazaar Part 1 and sold them for P350 each. Our “P” shirt was almost sold out,” says Danah.

With their savings of P15,000, they braved the odds and set up an online store.

At first, they had to deal with bad sizing. Danah recounts how some shirts came out smaller than the actual size. But that was just one of the numerous hurdles they had to overcome.

“Sometimes, shirts are being returned to be replaced … although the measurements of the clothes have already been posted. Sometimes, there are buyers who don’t push through with the payment,” Danah says.

Having an online store also has its advantages. For Stacy and Danah, they cite the convenience of not having to sit around a kiosk all day waiting for customers.

Danah also sees that the market for plus-size women here in the country is expanding. She attributes the increase of online stores who cater to plus-size women as well as the number of stores offering extended sizes as signs of good health for the once hushed market.

“Double-check everything and plan ahead,” those are the two lessons that the girls had to learn the hard way while setting up their online stores.

But for the twins who were born seven minutes apart, they knew that they were on to something big when they were running out of stocks and were informed that people were wearing their shirts and necklaces in public.

“It was such a blessed feeling,” Stacy says.

The twins also plans to put up their own retail store someday. But for now, they are focused on growing their capital.

“But the idea of putting up a local trendy plus-size powerhouse is very tempting. We have already considered the idea. And we really want to do this as well. It’s just all about the timing,” Danah explains.