All for God’s glory 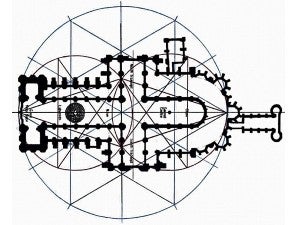 THE CHARTRES Cathedral, southwest of Paris in France, employs the principles of geometric proportioning using circles and their intersecting points to determine its dimensions or lengths in its floor plan.

It was probably what the masons were thinking as they laid stone after stone to build the Gothic cathedrals of Medieval Europe in the 12th century.  Gothic structures were designed to bring out feelings of exaltation and of awe. Their cavernous interior spaces, the seemingly endless long aisles and the lights from the stained glass windows could only but inspire. At their exteriors, spires reached for the heavens and tried to touch the face of God. In plan, its geometry of overlapping circles and intersecting triangles are locked together in perfection, as if achieving the faultless balance and workings of the universe. It had hoped to bring man closer to God.

The Greek prophet and mathematician Pythagoras shared the same sentiment in that math (and music), through some method beyond our comprehension, helped mankind achieve his union with God.  Like Pythagoras, other Greek mathematicians picked up where the Egyptians’ left off: while the Egyptians developed geometric applications through the process subdividing their land for agricultural purposes, the Greeks transformed these forms, sections and the lines that define them, into scientifically-sound numerical equivalents and formulas for practical use.

The Egyptians developed and designed many of their structures according to their “sacred proportions,” the design concept that carried “harmonic geometry” through a progression in numbers. These supposedly follow proportions seen in nature said to be consistent around us. It is known in modern times as the “Fibonacci numbers.” The progression starts with the numbers 1, 2 and 3, then adding 3 to 2 (5) then five to three (8), for a series that will run as 2, 3, 5, 8,13, 2, 34 and so on…. When obtained graphically, Fibonacci numbers graph into the “Golden Rectangle,” which was used as basis for many of the Egyptian structures, and is also represented by the spiral of a nautilus shell.

Many other forms grew out of this proportioning system—circles and stars included—and as people tried to cleave more to God, more shapes grew out to be divine.

But going back to the Gothic Cathedrals, their plans made use of simpler geometric proportioning systems developed from working with what could have merely been a straight-edge and a compass to conceptualize their plans. I sometimes wonder if this had anything to do with their lack of creative fluidity, having just come out of a mentally restrictive Dark Age.

Armed with geometrical logic, the architects and craftsmen designed not only forms and structures, but they crafted spaces that distinctly characterized the church architecture of that time—cavernous interiors that reach for the sky, diminishing the human scale and stressing the insignificance of man against God’s loftiness. How could one not be humbled? Together with the excessive amount of architectural detail and the dramatic control of natural lighting, what is created is a world where God must truly exist.

But the Divine will never manifest through stone and no amount of glorious architecture will give us that. Despite these “magic numbers” there is really no formula that can add up to the Divine. And research has proven that the nautilus—or any nautilus from nature for that matter—does not necessarily match with the proportions of the Golden Rectangle.

Perhaps what is more popularly known as “sacred geometry” is all wishful thinking. And while these monumental Churches beautifully decorate our earthly world and remind us of His magnificence (and not to forget, the power and strength of the Christian church), nothing cleaves closer to God—and is more glorious in contribution—than simply trying to emulate Him.