Keeping our voice in tip-top shape

The storybook success of eight-time Grammy winner Adele took a terrifying turn last year when the 23-year-old British singer-songwriter was diagnosed with a polyp in her vocal cord that had hemorrhaged. 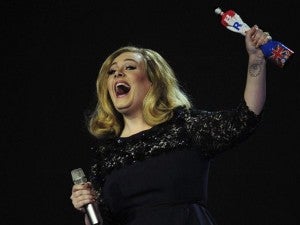 British singer-songwriter Adele celebrates with the British Album of the Year award for her album "21" at the BRIT Awards 2012 in London on February 21, 2012. AFP PHOTO / LEON NEAL

After undergoing a potentially career-ending throat surgery in November, she spent weeks recovering under orders to not speak or sing.

Fortunately, fate was on her side as Adele eventually returned to center stage last February—her successful rendition of her smash hit, “Rolling in the Deep,” at the 2012 Grammy Awards was hailed as a triumphant return.

But not everyone will be as fortunate as Adele and the public must realize that one doesn’t have to be a professional singer with chart-topping hits to suffer the same injury, informed Dr. Melfred Hernandez, Chair of the Philippine Academy of Laryngology and Phoniatrics, a subspecialty group of the Philippine Society of Otolaryngology-Head and Neck Surgery (PSO-HNS), which spearheads the April 16 celebration of the World Voice Day here in the Philippines.

“Adele’s career scare should serve as a wake-up call to everyone—including broadcasters, preachers, teachers and other individuals who do a lot of public speaking—that the voice has to be taken care of properly,” reminded Dr. Cesar Anthony Yabut, president of PSO-HNS.

The doctor shared that problems involving the vocal cords are way more common than what most people think and they affect not only singers.

Indeed, it is not unusual for us to learn of other people who get too emotional about issues involving the deteriorating condition of their voice. In so many instances, a number of them have even considered a career change after struggling so much in their search for a solution.

But there is good news. Like Adele, with proper treatment, people suffering from voice disorders can return to their own center stage, whether that’s inside a church sanctuary, classroom or behind a rostrum.

“Prevention, care and ways to resolve injuries are part of the focus of the society’s upcoming World Voice Day events,” Dr. Danilo Poblete, VP of PSO-HNS, said. He informed that the World Voice Day started a dozen years ago in Brazil after the World Health Organization had pointed out an especially high rate of laryngeal cancer in that South American country.

World Voice Day in the Philippines was first celebrated in 2006 and since then has provided PSO-HNS a perfect forum wherein its members can refamiliarize with the latest advances in laryngology and voice care, and educate its colleagues, patients and communities through lectures, free voice screenings, community outreach programs and other offerings.

While catching a common cold virus that causes laryngitis may be regarded as one of the leading cause of why our voice may sound hoarse or abnormal from time to time, the PSO-HNS cited other conditions and how to keep our voice in tip-top shape:

1Drink plenty of water. This can help your voice function better because your vocal cords must be well lubricated to vibrate with the least amount of friction. Avoid alcohol and caffeine (both drains the body of water) and instead eat lots of water-rich foods: apples, pears, watermelon, peaches, melons and grapes.

2Don’t smoke, or if you still do, quit. Smoking raises the risk of throat cancer tremendously, and inhaling smoke—even second-hand smoke—can irritate the vocal cords.

3Try not to scream or yell. These are abusive practices for your voice that put a lot of strain on the lining of your vocal cords.

4Use a microphone. This is probably the best solution to prevent screaming or yelling when giving a speech or presentation.

5Warm up your voice before heavy or prolonged use. Most people know that singers warm up their voices before a performance, yet many don’t realize that this same exercise could be useful to teachers, preachers, politicians and salespersons. Warm-ups could be simple, such as gentle humming exercises, lip or tongue trills and breath-stimulating exercises like “ya-ha-ha-ha-ha” with a release in between each note.

6Use good breath support. Breath flow powers your voice so take time to fill your lungs before starting to talk. Don’t wait until you are almost out of air before taking another breath to power your voice.

7Listen to your voice. When your voice is complaining to you (starting to get hoarse), listen to it. Modify and decrease your voice if you become hoarse as this will allow your vocal cords to recover. Pushing your voice when it’s already hoarse can only lead to more serious problems. If your voice is frequently hoarse or have been in such condition for an extended period of time, see an otolaryngologist (one that specializes in health issues affecting the ear, nose, throat and neck) who could do a proper evaluation.

8Use a mouth spray that relieves soreness and irritation of the mouth and throat. One mouth spray, known as Kamillosan M (Invida Philippines), is an effective over the counter remedy for sore, dry and itchy throat commonly prescribed by doctors. Kamillosan M combines the natural anti-inflammatory properties of chamomile with the antibacterial effect of seven essential oils (sage, dwarf pine needle, peppermint, bergamot, anise, cineol and methyl salicylate).

9Avoid clearing your throat too often. Clearing your throat is like slamming your vocal cords together and could eventually lead to a hoarse voice. Instead, sip water or swallow to quench the urge to clear. If clearing of your throat becomes too annoying, have an expert check you for conditions such as acid reflux disease, allergy or sinus conditions.

10Allow yourself several “vocal naps” if you will be speaking for longer periods. For instance, teachers should avoid speaking during the breaks between classes and find quiet ways to spend the rest period rather than conversing with other people.