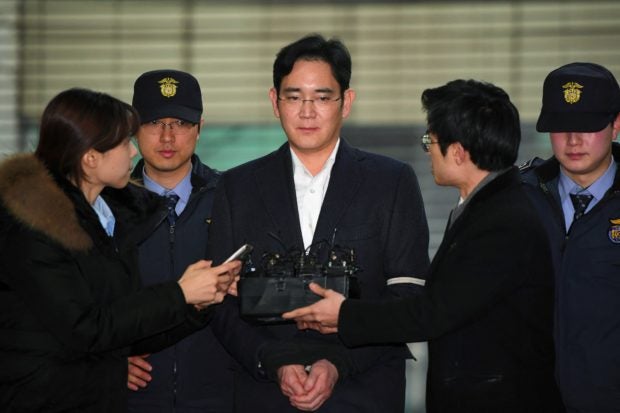 In this file photo taken on February 22, 2017 Lee Jae-Yong (C), vice chairman of Samsung Electronics, arrives for questioning at the office of a special prosecutor investigating a corruption scandal in Seoul.  (Photo by JUNG Yeon-Je / AFP)

Billionaire Lee Jae-yong, who was convicted of bribery and embezzlement in January last year, will be “reinstated” to give him a chance to “contribute to overcoming the economic crisis” of the country, Justice Minister Han Dong-hoon said.

Lee — the 278th-richest person in the world, according to Forbes, with a net worth of $7.9 billion — was released on parole in August 2021, after serving 18 months in jail, just over half of his original sentence.

Friday’s pardon will allow him to fully return to work by lifting a post-prison employment restriction that had been set for five years.

“Due to the global economic crisis, the dynamism and vitality of the national economy have deteriorated, and the economic slump is feared to be prolonged,” the Justice Ministry said in a statement.

The pardon was given so that Lee — and other similarly pardoned high-level executives — could “lead the country’s continuous growth engine through active investment in technology and job creation,” the ministry added.

Lee, 54, received his pardon along with three other businessmen on Friday, including Lotte Group Chairman Shin Dong-bin, who was sentenced to a suspended two-and-half-year prison term in a bribery case in 2018.

Lee is the vice-chairman of Samsung Electronics, the world’s biggest smartphone maker. The conglomerate’s overall turnover is equivalent to about one-fifth of South Korea’s gross domestic product.

He was jailed for offences connected to a massive corruption scandal that brought down former president Park Geun-hye.

There is a long history of top South Korean tycoons being charged with bribery, embezzlement, tax evasion or other offences.