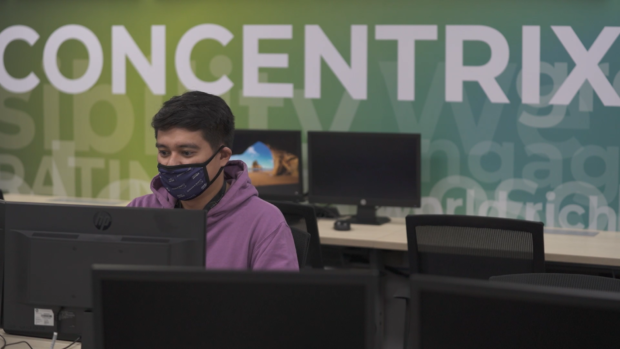 FILE PHOTO A BPO worker wears his face mask while working on his desk.

MANILA, Philippines — On the day the government ordered business process outsourcing (BPO) firms to report back to the office, the largest of them decided to keep working from home, ready to pay higher taxes than spend more in regular office operations.

Concentrix, a BPO firm with a 100,000-strong workforce, has kept a hybrid work setup since 2020. This didn’t change, even after the return-to-office mandate took effect on April 1.

Most of its workers, or 60 percent of them, have been working from home, while the rest have reported back to the office.

Michael Montero, the company’s regional general counsel in the Asia and Pacific, said there are practical reasons why the company was ready to lose their tax incentives, rather than require all their workers to return to their workplaces.

He said the clients of Concentrix, which has nearly 50 sites in the Philippines, wanted to continue to work from home and so did their employees.

“Because if the employee is the one really attending to the needs of the customers of our clients and they are happy where they are, the customers will also be satisfied. From the perspective of our clients, they wanted to retain that kind of [result],” Montero said in an online interview.

Under a remote setup, both customer and employee satisfaction ratings have gone significantly higher than before, Montero said, although he deferred from disclosing specific figures.

When Concentrix surveyed 10,000 of its workers last March, 80 percent of them said a return-to-office order would affect their decision to stay in the industry, Montero said. Its clients also had reservations, he said, since offices would have to close—and therefore operations would be disrupted—in cases of COVID-19 outbreaks. A hybrid setup would be more insulated from the risks.

“We tied those two [conclusions] together. The clients are the ones who prefer it. The employees also want it,” he said. “By and large, we need to retain the status quo.”

But keeping a hybrid work setup would mean letting go of tax breaks, including a 5-percent gross income earned tax, which BPOs in economic zones pay instead of other taxes, like the new 25-percent corporate income tax. The BPO industry now has 1.4 million workers and was one of the few industries the government didn’t close at the start of the lockdown in March 2020.

Meanwhile, the interagency Fiscal Incentives Review Board (FIRB), which oversees the grant of tax breaks to qualified businesses, on Thursday reiterated that working from home among BPO firms operating inside economic zones was only a temporary measure during lockdowns.

“The government has exercised significant caution in balancing the economy’s needs and the health requirements to address concerns the pandemic caused. However, we believe that the current situation already allows us to direct our policies toward fully reopening the economy,” FIRB secretariat head and Finance Assistant Secretary Juvy Danofrata said in a statement.

“Given the increasing vaccination rate of Filipinos nationwide, we can now undertake safety measures for the physical reporting of employees,” Danofrata added.

Last month, Finance Secretary Carlos Dominguez III, who chairs the FIRB, said it would ultimately be up to BPO companies if they wanted their current work-from-home operations to continue, but they can’t enjoy tax perks if registered with the investment promotion agencies giving them away.

The FIRB had thumbed down the BPO players’ plea to extend their work-from-home setup while continuing to enjoy tax exemptions.

The Bureau of Internal Revenue had already been tasked to collect monthly income tax from BPO firms whose workforce will fall short of the full-capacity requirement starting this month.

Loophole to allow remote work for 30% of BPO staff