What impact will the sanctions have on Russian debt? | Inquirer Business
Close
menu
search

What impact will the sanctions have on Russian debt? 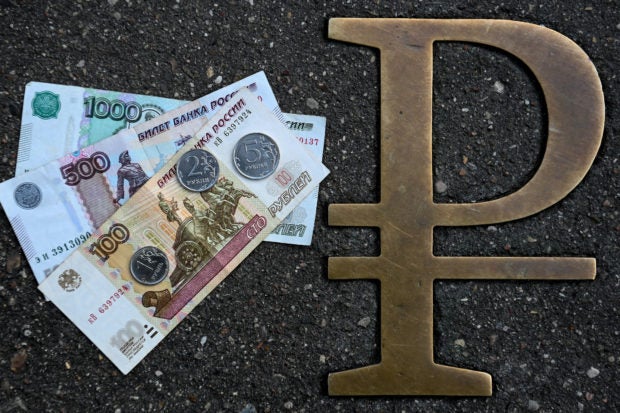 PARIS — The financial sanctions adopted by Western countries on Russia over its recognition of breakaway Ukrainian territories include limiting Moscow’s ability to issue debt on international markets.

What impact will this have on investors and on Moscow?

How do countries finance themselves?

Most countries need to borrow large amounts of money to finance their public spending. They issue debt obligations, which are called bills or bonds, and are bought by a range of investors including banks, pension funds, insurers and others. The duration of the bond, the payment calendar and interest payments are determined in advance. This is called the primary debt market. The secondary market is where investors sell the debt amongst themselves.

Countries frequently issue new debt to reimburse bonds coming due. This is called debt refinancing. As long as investors have confidence in a country, it can borrow at reasonable rates.

What do the sanctions change?

US investors will not be able to buy Russian bonds issued after March 1. Russia will also be banned from European markets to refinance its debt. Japan plans to ban both the placement of new Russian debt and the trading of its bonds in the secondary market. Canada has also banned trading in Russian bonds.

What other options for Russia?

“Now what they will do is rely only on domestic sources and on the domestic market, which is small, in order to finance themselves,” said Kaan Nazli, an economist and asset manager who specializes in emerging market debt at Neuberger Berman.

“If it was an emerging market like for example Turkey or South Africa which rely fully in the financial market for their budget deficit it would have been a much bigger issue but because of Russia’s balance sheet being very strong … it’s not something that is disruptive for them,” he added.

What impact on Russian finances?

For UBS economist Anna Zadornova “the fiscal implications from the restrictions on the new sovereign debt issuance are limited by the low level of public debt” that Russia has. At 16 percent, Russian public level debt is low.

Zadornova also pointed out that Russia  benefits from higher than planned revenue, which is in part due to the high energy prices.

Russia also has the capacity to raise ruble-denominated debt on the domestic market.

According to Bloomberg data, foreign investors hold only a little over a quarter of Russian government bonds.

Zadornova said that apparently the initial sanctions will not force international investors to liquidate their holdings of existing Russian bonds, nor force their removal from bond indices.

Nevertheless, she said liquidity in the market for Russian bonds is likely to be become thin as investors worry about potential restrictions.

Russia’s finance ministry said Wednesday it would evaluate market conditions in a review of whether to hold auctions of government bonds in the coming weeks.

It cancelled an auction due to have been held on Tuesday due to market volatility.

Freeze or full invasion? Scenarios for Russia in Ukraine

US and allies unveil more sanctions against Russia