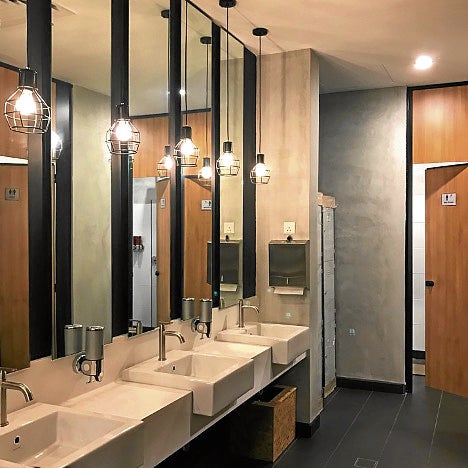 The multi-gender or all-gender locker room and bathroom of the Union
Strength Gym in Kuala Lumpur have shared wash facilities and segregated
changing and shower cubicles.

It is August 2019, and transgender woman Gretchen Diez is queueing for the ladies’ room at a mall when a cleaning lady calls her out and says that she should instead be queuing for the men’s room.

Surprised to be told so in a city that prides itself as being LGBTQ-friendly, Diez pulled out her phone camera to document the situation, intending to later bring it up to the mall management. An argument ensued. The irked and angered cleaning lady had Diez arrested by the mall security who kept her detained while they waited for the arrival of the police. They took her to the station for further questioning and eventually set her free after a nine-hour or so, ordeal.

Diez’s video triggered public outcry and sympathy. She was treated like a criminal, handcuffed and detained, when all she wanted to do was use the ladies’ restroom.

The cleaning lady had apologized to Diez for her grossly misplaced sense of duty, but the incident has left the LGBTQ population feeling maligned, misunderstood and unsafe. Diez was “misgendered.” While many cities and provinces both here and outside the country, have passed ordinances that protect LGBTQ rights, the public restroom continues to be a controversial subject.

This highly deliberated space poses many questions over comfort and health. While our visits to restrooms are quick, they can be unpleasant as personal spaces come close, and as our personal bubbles overlap with those of total strangers. It is one of those spaces we can’t stand being in, but also one we can’t live without. You just want to come and go as swiftly as possible.

And it comes with safety concerns: bullying, theft, sexual abuse and other acts that can transpire just as quickly and momentarily as one’s transient comfort room business. 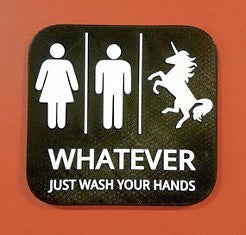 All-gender restroom’s signage cites
“expression” and “identity,” and another, more humorous one, takes on the unicorn as a symbol for the nearing
fifty or even more, gender identities.

For some, the idea of a transgender woman—a once-upon-a-time-man—sharing space with their naturally female-born selves or young daughters is questionable. But the transgender woman looks upon herself as being female and belonging to that restroom.

Her sexual orientation and identity are completely and indisputably female—no less female than your daughter or mother. A transgender woman may have been born male, parts and all, but in their minds, they feel and know that their body was wrongly created. It is the same for the transgender man.

In the United States (as we do not have enough data for the Philippines), research shows that violent sexual assaults involving adult transgenders happen not in these public restrooms, but in other extreme places like detention cells and jails.

In a report by Reuters in May 2019, surveys in the US found that for the middle school and high school age groups, trans and non-binary (gender identity or orientation beyond male or female) students experienced sexual assaults in the bathrooms and locker rooms of their own birth gender.

“When schools required students to use bathrooms and locker rooms based on their sex assigned at birth, transgender boys—who identify as male but are labeled female on their birth certificates—were 26 percent more likely to experience sexual assault.” Anecdotally, you hear of that behavior in the Philippines as well, where the threat is aimed at the transgender person by a “straight” person and not the other way around. For most school-age transgenders, going into either restroom exposes them to the risk of questioning, ridicule and bullying. 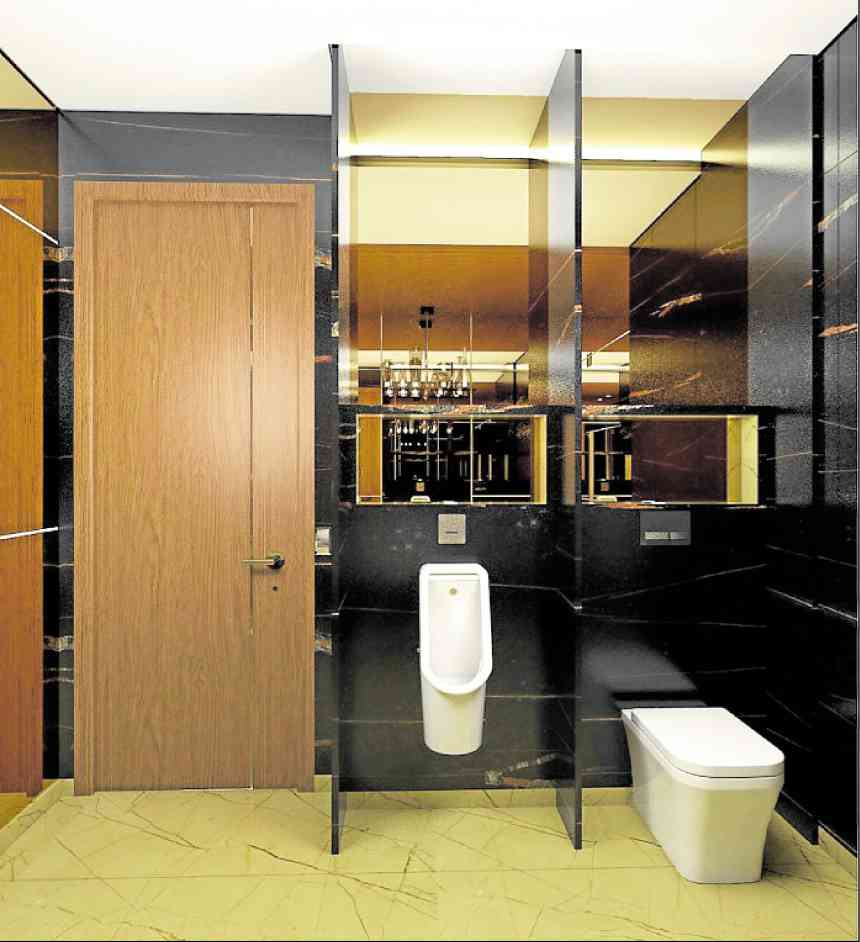 Residential powder rooms and the current restaurant toilets are essentially shared, multi-gender facilities, albeit single-user. The lack of urinals in many all-gender restrooms has been a subject of debate in other countries that chose to do away with them for lack of flexibility.

Thankfully, many public spaces now provide LGBTQ restrooms, designated also as the PWD or Person With Disability restrooms. It is mandated by law and is the quickest solution for buildings with the existing standards of a male, female and PWD combination of restrooms.

But on the long-term, is this truly the solution? Isn’t segregating a restroom for this growing LGBTQ population, still struggling for society’s full acceptance, further emphasizing the separateness of their genders, and wedging the divide?

It is not the ultimate solution, but perhaps this shared PWD-LGBTQ restroom is a transition towards a more inclusive design of public restrooms. It recognizes the LGBTQ community’s need for security and acceptance and recognizes their community as being part of our whole.

In Argentina and other places in Latin America, school age children can choose to use the restrooms of the gender they identify with. In Denmark and Sweden, majority of public restrooms are already multi-gender. 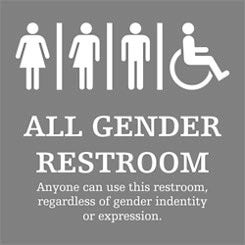 In the US, the Department of Education released guidelines for the creation of “multi-gender,” “gender-inclusive,” “ungendered” or “all-gender” restrooms and locker rooms for schools. Locally, we have restaurants with “single-loader” or single-person, multi-gender, restrooms as required by law.

Two years ago, we renovated a school and designated the PWD toilets as LGBTQ toilets as well. Amusingly, transgenders went into the restrooms where they associated their gender, and because the school is LGBTQ-friendly, there was no issue on cross-dressing nor on restroom-crossing.

A few months earlier, we designed an all-gender locker room and bathroom for a gym in Kuala Lumpur. Here, the wash areas are common, and some changing, toilet and shower cubicles were also common, save for a few that were designated exclusively male or female, with the transgenders using the cubicle of their gender choice. The arrangement has worked out very well.

Of course, cultural norms and religion still influence the acceptance of this all-inclusive set-up, but as certainly as the workings of society evolves, so will its spaces. In a few years, women like Diez may not ever have to choose their queue. By then, there will be only one.