The anatomy of an expedition ship

It’s another week of wanderlusting through this pandemic via old photos. Whatever else is there to do when we are restricted from our getaways?

Flipping through my library of travel photos, I find it incredible how people live so differently in various parts of the world. While there is a commonality to our spaces, there is also a huge diversity in the kind of experiences each can deliver.

One such experience I’ve had was traveling through the South Atlantic Ocean on an expedition ship for 18 days. While there are hotels and there are cruise ships, an expedition ship puts those two together and adds an extra element: the adventure-enabling facilities. We were onboard a ship that would take us to some of the most remote places in the planet: the Falkland Islands, South Georgia Islands, the South Shetland Islands of the Antarctic Peninsula and the Antarctic Continent itself. It was an adventure that began at the port of Uruguay’s capital city of Montevideo, where we boarded the MS Fram, a Norwegian Expedition ship built and run by the Norwegian shipping line Hurtigruten, a company well known for its polar itineraries.

Unlike your regular cruise ship, our ship was built to navigate through the icy regions, a marine vessel structurally designed as an “icebreaker.” Its hull is able to plough through ice sheets two feet thick. State-of-the-art equipment like depth sounding sonars, charting and navigation tools, tracking systems, iceberg search lights and a power system running largely on sustainable energy and self-sufficiency support the safe and efficient functioning of what was to be—for lack of hotels in the polar regions—our official “base camp.” 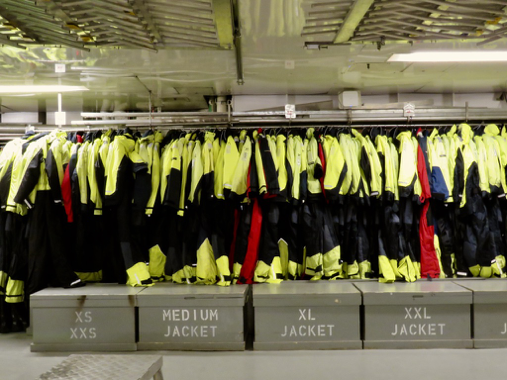 The walls of the “tender pit” are lined with an incredible amount of excursion gear, rows and rows of bright yellow protective coveralls and racks for neoprene boots, gloves and inflatable life vests. 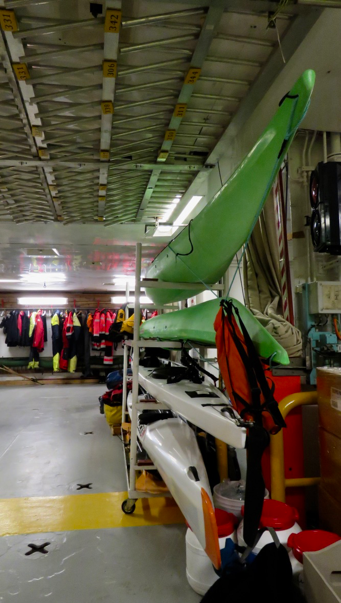 At least 12 kayaks are housed in this backroom for explorations.

This expedition ship isn’t huge. In fact, it only has 127 double cabins and a handful of suites—a small number compared to a typical cruise ship. Its rooms are unpretentious, yet very well appointed, and provide just the right amount of space for your adventure gear.

The boat’s uppermost deck houses a lounge, lined at its outer perimeter with sofas and full-height windows that faced out to sea, with 180-degree views of the gorgeous landscape outside. Binoculars and a library with books about the Polar Regions and the world’s adventurers added to the explorer experience. This area also has a beverage bar for those days when the sway of the ship became a little too dizzying, and a drink was helpful in muddling the state of one’s equilibrium. At the other end of this deck, a well-equipped fitness room, a sauna and two outdoor hot tubs put the fitness and wellness spin into the experience, because you do have to prep for the trekking and kayaking.

Its mid-level Deck 5, and towards the rear or aft of the ship, is the large dining room that served the meals of the day. And on the front side of this deck is a hall with a classroom-type seating extended into a small café at the rear. This was the site of many briefings and learning sessions during days at sea. And there was yet another enclosed hall for more classroom-type learning sessions.

After all, the ship had a full team of marine biologists, ornithologists, nature guides and kayaking experts that led all the expeditions in the water, on land and on snow or ice. The spacious outside decks wrapped around the ship and were a great place to observe and photograph landscapes, sea birds and other marine wildlife. 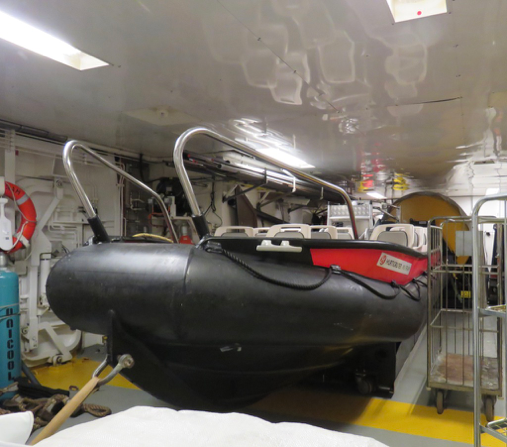 These “zodiac” boats ferry people in and out for shore landings. 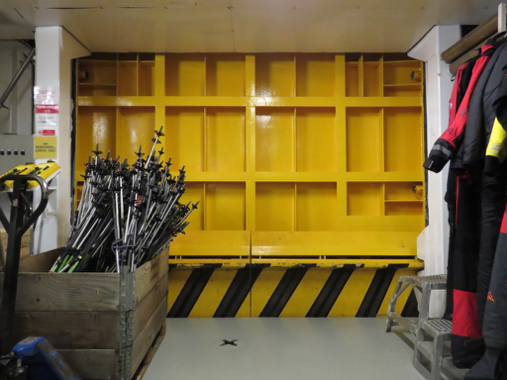 While other ships will have a hatch like this for cargo, this expedition ship has one for launching its exploration boats. To the left are walking sticks for snow trekking.

Its upper levels are devoted to the guest suites, with the lowermost ones, like most other ships, allotted to machine rooms, engineering services and back of the house facilities. Its Deck Two though, was the great enabler of the expedition experience. The “tender-pit” is a full “expedition tool-deck” so large, its area can park the equivalent of up to 25 land vehicles. This dry-dock parking is dedicated to the storage and maintenance of inflatable zodiac boats and hard-hulled speedboats used for all the water-based activities and all landings to shore.

Here, too, is where they keep and clean kayaks for the on-water explorations. The walls are lined with an incredible amount of excursion gear, rows and rows of bright yellow protective coveralls, and racks for neoprene boots, gloves and inflatable life vests. This is the deck that equipped everyone with his or her adventure gear.

The boat’s name, “Fram” means “forward,” and memories of those unforgettable experiences in some of the earth’s remotest places, coming so close to nature and wildlife could only be possible with a ship of its kind. For now, the onward and forward in travel will have to wait, and instead, sit with us as we all attempt to move ahead in our current situation.