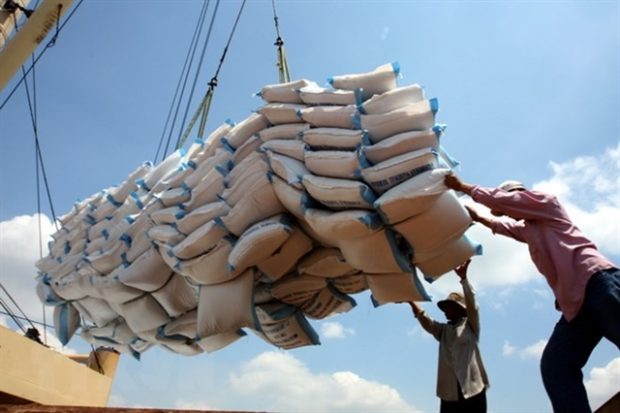 Vietnamese rice being loaded for export. High demand for food set the stage for Việt Nam to take the lead in global rice this year. Viet Nam News/Asia News Network

HANOI — Vietnam may take a global lead in rice exports for the year 2020, said Minister of Industry and Trade Trần Tuấn Anh in a report to the National Assembly on Monday.

Speaking to the NA, the minister said as countries were trying to raise food stockpiles due to the COVID-19 pandemic, demand for Vietnamese rice has been on the rise, pushing the country’s rice exports in the first two months of the year to increase by 31.7 percent from the same period last year.

Adverse effects caused by climate change, such as droughts and salinization raised concerns over the country’s ability to maintain its level of rice export. As a response, the Government ordered a halt to rice exports until May so that further studies can be done on Vietnam’s rice production and stockpile.

After studies revealed large rice stocks in the Mekong Delta and reviews done on the country’s obligations with trade partners, governmental ministries and agencies have asked for the Prime Minister’s approval to continue Vietnam’s rice export activities.

Anh said the country maintained an export quota of 400,000 tonnes of rice in April and is set to resume its normal export level for May as global demand for rice remained high while making sure there is ample supply for the domestic market.

During the first five months of the year, Vietnam exported over three million tonnes of rice, an increase of 11.8 percent from the same period last year, reaching US$1.48 billion in value, a 25.44 percent year on year increase.

Việt Nam considered renewable energy, and solar energy in particular, an important source of power, especially for the 2024-25 period in which the country is forecast to face a severe shortage, according to Anh.

It called for adjustments made to the country’s power production planning including new policies and incentives to encourage investments in solar and wind energy.

To date, the country has put into operation 90 solar energy projects with over 5,000MW in output. The government has also shown its support with the approval of a plan to add over 11,000MW of renewable energy in the future.

Over VNĐ37.5 trillion, or US$1.6 billion, in funding was earmarked for key infrastructure projects across the country in 2020, according to Minister of Transport Nguyễn Văn Thể.

By the end of May, VNĐ12 trillion has been disbursed, an increase of more than 10 per cent from the same period last year, and reached 30.8 percent of this year’s target amount, said the minister in a report to the NA.

On the national North-South Highway project, the ministry said it has allocated nearly VNĐ17 trillion to the project. Of which, VNĐ2.7 trillion was set for the project’s East sections.

Over VNĐ17 trillion was also set for the Long Thành International Airport. In a recent meeting with southern Đồng Nai Province – the airport’s location – the local authority has pledged to finish site clearance by the end of 2020 at the latest to provide the project with more than 1,810 hectares of land.

According to the minister, improving infrastructure networks remained a top priority for the country, especially for the Mekong Delta.

The ministry said it has been working closely with local governments in HCM City, Cần Thơ, Cà Mau and Kiên Giang on the development of a number of key projects including HCM City’s Belt Road 3 and 4 as well as inter-province roads connecting the Mekong Delta’s economic hub with other provinces in the region.

In the central and Central Highlands regions, the transport ministry, in cooperation with the Ministry of Planning and Investment, is working on a plan to add an additional 700km of road on top of the existing 654km to form a connection between Hà Nội and HCM City in the form of a highway that spans over 1,700km in length. Other routes that were due for an upgrade in the highlands include national routes 19, 24 and 25.

The Hà Nội region will also see the construction of Belt Road 4 and 5, connecting the capital city to surrounding northern provinces. A number of highways including the Hà Nội-Hữu Hghị-Chi Lăng, Vân Đồn-Móng Cái and Đồng Đăng-Trà Lĩnh, Hòa Bình-Mộc Châu and Lai Châu-Lào Cai have been set as priorities.