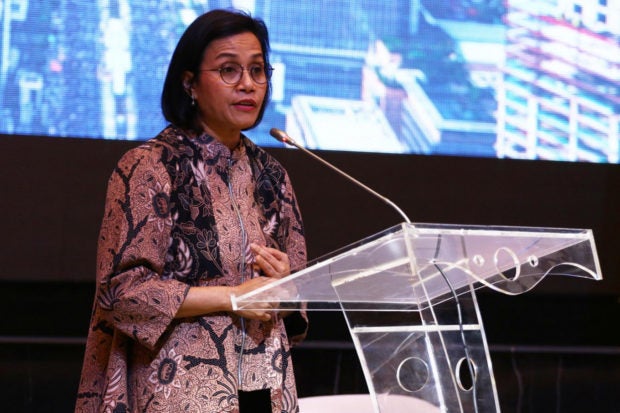 Finance Minister Sri Mulyani Indrawati said Tuesday the government was only requiring internet companies to pay VAT on sales of digital products and services starting July 1, adding that the companies would only have to act as “tax collector” as consumers would have to pay for the taxes. Antara/Rivan Awal Lingga via The Jakarta Post/Asia News Network

JAKARTA — The Indonesian government will press ahead with collecting digital tax despite a recent announcement by the United States Trade Representatives (USTR) to investigate such a policy, which the US said was aimed squarely at its technology giants.

Finance Minister Sri Mulyani Indrawati said Tuesday the government was only requiring internet companies to pay value-added tax (VAT) on sales of digital products and services starting July 1, adding that the companies would only have to act as “tax collector” as consumers would have to pay for the taxes.

“Indonesia can collect the VAT because there is no dispute about this,” Sri Mulyani told reporters in a livestreamed news conference. “The USTR is only investigating the income tax policy as we have yet to settle on how to charge the companies income tax.”

The government has been struggling to collect more revenues to fund its cash-strapped budget as the COVID-19 pandemic hits almost all business sectors. Ministry data show that state revenue reached Rp 664.3 trillion (US$47.41 billion) as of May, down 9 percent year-on-year (yoy), as tax income dropped 10.8 percent yoy to Rp 444.6 trillion.

Law No. 2/2020 stipulates that the government is able to charge VAT on taxable intangible goods and/or services sold through e-commerce platforms and charge income tax or electronic transaction tax on e-commerce operated by foreign individuals or digital companies that have a significant economic presence.

The significant economic presence will be determined through the companies’ gross circulated product, sales and/or active users in Indonesia.

The new Finance Ministerial Regulation No. 48/2020 states that the tax authority will impose 10 percent VAT on digital products, including streaming services and digital games, sold by non-resident internet companies with a “significant economic presence” in Indonesia starting July 1.

The finance minister previously said services provided by streaming platforms such as Spotify and Netflix, as well as video conference platform Zoom, would be among those subject to the tax.

“We were previously unable to charge the VAT even though many people have turned to digital services during the coronavirus pandemic,” she said on Tuesday. “We are doing this to maintain our tax base.”

The US Trade Representative office is now looking into taxes in Britain and the European Union, as well as Indonesia, Turkey and India following a similar trade investigation into France last year.

Washington opposes the efforts to tax revenues from online sales and advertising, saying they single out US tech giants like Google, Apple, Facebook, Amazon and Netflix.

The Organization for Economic Cooperation and Development (OECD) member countries are negotiating the first major rewriting of income tax rules to take better account of the rise of big tech companies such as Amazon, Facebook, Netflix and Google that often book profit in low-tax countries.

The OECD/G20 Inclusive Framework on BEPS (base erosion and profit shifting) has yet to reach a consensus on how to tax digital companies. In the meantime, it allows its members to pursue their own initiatives before a global consensus is reached, but the initiatives should be revoked by the members if they contradict the measures agreed to later by the framework.

“I think retaliation from the US is very likely to happen, it is just a matter of how the Indonesian government wants to do a cost-benefit calculation when the digital tax is in place.”

A researcher at the Institute for Development of Economics and Finance (INDEF), Nailul Huda, projected that Indonesia could earn up to Rp 7.2 trillion by requiring internet firms to pay taxes, but warned that it might find difficulties as other countries look to do the same.