The holidays are not over … at least not for balikbayan who are making the most out of their visit to the Philippines.

I always get the question from visiting relatives: “If I had a chance to only eat at one Filipino restaurant, Margaux, where should I go?”

Thankfully, there are a lot of restaurants today that serve fantastic Filipino comfort or “home-cooked” food that the balikbayan and/or tourist will not run out of choices.

There are also some new restaurants/chefs worth mentioning who have ventured into recreating Filipino dishes, adding their own modern or even post-modern flair (see last week’s column) but at the end of the day, admit it, we desire the comforts and flavors of home, don’t we?

That is why my personal favorite is still Aristocrat. This restaurant, with its chicken barbecue and many other items on the menu—still does it for me every time. For guests who might need a bit more ambiance, my top of mind is still Abe in Serendra, for earnest, straightforward Pampangeño cooking that Tagalogs love.

But there are a lot of new-generation Filipino restaurants that are worth visiting, such as Manam, which has become my own mother’s favorite; Sarsa, a millennial favorite; and Romulo Cafe for its chic ambiance.

Here’s a list of leading Filipino comfort food restos in the metro today.

1. For a classic Filipino menu in an elegant cafe setting:

•Via Mare It was one of the first restaurants to serve Filipino food in an upscale setting and it is still a great source of Filipino comfort food today. It has become an institution and its founder Glenda Barretto is a culinary icon.

She was first to create an elegant version of the balut, calling it Balut Surprise, camouflaging the duck egg in a pastry crust and white wine sauce.

•Romulo Café Named after diplomat Carlos P. Romulo, this Filipino restaurant that started in Quezon City feels like a classy yet cozy home. Dishes served are heirloom or from family recipes, such as their Lola Virginia’s chicken relleno, which Lola Virginia learned to cook while playing the role of ambassador’s wife. The restaurant has expanded to Makati, Quezon, Alabang and, in true diplomat fashion, internationally as well, to London.

•Crisostomo The restaurant was named after the lead character in national hero Jose Rizal’s Noli Me Tangere. This is a beautiful place to appreciate Filipino food interpreted by chef Florabel Co. Among the hits are laing with lechon kawali, Paella Filipino, Sisig Linares, Salome’s Secret (inihaw na pusit) and crab fat rice. For dessert, try their ginataan bilo-bilo and campeaon turon.

•Mesa It is known for Crispchon, or their rendition of suckling pig, served two ways: wrapped in a malunggay crepe or tossed in chili garlic. Seafood lovers appreciate their baby squid in olive oil and crispy boneless tilapia. Also highly recommended is the Duck Basil Fried Rice, which has duck flakes and chili.

•Sentro 1771 This restaurant became known for their corned beef sinigang, a version of sinigang using a thick slab of home-cured corned beef. Sentro also honors familiar recipes by infusing them with a cosmopolitan dimension.

2. For a taste of Filipino-style chicken:

•Aristocrat The Aristocrat Restaurant, with its original branch on Roxas Boulevard, is known as the Home of the Best Barbecue in town. Their boneless chicken barbecue with its savory marinade matched with java rice and atsara (pickled papaya) is the best. They have also expanded their menu to include all the food a self-respecting Filipino foodie would love, including bulalo, hototay, crispy pata and dinuguan. Best of all, their Roxas Boulevard and Jupiter branches are open 24 hours if you want that one last authentic Filipino meal before heading to the airport.

•JT’s Manukan This restaurant serves Ilonggo food, specifically its famous chicken inasal, a specialty of Bacolod City in the Visayan province of Negros Occidental. They also have other excellent grilled skewers of chicken liver and other parts. Make sure to order the chicken liver. The use of charcoal for grilling and the slow, continuous cooking that liquefies the fat makes for an excellent culinary experience, in spite of the restaurant’s very rugged ambiance.

•Max’s This has become a food chain but its Filipino food offerings must not be discounted. Max is known as The House that Fried Chicken Built, its signature dish being a fried chicken with a recipe that remains a mystery to this day. It started when the American occupation troops stationed in Quezon City started eating at the home of Maximo Gimenez, who would serve this fried chicken, prompting him to open a restaurant. As the restaurant expanded, so did its menu. It now offers other Filipino favorites such as nilagang baka, crispy pata, sinigang and lechon kawali.

3. Filipino restaurants by a new generation of advocates of Filipino cuisine:

•Manam They tag themselves as the Home of the Best Sisig in Manila, but there is more to this restaurant than just sisig. Manam presents Filipino 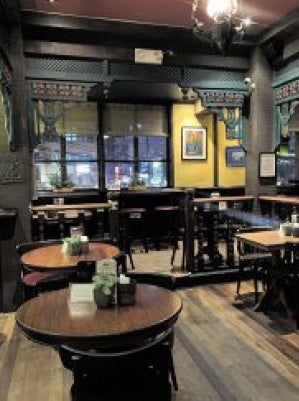 food with a little twist. They are also popular for their Beef Short Rib Sinigang and crispy pancit palabok.

•Sarsa Kitchen+Bar This restaurant by celebrity chef JP Anglo specializes in Negrense (from the province of Negros Occidental) dishes. But chef Jayps, as he calls himself, adds a contemporary touch to the restaurant’s offerings while remaining true to homegrown flavors. This is where you can try kansi, the Negrense version of bulalo.

•Cafe Adriatico Although this is actually a boomer’s restaurant (pardon my French, boomers), this cafe is still highly relatable to the Gen X and even the millennials, with its European cafe ambiance. Cafe Adriatico first became known as a hang out for artists back when Malate was a hip, happening place. It was—actually still is—known for its tsokolate (hot chocolate). Today, its menu includes wonderful expressions of traditional Filipino flavors. Make sure to try Lola Ising’s Adobo, an indulgent interpretation of the classic chicken and pork stew using pork belly.

I may have missed a restaurant or two. There are so many nowadays. Do remind me at @margauxsalcedo on Instagram. Happy eating!