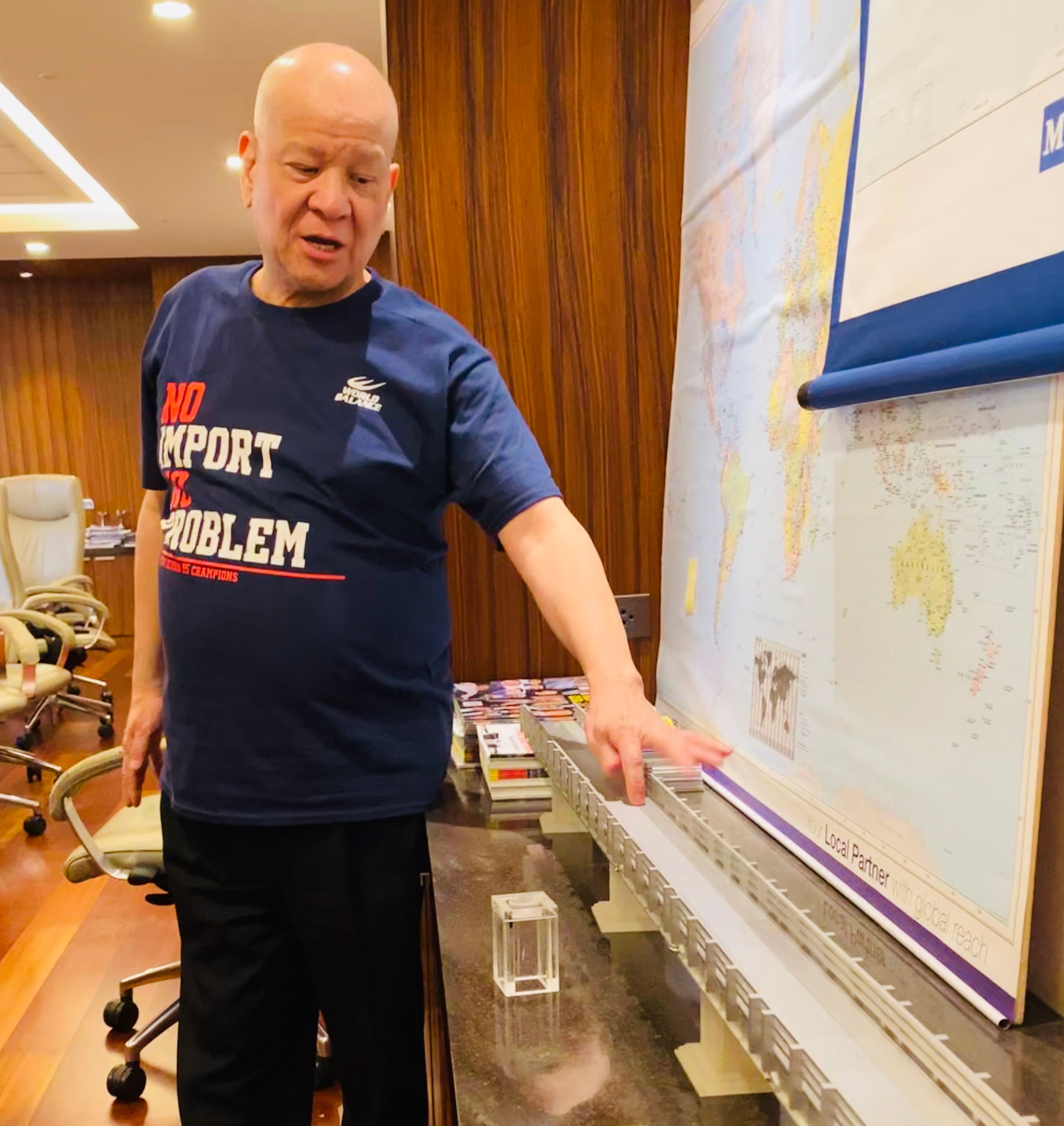 Back at his office, Ang demonstrates the rapid assembly of a modular elevated toll road, which he plans to propose to ease vehicular traffic along Edsa.‍

The cabin of the aircraft is almost totally dark, save for an overhead reading lamp illuminating a notebook, with a to-do list scribbled on the open page, and the glow of a mobile phone screen lighting the face of a figure wearing a hoodie.

It’s six hours into the 14.5-hour flight from Manila to Teterboro, New Jersey, on a Sunday, and everyone on the Gulfstream G650ER private jet—one of only two in the Philippines—is trying to catch some sleep. But Ramon Ang is busy at work.

In between writing down new business ideas and reminders about ongoing deals in his notes, he sends mobile phone messages bearing instructions to his staffers and associates. Never mind that the plane is zipping along at Mach 0.92 at 49,000 feet over the North Pacific Ocean. It has in-flight Wi-Fi that connects passengers to the outside world via satellite.

“A lot of opportunities will present themselves in 2020, so we have to make sure we’re ready to move and take advantage of them,” the president of San Miguel Corp. says to his corporate affairs chief who, seeing that the boss was up working, decides to postpone a nap and joins him at the conference table.“This airport is an important project,” Ang says, referring to his proposed $15-billion international airport in Bulacan, north of Metro Manila, aimed at easing congestion at the woefully inadequate Ninoy Aquino International Airport. “The Philippines needs this if its economy is to grow.”

This audacious project will be the most valuable infrastructure deal in the country’s history, whether by the government or the private sector. And it is one of the reasons that the tycoon is flying to the United States. He is attending a testimonial dinner in New York hosted by the international business news organization Bloomberg, which recognized him and VIPs from around the world as one the most positively influential and newsworthy personalities of the year. 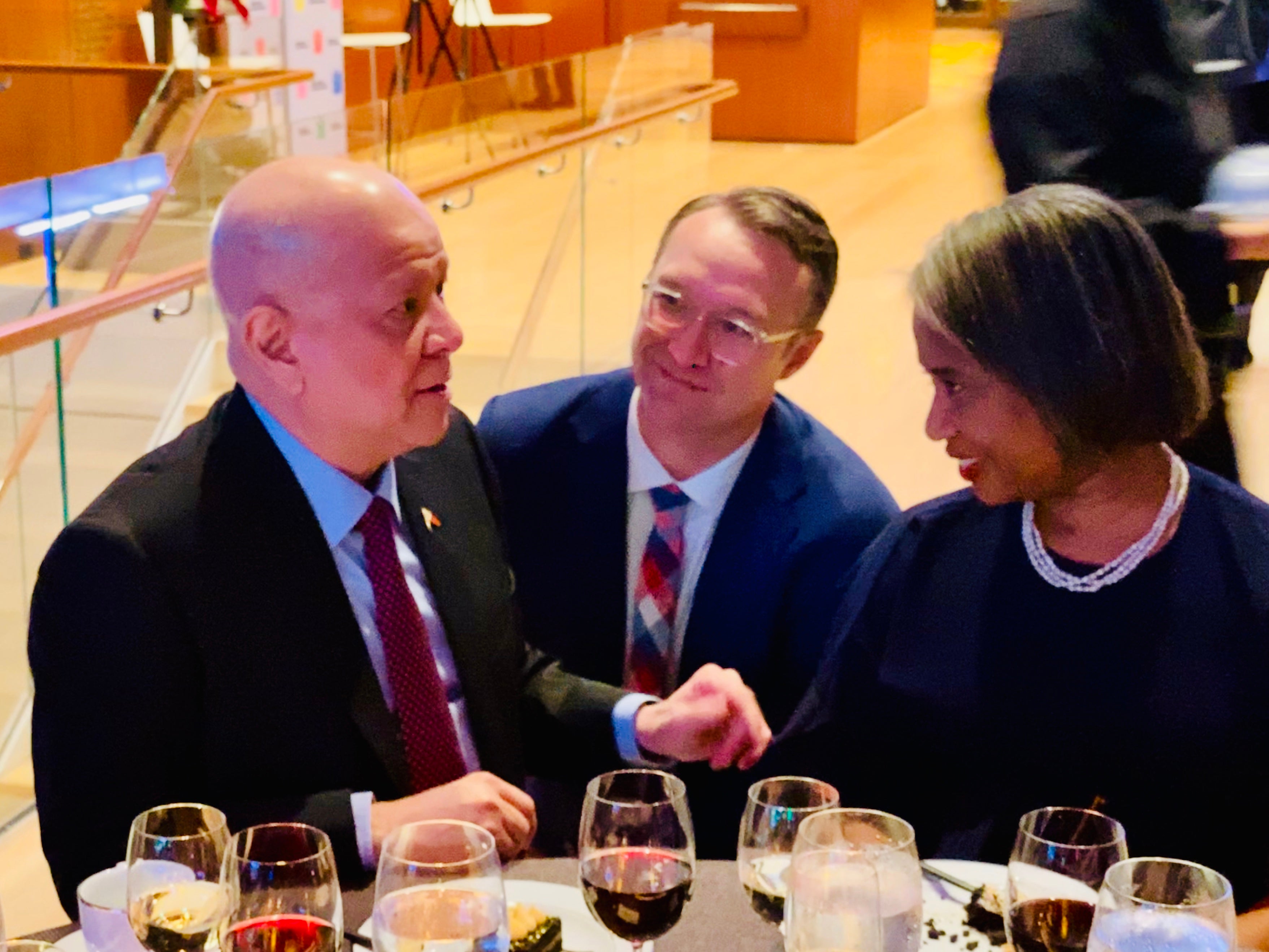 The Bloomberg article about him reads: “Ten years ago, San Miguel was primarily a food and beer conglomerate. (It’s named after its original 1890 brewery, opened when the Philippines was still a Spanish colony.) Ramon Ang, who’s run the company since 2002, has expanded into the electricity, oil and construction industries. San Miguel still makes plenty of beer, but the $2.15-billion purchase for 86 percent of Holcim likely allows it to capitalize on President Rodrigo Duterte’s pledge to spend $170 billion on infrastructure. San Miguel is building a light-rail system and will soon break ground on the airport in Bulacan province, not far from the capital. It will have three times the capacity of Manila’s current one, which is 71 years old and regularly ranks among the world’s worst.” The airport project has encountered months of delays at the hands of the government, with various regulators and officials ordering seemingly interminable reviews and studies about its feasibility. No sooner is one hurdle cleared than another is set up across the conglomerate’s path.

“That’s nothing,” Ang says with his trademark bravado. “We’ll get this project through. Why shouldn’t it be approved? We are spending for everything, from acquiring the property, to financing the project. Not a single peso will come from the government.”

After a brief pause, he adds: “And honestly, if the government doesn’t want us to build this, we won’t build it. We don’t need it. San Miguel can do without the additional risk.” And with just a slight hint of exasperation, he continues: “This will not make us a lot of money, you know? This is a legacy project. We’re doing this because the country needs it.”

His fixation on the massive airport project, however, doesn’t mean that the conglomerate is slowing down on its other deals. Quite the contrary, Ang says it’s full speed ahead in the other aspects of the business.The Skyway Stage 3 elevated connector toll road will by completed by mid-2020, three months after the original target date, no thanks to the discovery by engineers of underground pipes and utility facilities that will require adjustments in the alignment of the road.

Plus San Miguel will be acquiring the sprawling Pandacan, Manila, property of Pilipinas Shell, which is adjacent to its own Petron property to create a multimodal transportation hub that will, hopefully, make daily commute by the capital city’s millions of employees easier. 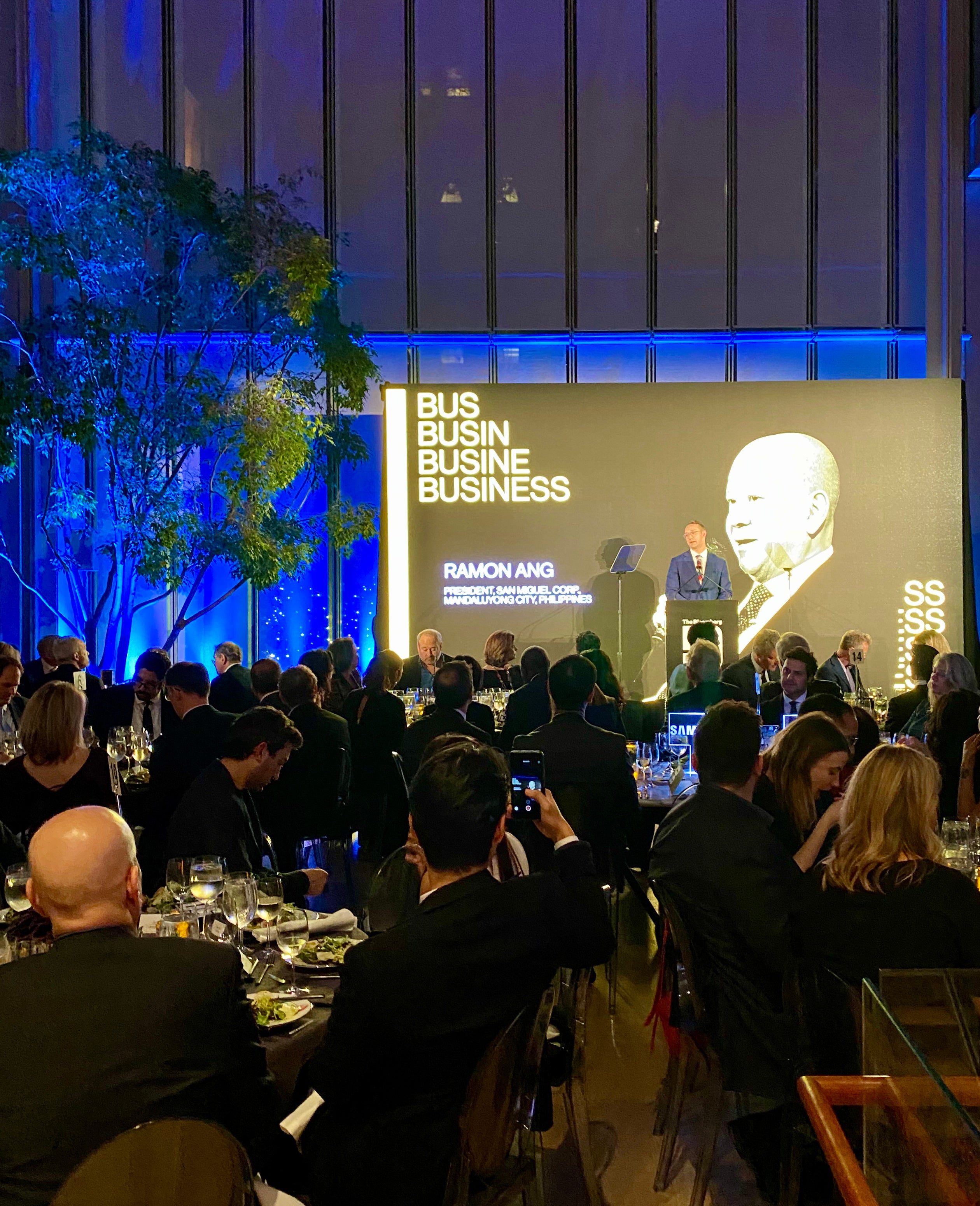 In his speech, Weber cited Ang’s contributions to the Philippine economy, most notably the upcoming $15-billion Bulacan airport—the single biggest infrastructure project in the country’s history by a public or private entity.‍

“For 2020, we are focusing on implementing traffic solutions, whether its vehicular traffic on the ground or air traffic in the skies,” Ang says, when asked about his plans for the year.As for San Miguel’s other business lines, the conglomerate is now entering the final year of its three-year, $15-billion expansion program. “So this year, we will invest another $5 billion,” he adds.

But the conversation quickly returns to the mega airport project: a topic that excites him as an avowed aviation enthusiast. “We’ve already cleared all their reviews,” he says in a lower tone. “We’re breaking ground soon.” Soon, it’s time to land in New Jersey, take the 30-minute car ride to Manhattan, rest at the hotel, attend the testimonial dinner while hobnobbing with The Big Apple’s glitterati. And after a day and a half on the ground in rainy and chilly New York, Ang’s red-and-white Gulfstream jet is “wheels up” from Teterboro Airport.

As the aircraft reaches cruising altitude, he glances at his watch. It’s Wednesday morning back in Asia. The blinds are lowered, the cabin goes dark, and the flight engineer—who also doubles as a steward—serves a light meal of spam, corned beef sandwiches and sliced fruits.

Almost immediately, he’s on his phone, texting instructions to his staff already on the ground at this next stop: a business meeting with suppliers in Taipei. Then the San Miguel chief whips out his notebook and starts scribbling a list of priority projects for 2020.

He glances up at his corporate affairs chief: “It’s going