Duterte picks on DMCI for speaking vs water contract 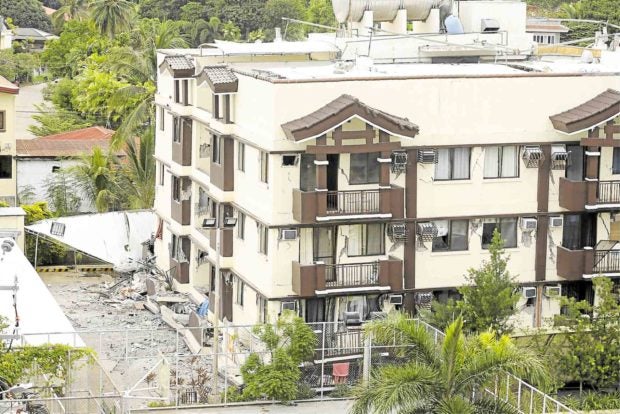 Unit owners at Ecoland 4000 Residences in Davao have been issued notices to vacate as the city government declares the building unfit for occupancy due to extensive damage from the Oct. 31 earthquake. KARLOS MANLUPIG

DAVAO CITY—President Rodrigo Duterte lashed out at DMCI Holdings for the collapse of its condominium building in Davao City more than two months after it happened at the height of the 6.5 magnitude quake.

The President, who spoke for the first time on the October 31 collapse of Ecoland 4000 building here, was venting his ire after a top DMCI official spoke about the water contract between the government and Maynilad Water Services, in which DMCI is one of its shareholders.

Duterte also threatened to suspend the permit of DMCI, one of the country’s top construction companies and a leading property developer.

“Ang me problema sa Pilipinas, mayayaman (Those having problems in the Philippines are the rich),” the President said.

“The Consunjis, one of their four condos collapsed. Nagsalita sa concession sa water, ikaw me problema, Consunji, builder ka, if naasar ako sa iyo. (He spoke about the water concession issue. You are the one who’s having problem, Consunji, you’re a builder, if I’m mad at you) I will not grant you any permit,” he said during the turnover of financial aid to farmers in Pigcauayan town, Cotabato province Friday evening.

“That beautiful condominium in Ecoland,” he said, referring to Ecoland 4000 condominium. “Outside, it looks so good with all the lights but when the earthquake struck, people were running because of the cracks. In the Philippines, only the rich who have no shame will be in trouble.”

Isidro A. Consunji, chair of DMCI Holdings Inc., was earlier quoted in a news report saying that it was the government, and not the private firms, who drafted the terms of the contract that the President found “onerous.”

The businessman was also quoted to have said that the government’s recent moves on the issue create “uncertainty” which would have a negative impact on investors.