Dizon: About half of 75 projects in current lineup may not be feasible
By: Ben O. de Vera - Reporter / @bendeveraINQ
Philippine Daily Inquirer / 03:31 AM October 16, 2019

Midway through the Duterte administration’s term, its economic and infrastructure teams have started reviewing the ambitious “Build, Build, Build” program to possibly include emerging big-ticket projects being pitched by the private sector—although cautious not to repeat mistakes in the past that were deemed too accommodating to firms’ profits at the expense of taxpayers’ money.

“Build, Build, Build”—launched in 2017—is aimed at ushering in the “golden age of infrastructure” in the country after years of neglect.

This program of President Duterte involves a number of select and highly strategic infrastructure projects as well as thousands of similar projects and logistics improvements all over the country that will raise productivity dramatically, said Finance Secretary Carlos G. Dominguez in a speech last week.

“These include construction of high-capacity commuter service railways, a subway, flood control and management facilities, roads and highways, airports, and new cities,” he said.

“We expect to bring this up further to 7 percent by 2022,” added Dominguez, who heads the administration’s economic team.

The infrastructure program, with the New Clark City as the centerpiece thus far, likewise opened many investment opportunities, he said.

“The New Clark City has attracted new industries and promises to be the center of modern enterprise for the region. Later this year, we will be hosting the Southeast Asian Games in this city. This area is supported by the new and world-class Clark International Airport as well as the Subic Bay Seaport, which will be linked by a railway and expressway.”

Last month, the interagency Investment Coordination Committee (ICC) and Infrastructure Committee (InfraCom), shepherded by state planning agency National Economic and Development Authority (Neda), decided to undertake the review. They will be checking the viability of the current “Build, Build, Build” list, composed of 75 “game-changing” projects, to come up with a better pipeline with more projects that can be started and, hopefully, finished before Mr. Duterte ends his term in 2022.

According to the latest Neda status report on the progress of “Build, Build, Build” as of July, only 21 projects worth P187.6 billion out of the 75 flagship projects worth a total of at least P2.4 trillion will be finished in 2022.

“The remaining 54 projects will be completed beyond 2022, but may commence implementation during the current administration,” the Neda report read.

As of mid-2019, 46 “Build, Build, Build” projects worth P1.6 trillion were being implemented, although only nine were currently under construction.

Of the 46, two were completed, six were undergoing detailed engineering and design, 10 under procurement, 12 undergoing budgeting/financing, and seven up for reevaluation by the ICC.

Out of the 75 “Build, Build, Build” projects, 20 were under project development, five for review, and four were awaiting government approval.

The nine ongoing projects included the Clark International Airport Expansion, a public-private partnership (PPP) build-and-transfer project that was 63-percent complete as of April. 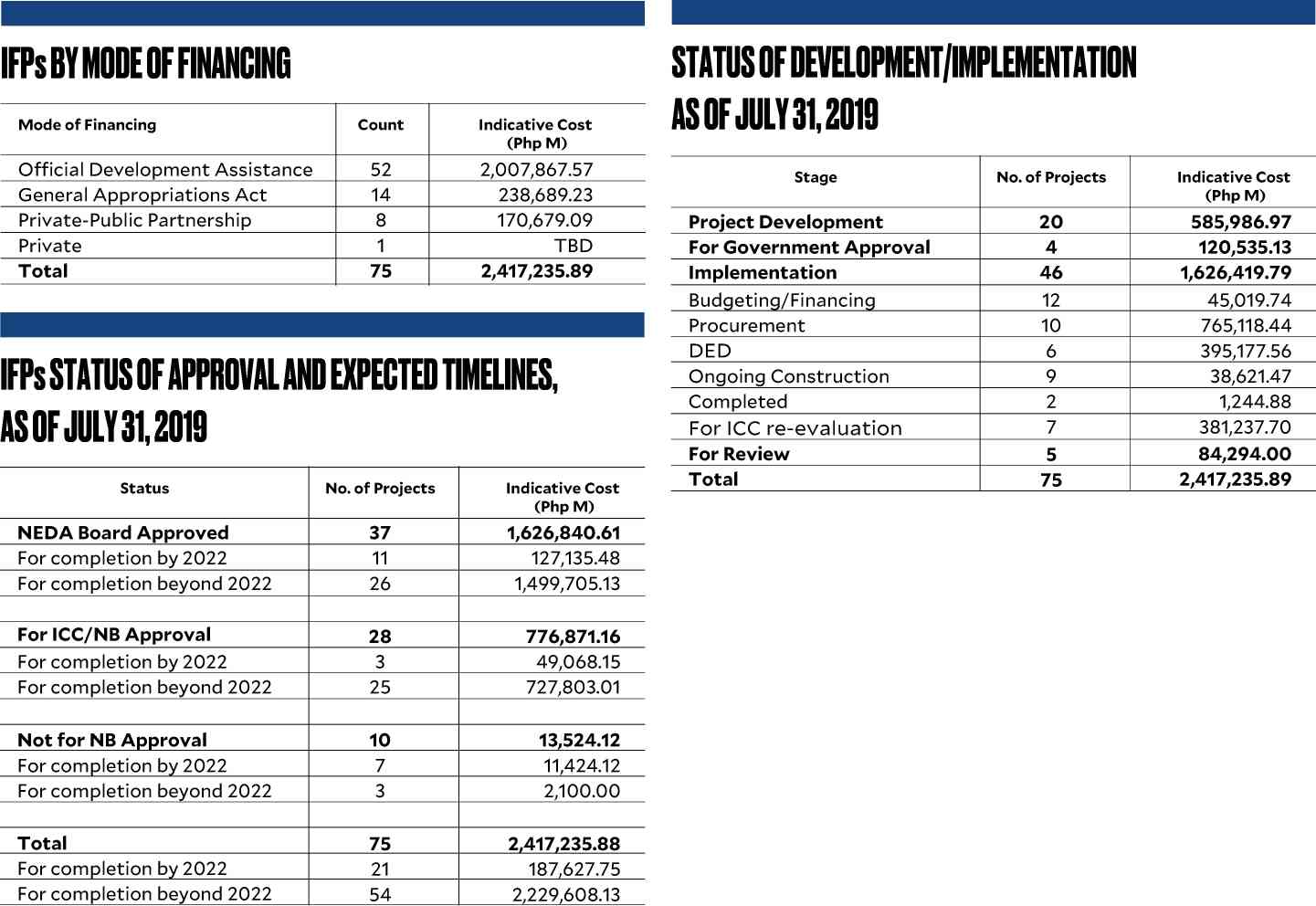 As for two government budget-funded projects, Bonifacio Global City to Ortigas Center Road Link Project phases 1, 2A and 2B was 33.79-percent completed; while Malitubog-Maridagao Irrigation Project phase 2 was 57.46-percent done.

To date, 37 “Build, Build, Build” projects worth P1.6 trillion had already been approved by the Neda Board chaired by the President, of which 11 (P127.1 billion worth) were for completion by 2022, and 26 (P1.5 trillion) will be finished beyond the Duterte administration.

In terms of financing, 52 projects worth a combined P2 trillion will be funded by official development assistance (ODA) loans and grants from development partners and multilateral lender; 14 (worth P238.7 billion) by the national budget); eight (P170.7 billion) through PPP, and one will be financed by the private sector.

In a recent chance interview, Bases Conversion and Development Authority president and chief executive Vivencio Dizon, who is also the presidential adviser for flagship programs, told the Inquirer that while they had yet to finalize it, the updated “Build, Build, Build” pipeline might even be expanded and would be more comprehensive.

Dizon said about half of the 75 projects included in the current “Build, Build, Build” list might not be feasible, as the program included infrastructure envisioned during the Ramos, Arroyo and Benigno Aquino III administrations.

However, Dizon pointed out that the Duterte administration was already piling up its own set of priority infrastructure projects.

“We’re not saying we’ll finish all of the projects. It takes some time to complete infrastructure, but we should start building them,” Dizon said.

He said emerging big-ticket projects to be rolled out by the private sector might be included in the “Build, Build, Build” pipeline.

He said the government was receiving numerous PPP proposals, but added that they were “looking at the risk.”

“There are projects perfect for PPP like airports, especially O&M. But there are others that the private sector will not bankroll because there would not be much returns,” he said.

The Duterte administration had shunned the PPP mode as its economic team found the process from project approval to implementation too slow. During the previous administration only 10 projects were rolled out despite an earlier plan to jump-start 10 each year.

To invite private sector participation in infrastructure development, Duterte’s economic managers pushed for “hybrid” PPP under which the government builds the projects, then bids out O&M to private firms.

It also encouraged pure PPP proposals to be pitched before local government units (LGUs) to support developments in provinces, cities/municipalities and barangays.

Also being reviewed by Neda ICC and implementing agencies were airport projects to be undertaken by Aboitiz Group in Bohol; by Dennis Uy-led Chelsea Logistics and Infrastructure Holdings Corp. in Davao, and other PPPs to to expand Mactan-Cebu, Laguindingan and Kalibo airports.

Pernia earlier called on infrastructure agencies to fast-track “Build, Build, Build” to help reverse the slower first-half economic growth brought about by government underspending on public goods and services as a result of the delayed 2019 budget approval.

“Construction activities under the government’s ‘Build, Build, Build’ program are expected to generate employment, which can bolster private spending,” the DBCC said.

Habito pointed to recent Commission on Audit (COA) reports showing that the Departments of Transportation and of Public Works and Highways had been having difficulty in spending their annual budgets. The DPWH spent only one-third of its allocated budget in 2017, while the DOTr spent only 26 percent in 2017 and 21 percent in 2018.

“There’s something wrong with the absorptive capacity of infrastructure agencies,” he said.

Habito said that “if you look at the entire landscape, the PPP performance has been good,” citing high-profile projects like the Mactan-Cebu International Airport.

“The fact that San Miguel has been given the go-signal to proceed with the Bulacan airport is telling us already that the government is open [to PPPs]. That’s not the pronouncement but the body language is telling us that there’s a move back toward PPP. Why? Because they have no choice. If DPWH and DOTr cannot deliver, nothing will happen with Build, Build, Build,” Habito told the Inquirer.

It would also help that local conglomerates and corporations were awash in cash, hence big war chests for infrastructure, Habito added. “Initially, that was the rationale for PPP—the government had no money. Sure, the government now has more money and it can also borrow from China but the question is implementation—capability is the problem.”

The Department of Finance (DOF) was taking a more cautious stance on PPPs even as it was also more welcoming of such projects than before.

The DOF pointed out that PPPs were more of a money-making venture for big corporations, and this mode of delivering infrastructure had been hounded by many issues.

“Automatic rate increases, non-compete clauses, commitments of non-interference, temporary restraining orders (TROs) and concessionaire-required government guarantees are just some of the issues that have constantly plagued PPP contracts in the past. Like infrastructure projects implemented through ODA, PPP projects have their own bottlenecks in implementation that also result in delays,” DOF Undersecretary Karen G. Singson said in a response to a Inquirer columnist Peter Wallace’s recent opinion piece titled “Revive PPP.”

“Take for example the Muntinlupa-Cavite Expressway (MCX) Project, which was highlighted as the first PPP project of the Aquino administration. The MCX project was announced in President Aquino’s State of the Nation Address in 2013, but approved by the Neda Board only in 2015. In fact, the MCX road project was already proposed in 2009 through a joint venture with Philippine National Construction Co. and National Development Corp. Altogether, it took the government six years, from 2009 to 2015, to build a road that is only four-kilometers long just to structure it as a PPP,” Singson said.

Also, Singson said the Duterte administration did not want any “unwarranted obligations” imposed on the government by such contracts.

“In our review of PPP concession agreements executed in the past, the government had agreed to the following provisions, which we view as detrimental to regulators, the government, and more importantly, to the Filipino people: automatic rate increases; commitments of non-interference; and non-compete clauses,” Singson said.

“Before we are put to task to expedite PPPs, allow us to ask whether ‘regulation by contract’ in these PPPs promote public interest. In our PPP experience, the government has been tied to provisions which strip the government of its regulatory authority and ability to require concessionaires to improve services rendered to consumers.”
“In addition, these contract terms have increased contingent liabilities of the government, currently estimated at P309 billion. The fund used by the government to pay concessionaires are sourced from taxpayers’ money. In support of nation building, the private sector must agree to risk transfer and absorb risks commensurate with the returns they are entitled to, by virtue of these exclusive contracts,” Singson added.

Singson urged private proponents to display willingness to accept terms imposed by the government to lessen the overall time frame for the evaluation and implementation of PPP projects.
“In a survey of Philippine PPPs, actual returns have significantly surpassed projected returns. On top of this, the private sector is allowed to engage in commercial activities surrounding the infrastructure project. We can no longer accept advice that the government must continue to provide guarantees for a significant portion of project risk, when the private sector makes more than adequate returns for taking on limited share of the risk,” she said.

According to the DBCC’s Fiscal Risks Statement 2020 report, the government currently has 17 PPP projects in its portfolio, with total project cost of P328.7 billion.

“For 2019 and 2020, about 19 national and local PPP projects are expected to be awarded. These include eight projects of government agencies and government-owned and/or -controlled corporations (GOCCs), and 11 projects of local implementing agencies. The [upcoming] PPP projects cover various sectors such as rail, ports, energy, water supply, solid waste management, health infrastructure, and vertical infrastructure,” the DBCC said.