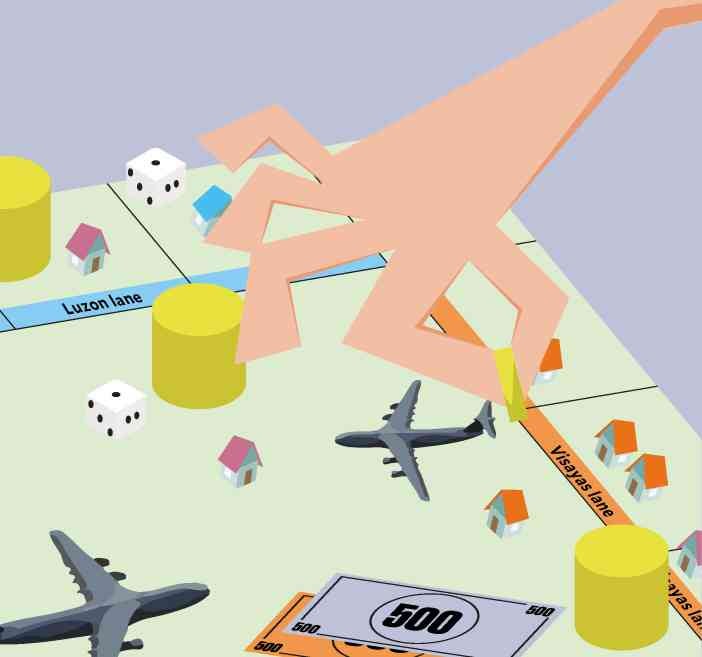 Private-run airports translate to better services? Businessmen, hoping to include airports in their growing empires,want to prove they can. —ILLUSTRATION BY MAXIMILLAN N. VILLANOS

A plan to privatize and upgrade provincial airports in the Visayas and Mindanao can take off by 2020 as the private sector and government finally come to terms over a host of unsolicited projects.

This will bring much-needed capacity upgrades at regional gateways, spurring tourism and trade. Properly run airports, after all, act as powerful enablers of economic growth.

From a 200-year-old conglomerate to businessmen with political ties, the Duterte administration’s openness to unsolicited offers has lured proposals for a host of provincial gateways.

Among these is Aboitiz Equity Ventures (AEV), a power, food, banking and property group that traces its roots to Spanish immigrants in the late 1800s.

Dennis A. Uy, a businessman from Davao and friend of President Duterte, is also eyeing airports as part of an aggressive push into infrastructure.

Uy had made bids for Davao international airport, the country’s third busiest gateway, as well as for Bacolod-Silay airport and the Busuanga airport.

Philippine Airport Ground Support Solutions Inc., controlled by businessman Jefferson Cheng, had made an offer for Siargao’s Sayak Airport while the group of Mega 7 Construction Corp., which had links to Energy Secretary Alfonso Cusi, had bid for Kalibo International Airport.

Save for Bohol airport, which opened barely a year ago, the new gateways were in need of expansion and upgrades.

In the case of Davao airport, passenger volume hit 4.3 million in 2018, or 43 percent above its design capacity of three million passengers per year, according to Chelsea Logistics and Infrastructure Holdings Corp., the Uy-led company proposing to expand and operate the gateway via a 30-year concession.

Chelsea Logistics said it would invest around P48 billion at no cost to the government.

Its proposal includes plans for a new parallel taxiway, reconfiguration and expansion of the passenger terminal apart from other improvements to enhance passenger comfort and convenience.

Lack of capacity is also an issue at the Laguindingan Airport, according to AEV subsidiary Aboitiz InfraCapital. It said the gateway, which began operations in 2013, served two million passengers last year against its design capacity of 1.6 million.

For its proposal, Aboitiz InfraCapital has teamed up with Ireland’s daa International, the operator of Dublin Airport.

Villar, one of the richest Filipinos according to Forbes Magazine, has also been keen on provincial airports, which his group sees as a “real estate play” that complements its vast landholdings across the country.

Champions of airport privatization have long argued that more than the bottom line, privately run facilities would translate to better passenger convenience and amenities, oftentimes an afterthought in publicly run facilities.

The best local example is the Mactan-Cebu International Airport (MCIA), which was turned over to Megawide Construction Corp. and India’s GMR Infrastructure in 2014.

With intensified marketing efforts and a brand new international passenger terminal, the gateway handled 11.37 million passengers in 2018 versus 6.9 million in 2014.

Still, some stakeholders such as the world’s primary airline trade association remained skeptical. 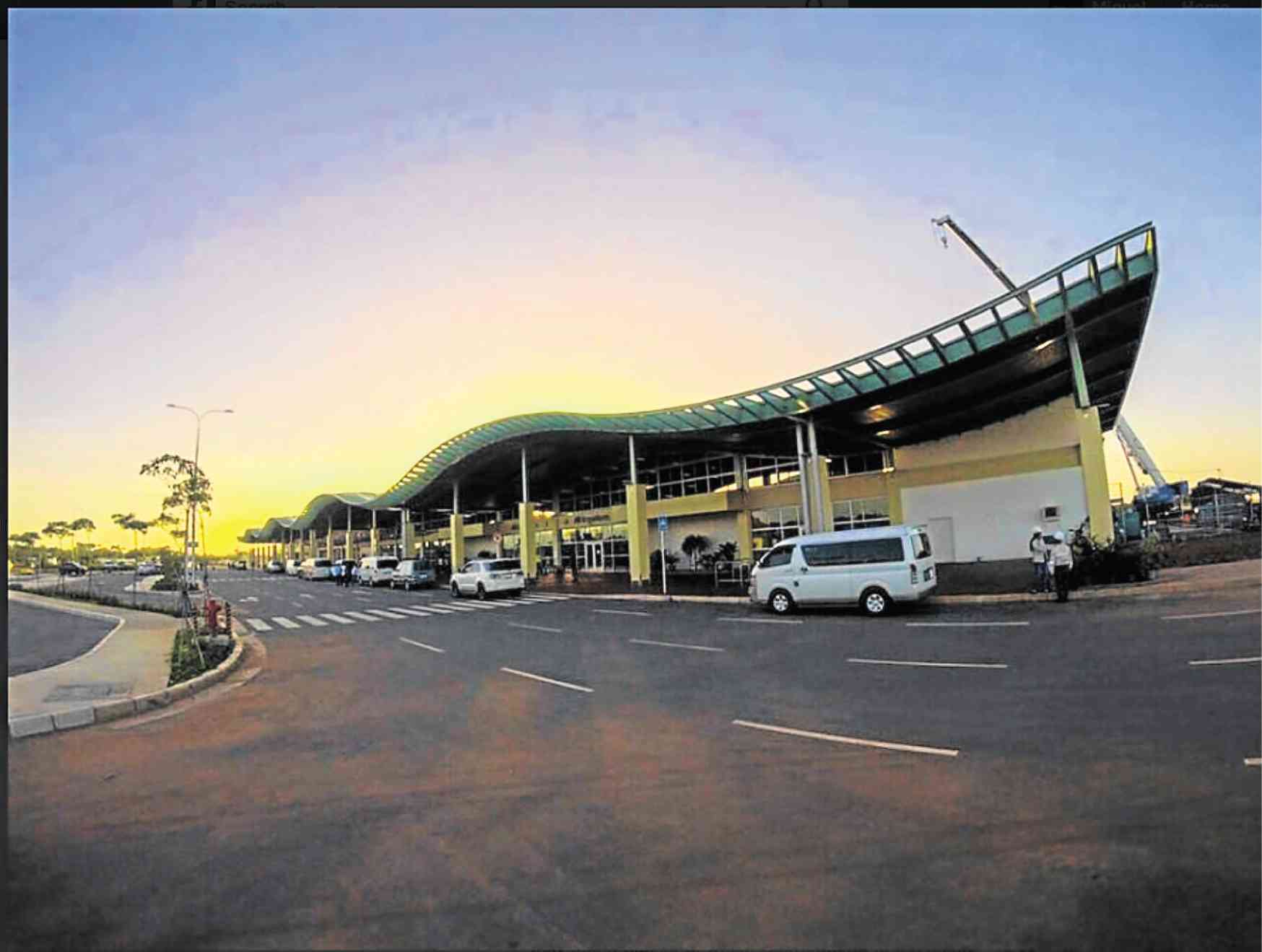 But IATA pointed out that there were also risks such as unnecessary investments, higher fees and conflict of interest.

“While airport privatization is not new, the success so far is often disappointing and without the appropriate regulatory controls and balances in place,” IATA noted.

“It is essential to understand the risks that can occur during privatization at airports in order to determine the appropriate regulatory framework,” it added.

What remains clear is private sector interest in airports has never waned, despite drastic shifts in government policy.

Gateways in Davao, Bacolod, Iloilo, Laguindingan and Bohol were supposed to be sold in airport packages or bundles under a public-private partnership (PPP) scheme under then President Benigno Aquino III. 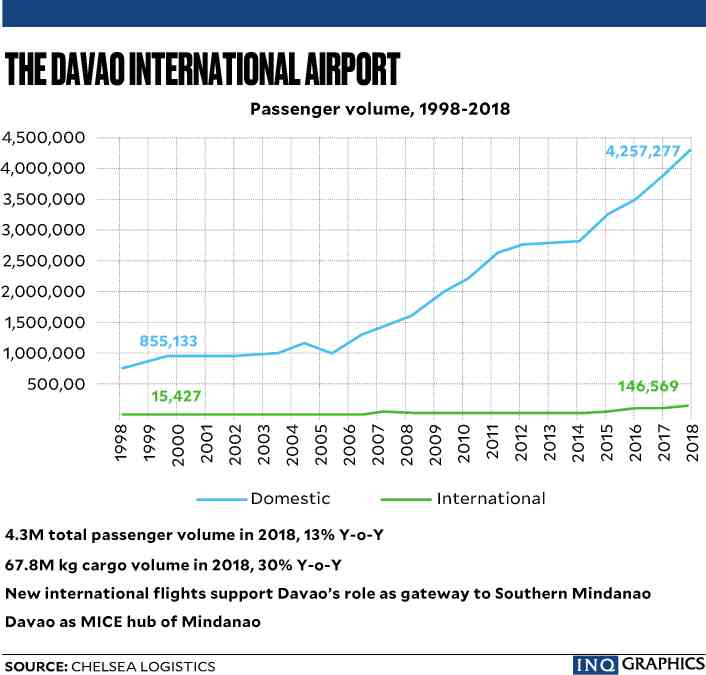 Passenger volume at the Davao International Airport hit 4.3 million in 2018, or 43 percent above what it was originally designed for.

The auction was never completed due to its proximity to the election period in 2016.

Under Mr. Duterte, the bundled strategy was removed from the PPP pipeline altogether and a preference for unsolicited offers was instead made known to the private sector.

Those projects would have been finished by now had the PPP project pushed through. 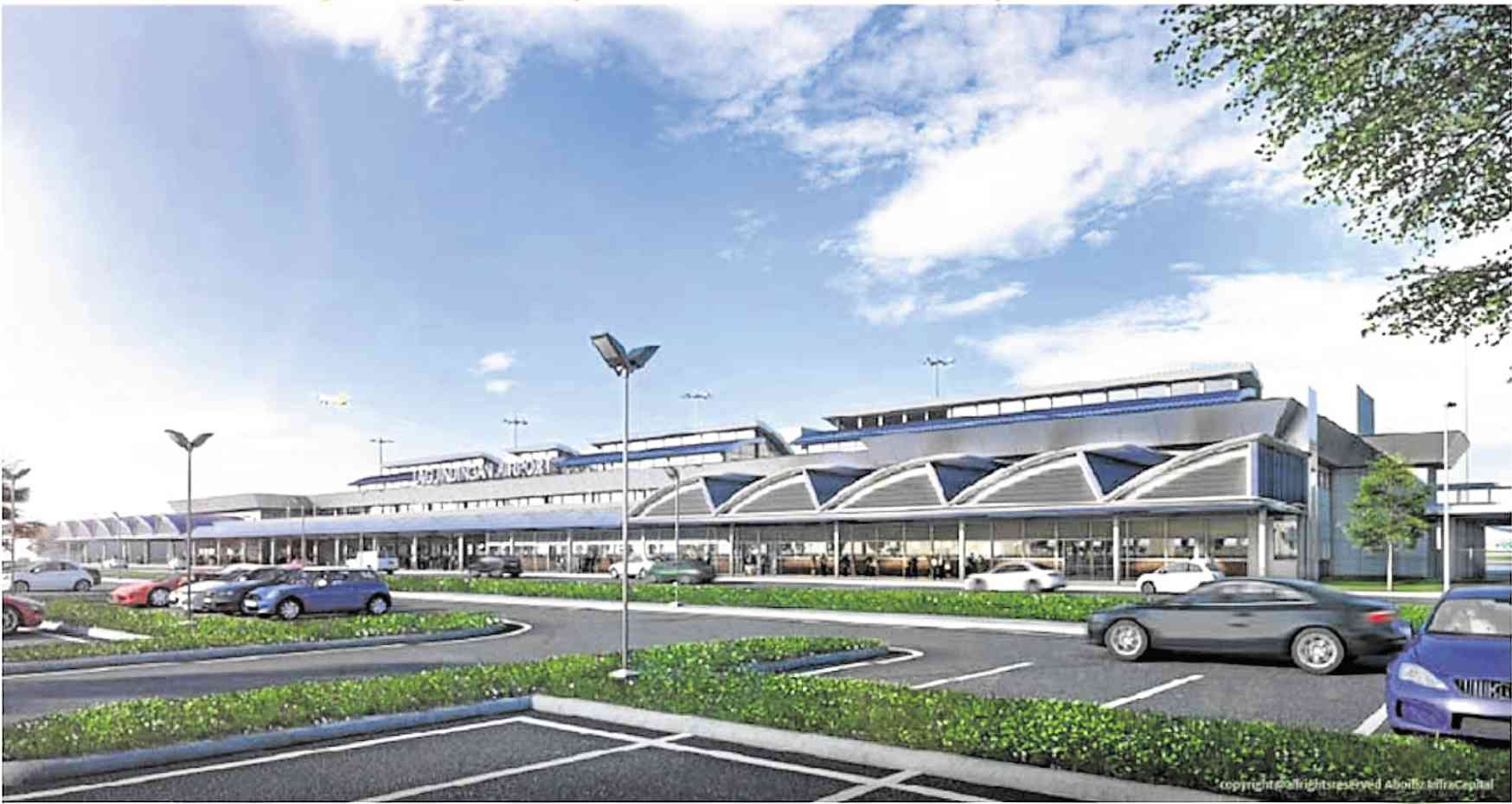 Aboitiz Equity Ventures wantsmore airports in its portfolio, one of which is the Laguindingan gateway as envisioned here.

Nevertheless, the government is also playing an active role in developing provincial airports.

Success story: Data showed passenger volume is up 85 percent in the five years since the Megawide-GMR consortium took over MCIA.

The DOTr said improvements were underway for gateways in Busuanga, Cauayan, Naga and Tuguegarao in Luzon; Bacolod-Silay, Calbayog, Catbalogan, Dumaguete and Tacloban in the Visayas; and Bukidnon, Ipil, Laguindingan, Mati, M’lang, Ozamiz, Sanga-Sanga, Siargao and Surigao in Mindanao. 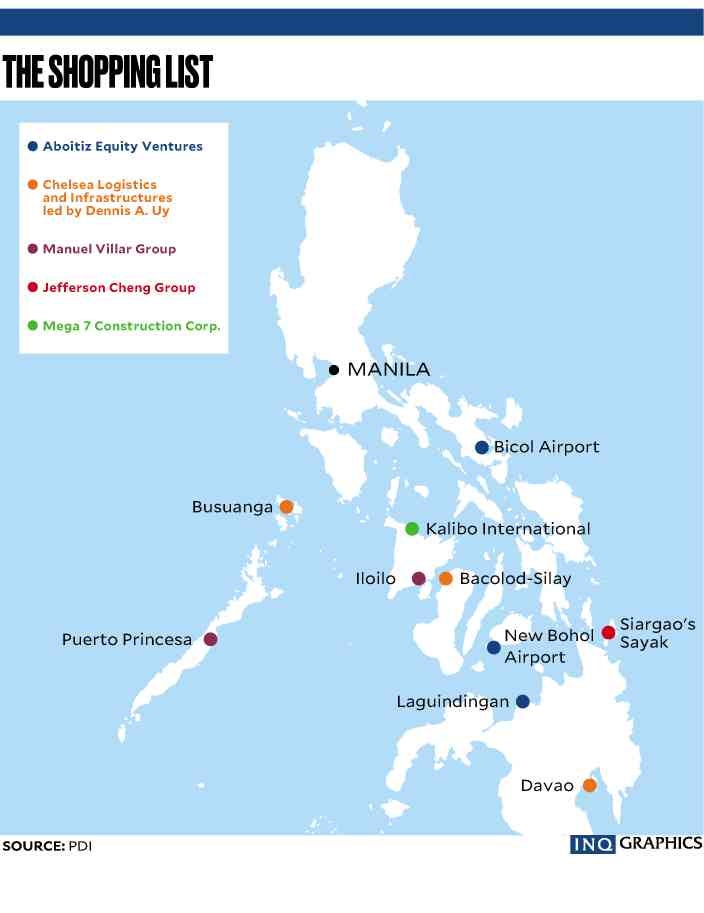 OWWA: Over 7,400 stranded OFWs so far sent to home provinces