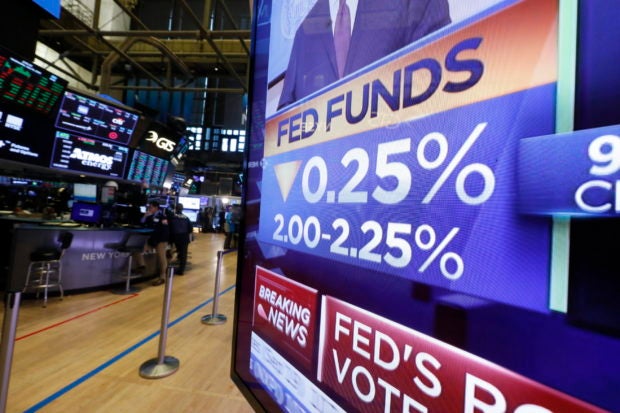 A television monitor on the floor of the New York Stock Exchange headlines the rate decision of the Federal Reserve, Wednesday, July 31, 2019. The Federal Reserve is cutting its key interest rate for the first time in a decade to try to counter threats ranging from uncertainties caused by President Donald Trump’s trade wars to chronically low inflation and a dim global outlook. (AP Photo/Richard Drew)

Benchmarks in Shanghai, Hong Kong and Australia tumbled while Tokyo was little-changed.

The Federal Reserve’s quarter-point cut, its first in a decade, was widely expected. But Chairman Jerome Powell disappointed investors by saying at a news conference the central bank had no plans for a long cycle of lowering interest rates. He called Wednesday’s cut a “mid-cycle adjustment.”

Powell was “less dovish than expected,” said Jingyi Pan of IG in a report. Pan said share prices declines reflect “significant disappointment” that the Fed wasn’t “embarking on the beginning of a rate cut cycle.”

The CME Fedwatch Tool, operated by CME Group Inc., said investors expect only one more U.S. rate cut of one-quarter point this year, down from previous expectations of two.

Powell’s comments “suggested that the Fed is largely undetermined in their next steps,” said Pan.

The Fed hopes the rate cut will counter threats to the U.S. economy ranging from uncertainties caused by the nation’s trade disputes to chronically low inflation and a dimming global growth outlook.

Fed officials had signaled their readiness to take action to help shore up the U.S. growth, which faces threats from a tariff war with China.

Wednesday’s cut was the first since December 2008 during the global financial crisis, when the Fed slashed its rate to a record low near zero and kept it there until 2015. After that, the Fed went on to make nine quarter-point rate increases from December 2015 to December 2018.

ENERGY: Benchmark U.S. crude fell 68 cents to $57.90 in electronic trading on the New York Mercantile Exchange. The contract gained 53 cents on Wednesday to close at $58.58. Brent crude, used to price international oils, lost 70 cents to $64.53 per barrel in London. It rose 42 cents the previous session to $65.05.