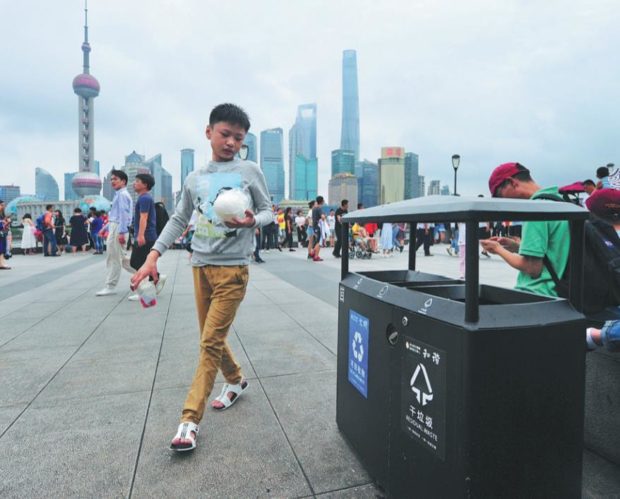 A young tourist walks toward a rubbish cabinet at the Bund in Shanghai. [Photo by Yang Yi / for China Daily]

SHANGHAI — Trash sorting was a hot topic in Shanghai in the weeks before a new municipal regulation on waste management took effect on July 1, requiring everyone, from households to businesses, to sort their trash into recyclable, kitchen, hazardous and residual waste.

Though the regulation inconveniences people while they form new habits and those who don’t comply face fines, it has boosted existing waste treatment business and will create new opportunities in the circular economy.

Dealing with waste is big business as 200 billion yuan ($29 billion) in investment will be needed if the current trash-sorting program in Shanghai is to be implemented across China, according to a recent report by Orient Securities.

The report calculated a 7.56-billion-yuan market for Shanghai in the whole industrial chain－education, monitoring of garbage disposal, transportation, and construction of waste treatment facilities. It then projected the Shanghai model to the national level, and estimated the market size will be around 200 billion yuan.

China plans to set up domestic waste classification systems in 46 major cities by next year, and all the cities at prefecture level and above, about 300, should have similar systems to classify and dispose of trash by 2025, according to the Ministry of Housing and Urban-Rural Development.

Zhang Lequn, deputy director of the urban development department at the ministry, said in a news conference in June that the government will inject 21.3 billion yuan into the building of waste treatment facilities.

As the trash-sorting program is implemented in Shanghai, more kitchen and food waste, which will demand proper treatment facilities, is being separated from residual waste.

According to the Shanghai Municipal Administration of Landscaping and City Appearance, Shanghai now has more than 6,000 metric tons of kitchen waste every day, but the existing kitchen waste treatment facility can only process about 5,000 tons.

The administration is responsible for the city’s domestic waste management, and it aims to increase the capacity of waste treatment in Shanghai to handle more than 20,000 tons of residual waste through incineration and to utilize 7,000 tons of kitchen waste every day next year.

The company operates an organic waste treatment center in Pudong New Area that turns kitchen waste into electricity. Its current capacity is 300 tons of kitchen waste per day, and the plant expansion will allow it to process another 700 tons.

The plant uses correctly sorted organic waste to produce biogas, but when it started in 2017, about 30 to 40 percent of the waste it received contained other waste such as plastic bottles, construction trash and paper, which needed to be removed first to avoid lower efficiency during the anaerobic procedure.

The purity of the kitchen waste rose significantly in 2018 when Shanghai announced an action plan for trash sorting, and now after the implementation of the regulation, 99 percent of the waste it receives meets the minimum quality level, said Hua.

The expansion of Liming Resources is just one example of the acceleration of the capacity building taking place in Shanghai.

A biological kitchen waste treatment center is due to open by the end of July on Chongming Island, Shanghai, that will use kitchen waste to feed fly maggots, which on maturity can be used as animal feed and their droppings as fertilizer.

The center is operated by Shanghai Yuanshi Environment and will work as a biotechnology demonstration area.

“If our technology meets market requirements, we hope it can be applied in other districts in Shanghai,” said Na Chenning, co-founder of Shanghai Yuanshi Environment, adding that the profit from processing 1 ton of kitchen waste through this technology is about 700 to 800 yuan.

Apart from waste treatment, many startups are eyeing opportunities in other parts of the long value chain.

Yang Fei, a lecturer of economics at Zhejiang University of Science and Technology, said the compulsory trash sorting will make once valueless trash profitable.

According to the National Bureau of Statistics, China produced 215 million tons of domestic waste in 2017, up nearly 60 percent from 2001.

The State Council plans to reach a recycling rate of at least 35 percent of domestic waste in the 46 major cities by 2020.

Heather Kaye, an American fashion designer, has started using recycled materials to make swimwear. She and her friend Indian designer Itee Soni registered a company called Golden Finch in Shanghai in 2010, and they launched a new brand Loop Swim in 2019 to highlight the company’s sustainable production.

Kaye said she was excited to see Shanghai’s trash-sorting program taking effect, and the incredible level of commitment from the government and the citizens wanting to use resources wisely impressed her.

“We know China has studied recycling systems around the world before implementing the current plans, and is looking for ways to make recycling profitable for the private companies who will likely take it over,” she said. “When waste has value, people see opportunities.”

Gao Cheng, a former veteran private equity investor from Hong Kong, is also digging for gold in the recycling industry. She founded a startup EcoEasy in July, and wants to introduce biodegradable food containers into the fast-growing food delivery market.

“The trash-sorting program is good news for us, because it is an important step toward building a circular economy in China,” Gao said.

Chinese people used an average 60 million take-away containers per day in 2018, and the number is still growing, but most of them have not been recycled because the containers are usually contaminated by food and oil, she said.

“Although the existing kitchen waste treatment centers in China might not have the facility and standards to process biodegradable plastics together with food waste, this is what we are working to solve,” she said.

Song Ya’nan, an environment industry researcher at Guotai Junan Securities, said the trash-sorting program has created a social consensus on supporting businesses related to environmental protection, and that will help the industry grow in the long term.

“The upgrade of waste treatment facilities will push the growth, and new technologies in waste processing will receive more investment,” Song said.