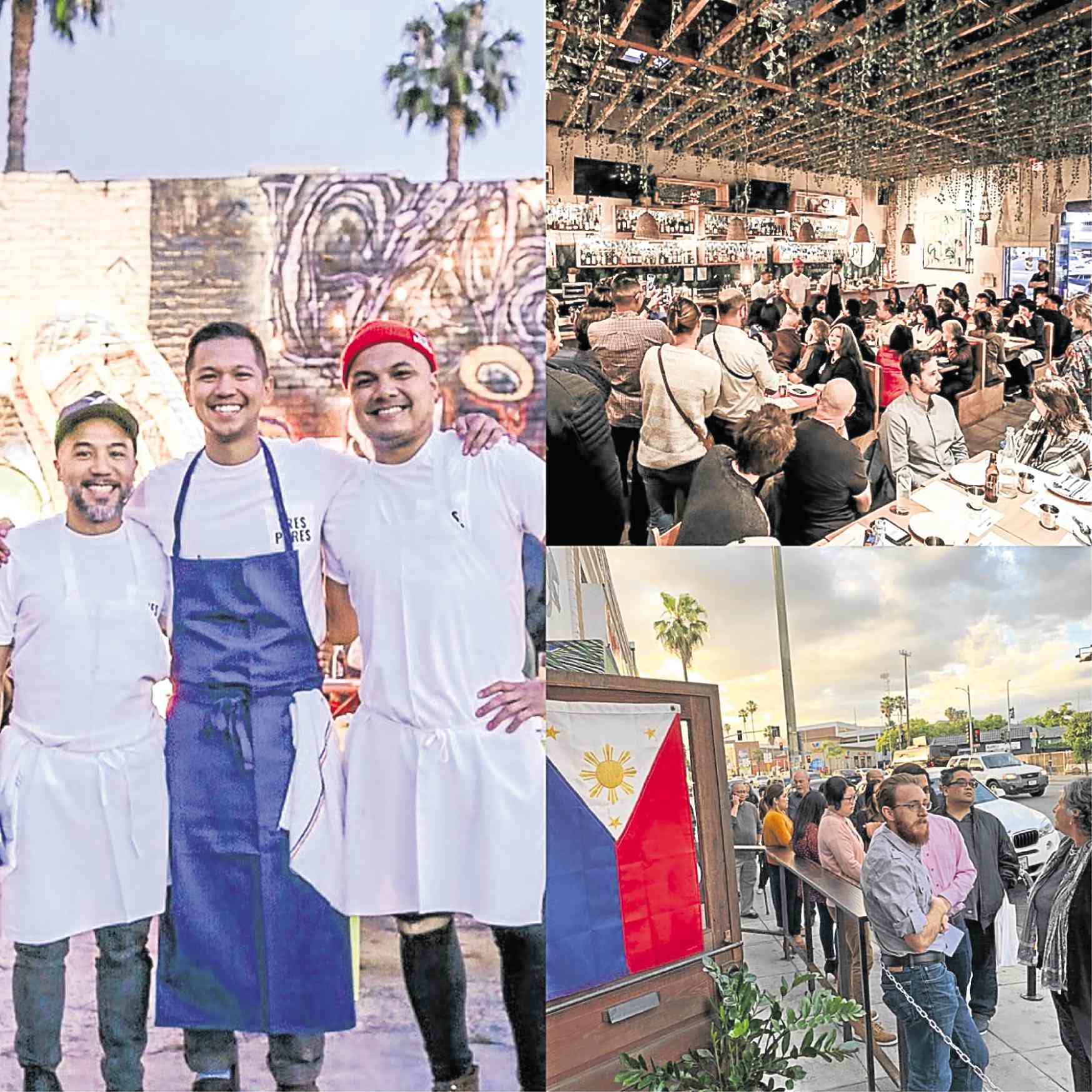 May 20 was a big day for Filipino food in Los Angeles, California.

Charles Olalia of Ma’am Sir on Sunset Boulevard in Los Angeles hosted the Filipino food event Tres Pares with superstar guest chefs Tom Cunanan of Bad Saint, who flew in from Washington D.C., and JP Anglo of Sarsa Kitchen, who flew in from Manila.

Tom Cunanan is a much celebrated chef nowadays.

Just last May 6, he was awarded the James Beard Award for Best Chef in the Mid-Atlantic, a huge honor.

Just to be nominated, which he was in 2017 and 2018, is already a huge honor. To win this 2019, and to have his name there etched alongside some of the greatest chefs of the world, is an incredible accomplishment that should make every Filipino beam with pride.

Charles Olalia, who had worked with Guy Savoy and Thomas Keller, and as executive chef of Patina of Joachim Splichal, is also raising the Philippine flag in his part of the US.

He has received rave reviews from the LA Times. Just last January, Bill Addison of the LA Times wrote, “What never wavers at Ma’am Sir is its ebullient spirit. … It conveys a gracious respect for the customer, though Olalia’s cooking also transmits something beyond politeness. This is a chef settling into his own address. He decides here how much porky taste the pork sisig should retain, and it turns out to be exactly the right amount.”

JP Anglo was the only non-FIl-Am in the trio although he can certainly pass for one with his American accent.

He is a Filipino celebrity chef who had several television shows, both for cooking and travel, and is the owner-chef of Sarsa, the well-loved Ilonggo bistro.

But more than being a chef, Chef JP is a patriot, promoting the Filipino spirit and Filipino flavors wherever and whenever he can, just out of sheer love for Filipino food. And he is on a roll! Just last April, he was promoting Filipino food in Singapore at a collaboration dinner with Chef Kurt Sombero of Meatsmith. This May, aside from this collaboration dinner at Ma’am Sir, he was also part of the Filipinx Garage Party (that’s really an x, not an o at the end of Filipinx) held at the roof of The Standard, where he joined other Fil-Am chefs making waves in the US: Chef Tom Cunanan of Bad Saint, Chad Valencia of Lasa, Russel Victorioso of Cafe Birdie.

The dinner at Ma’am Sir was much anticipated, with tickets sold out quickly, and guests spilling over to the garage of the restaurant.

The objective of the dinner, Chef JP explained, was to take the guests on a journey and they achieved this by presenting nostalgic notes along with the chefs’ vision of the heights that Filipino cuisine can be taken to.

Dinner began with a bang with a dish from Tom Cunanan. Ordinarily, it would be called labanos. But Cunanan upgraded the humble radish by presenting it with burnt coconut and pistachios.

While Cunanan was a tough act to follow, Chef JP rose to the occasion with his elevated monggo. Monggo, as we know, is really just a simple mung bean stew or soup, sometimes topped with dilis or chicharon. But Chef JP’s monggo is quite complex.

First, his base of monggo stew was flavored with chicken jus and dried salted fish. And he added a surprise secret ingredient: chardonnay.

The second layer was for texture. He created a “monggo chicharon” using crumbed chicharon bulaklak, crumbed dilis and crispy monggo (monggo that was dried out to a crisp).

And for a third layer, he created a salsa of chili and tomatoes that he said was added to cut through the richness of the fat (of the chicharon). 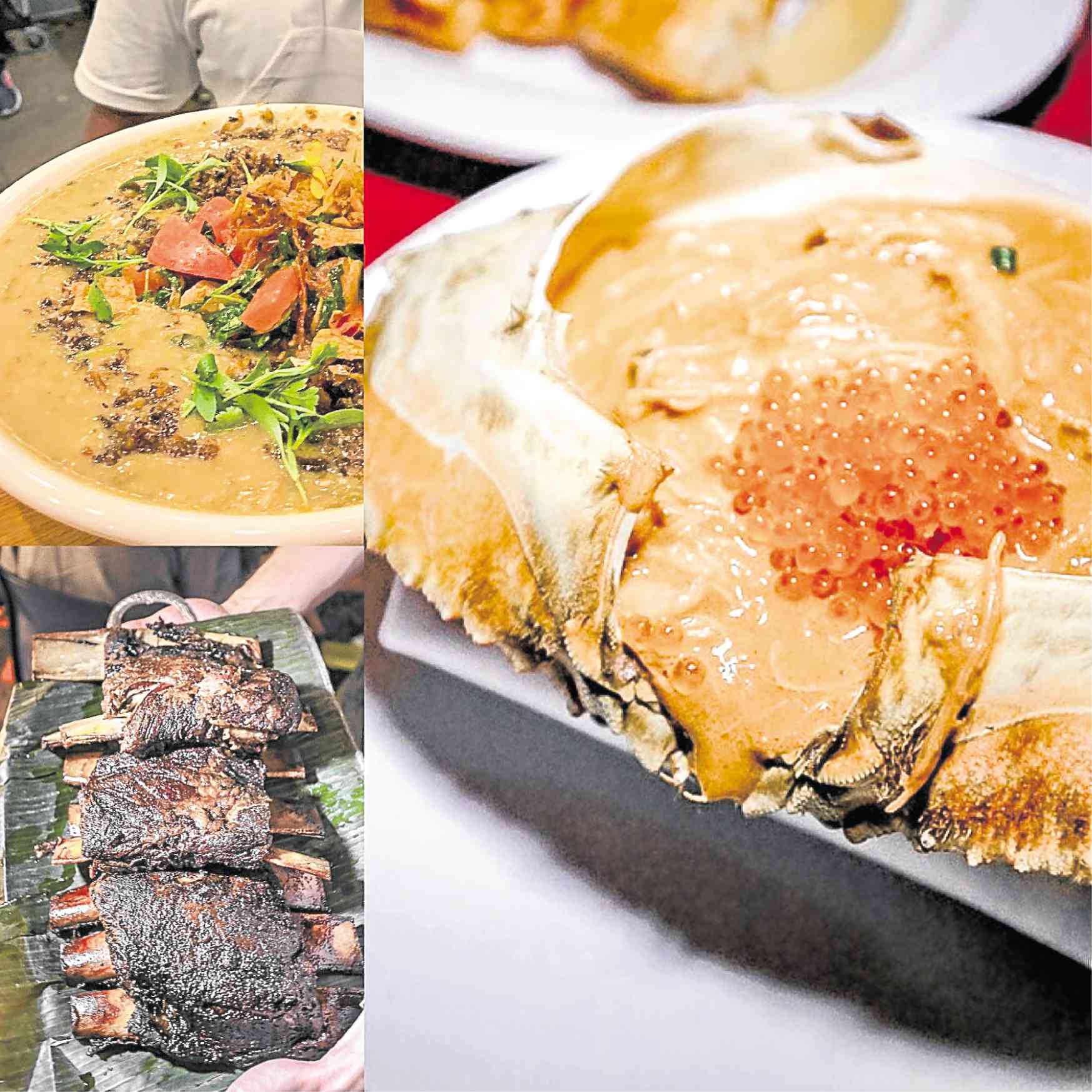 Chef JP responded with a not-so-simple pancit palabok. This was another mad creation of the very inspired chef. To make the palabok sauce, he used smoked tinapa and a shrimp bisque stock. For character, he added a layer of diced bangus belly tossed in olive oil and mixed with tomatoes, salted eggs, crispy shallots, spring onions and soyomansi. Crowning the palabok, instead of chicharon crumbs which he incorporated into the mixture, he used a very crispy salt and pepper squid.

Chef Tom answered back with his version of laing using bitter melon and tendrils, and shrimp. Chef JP returned with a mad version of Kare Kare. This is another interesting one, with what Chef JP described as “three textures of protein”. First, the brisket, which was fork tender after being braised for a very long time. Second, for the sauce, Chef JP thickened this using tendon instead of flour, which was braised for 10 hours, cooked as confit, then pureed. Third, a wafer-thin tripe served on top.

On the side, “tendon bagoong”, which was bagoong mixed with a bit of the pureed tendon, and given extra spirit with a bit of Tanduay Gold! Incredible!

This was served with “garlic” rice, a collaboration of Chef JP and Chef Tom, using crispy chicken skin in lieu of garlic.

And for the main course, the host chef, Charles Olalia, served a very scrumptious Lechon Baka. No, there was no spit roast with an entire calf outside, as we would have it at fiestas.

Instead, the chef, whom Chef JP’s wife Camille described as amazing with barbecues, served a smoked bone-in short plate, his version of tadyang.

More barbecues were served by the host chef, as well as a Mochiko Bibingka for a sweet ending to what was undoubtedly a welcome overload of Filipino flavors.

Chef JP was ecstatic at the outcome, happy that the guests saw “the full range of Filipino food”. “We can really advance and elevate simple Pinoy dishes,” the passionate chef said.

What was most impressive was that these three chefs came up with their menu only three days before the event. Chef JP did not bring anything from Manila because he was afraid of the strict US customs restrictions. Which only proved the sheer talent of these three chefs.

With ambassadors like the Tres Pares, who are making traditional Filipino food hip, modern, and downright cool without losing its identity or flavors, we can be sure that come what may, Philippine cuisine will really be celebrated around the world.

Read Next
Pimentel: No tobacco tax hike if it will hurt businesses
EDITORS' PICK
Quick chat with Nicole Andersson: ‘You really don’t need much to be happy’
Nograles: Cabinet members to donate 75% of monthly salary to aid COVID-19 fight
Robredo spox thanks Duterte for defending VP’s efforts vs COVID-19
IATF to LGUs: Issue ordinances vs attacks on frontliners, COVID-19 patients
10 Filipinos positive for COVID-19 in UK, 7 in Ireland — envoy
Diokno to Duterte: OK to make fun of buck tooth, but focus on people’s needs first
MOST READ
Coronavirus hotbed Rizal to shut borders on April 6
Gov’t mulling quarantine period extension of 15-20 more days
ADB warns PH against prolonged lockdown
Sotto on Isko Moreno’s call: We do our job without the media following our every move
Don't miss out on the latest news and information.