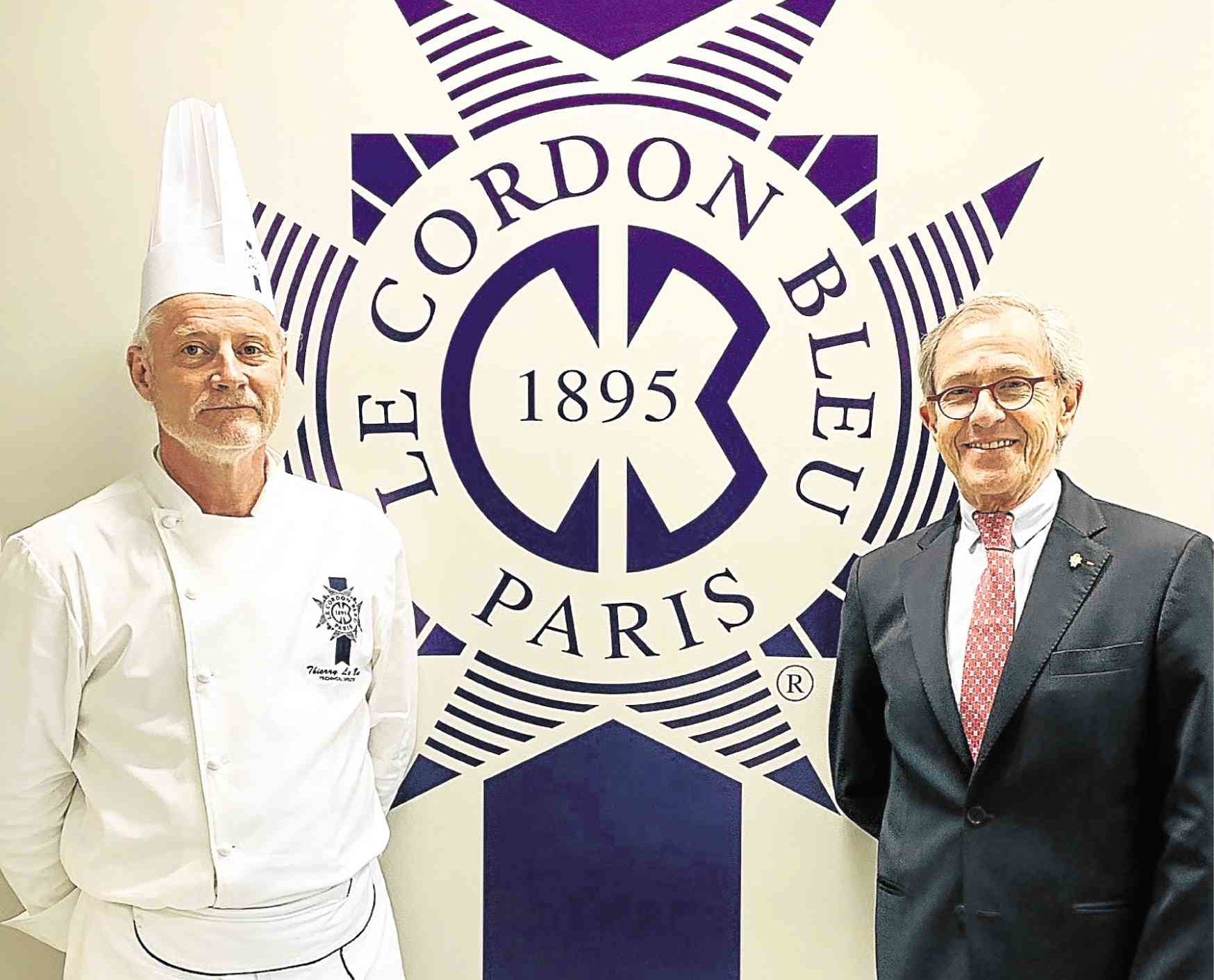 Of course in true Ateneo fashion, the Blue Eagles are quick to share why this school would be “the best.” This time, though, the bragging right is well-earned.

The history of Le Cordon Bleu alone is worth taking pride in.

I am happy to highlight, first and foremost, a fact that Le Cordon Bleu International president and CEO Andre Cointreau, in my interview with him at the newly opened school in Arete, emphasizes: that their founder was a woman.

“Le Cordon Bleu was created by a woman, who could have been a nun; she was unmarried,” Cointreau notes. “She thought it was unfair that women could not be trained in the culinary field, that although they were cooking for their families, it was still a macho world for hotels and restaurants. She was really dedicated to the idea of training women.”

The woman is Marthe Distel, a journalist and publisher (!). She started the culinary magazine La Cuisinière Cordon Bleu. To increase readership, Distel offered subscribers cooking lessons with professional chefs, with the first class held in January 1895 in the kitchens of the Palais Royal. These classes later on became a more formal school, Le Cordon Bleu.

Later the school became known not only for training women but for training an international audience of aspiring chefs who wanted to master the art of cooking using French techniques. Cointreau notes their first international student was from Russia, in 1978; and their first Japanese student a few years later. One of their most notable graduates is the legendary Julia Child, an American who studied at Le Cordon Bleu Paris in 1948 and authored the book Mastering the Art of French Cooking before becoming a television personality in the US.

Today, there are 30 Le Cordon Bleu institutes around the world, each making a dent in the local culinary scene.

In Thailand, Le Cordon Bleu Dusit became the first culinary school to be accredited by the country’s Ministry of Education, teaching a comprehensive professional Thai cuisine curriculum with more than 200 recipes of traditional, regional, royal and modern contemporary Thai dishes.

In Japan, Le Cordon Bleu has offered a special bursary program, developed as an official project by the Ministry of Agriculture, Forestry and Fisheries of Japan for the Promotion of Japanese Cuisine & Food Culture.

Cointreau emphasizes what they teach are French techniques, not just French recipes; and students are encouraged to explore local flavors.

He acknowledges that in each country, one must also explore a nation’s culinary history and traditions. Just as in France, where each region and even certain families are recognized for their heritage recipes, so must it be for each country.

But Le Cordon Bleu is on a mission to codify not only recipes but also cooking techniques that have vanished with the evolving world. By learning and codifying these techniques around the world, Cointreau emphasizes, “we are at the service of the culinary arts of tomorrow.”

“We come not only with recipes but with a grid of training even before a student learns recipes,” Cointreau explains. So a Le Cordon Bleu graduate would be able to demonstrate not only memorized recipes but also the technical skills needed to compete and thrive in the culinary world.

“But why did you partner with Ateneo, of all the schools in the Philippines?” I asked Cointreau. The Le Cordon Bleu International president and CEO explains it’s because of their shared values of “integrating a true mastery of craftsmanship with enhancing and shaping the characters and  competencies of [their students].”

He has also become good friends with Fr. Bienvenido Nebres (the longest serving president of Ateneo de Manila) and loves that Ateneo focuses not only on educational excellence but also on the development of character and values, such as the importance and joy of spreading the message of Christ to the underprivileged. He notes the founder of Le Cordon Bleu also valued not only excellence and empowerment but also charity as she in fact left Le Cordon Bleu to an orphanage when she died in the 1930s (the school was later bought by another woman, Élisabeth Brassart.)

More than its history, however, Cointreau shares that the advantage of Le Cordon Bleu over all other schools is its incredible global network of multiawarded chefs and educators.

“We are probably the only one to have such an international network. We have been around for so long; we are accredited in more than 10 countries. Not only are we accredited but we can [have] exchanges for our teachers, [and other] programs, internships,” Cointreau stresses.

Of this advantage, chef Theirry Le Baut, technical director of Le Cordon Blue Ateneo de Manila, says: “There are a lot of us chefs (in Le Cordon Bleu) in different countries, in different parts of France, and all of us worked either in a big restaurant or a Michelin-starred restaurant so we have the combined experiences of different chefs from around the world. So if we want to know about a technique, we can just reach out to each other; I can go to Japan or London and stay there for 15 days to see their new techniques and recipes, or they can come to the Philippines. We work together and try to find the best techniques to teach our students. For me, this is what makes Le Cordon Bleu unique.”

But he also emphasizes that their strength is in giving each student the skills to be excellent in cooking using French techniques.

The school then gives each student all the tools he or she will need for cooking—the French way, of course: a set of knives, thermometer, pans, etc. (Students can go home with this set and keep the tools for life.) “Each student has his own work station where the student is personally guided by the professor as he learns each recipe. And everything is precise, down to the measurement of millimeters and temperatures, whether it be for a potato that must be six centimeters in size and 50 grams, or fish that must be cooked only up to 54 degrees, no more.

“It must be perfect all the time,” Le Baut stresses.

Here’s the Ateneo challenge, though: all applicants must pass the Ateneo College Entrance exam. But once you graduate, you will receive two diplomas: one from the Ateneo and another from Le Cordon Bleu.

Now you can be an eagle that is not only blue but Le Cordon Bleu.