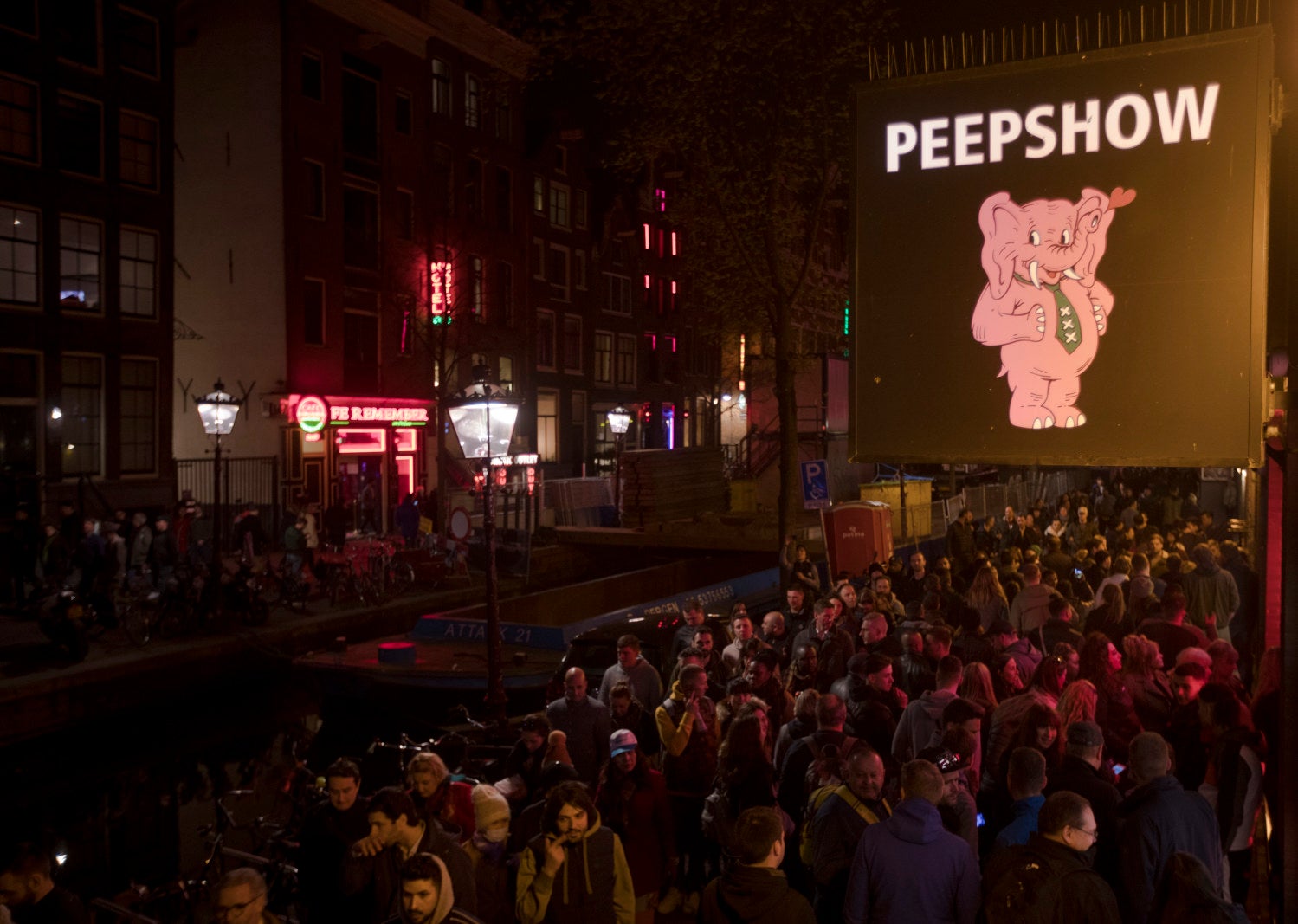 Tourists are bathed in a red glow emanating from the windows and peep shows’ neon lights are packed shoulder to shoulder as they shuffled through the alleys in Amsterdam’s red light district, Netherlands, Friday evening, March 29, 2019. The Dutch capital plans to ban guided tours of the red light district, saying they are disrespectful and contribute to congestion in the narrow, canal-side streets where scantily-clad sex workers sit behind windows to attract customers. (AP Photo/Peter Dejong)

AMSTERDAM — The city of Amsterdam’s latest attempt to rein in the nuisance of over-tourism by banning guided tours of the red light district has run into opposition from some of the people it is intended to protect: sex workers.

The Dutch capital plans to ban such tours, saying they are disrespectful and contribute to congestion in the narrow, canal-side streets where scantily-clad sex workers sit behind windows to attract customers.

The first step in the new policy was taken Monday night in the red light district, with tours banned from 7 p.m.

On a recent Friday night, the problem was clear to see: Tourists bathed in a red glow emanating from the windows and peep shows’ neon lights were packed shoulder to shoulder as they shuffled through the alleys.

But sex workers’ union Proud questions whether banning tours will reduce tourist numbers and argues that guides educate visitors and encourage them to behave more respectfully toward the women.

“It could also be that now there are no guides that people just wander into the area themselves and gawk at the women behind the window and take photos because there is no one anymore to inform them how to behave or what the rules of the game are in this area,” said a sex worker who goes by the name of Velvet and is the advocacy coordinator for Proud. Velvet declined to give her real name, saying that because of the stigma attached to sex work, most sex workers use a working name or pseudonym to protect their privacy and safety.

Amsterdam’s Prostitution Information Center, which is housed in the same building as Proud, offers its own red light district tours.

The total ban on guided tours, which is planned to come into full force on Jan. 1, is another step in the city’s campaign to reduce the problems associated with over-tourism and part of a broader package of measures reining in tours in the city.

Bobien van Aalst of the Dutch tour guide association Guidor slammed the ban on tours, not just to the red light district but to other historic parts of the city. She said it means guides won’t be able to explain to tourists where Rembrandt van Rijn painted one of his first famous works or where the painter’s wife is buried.

“I mean it’s like in Paris if you’re forbidding (tours) to go to the Arc de Triomphe or the Eiffel Tower,” she said.

City Hall says that more than 1,000 tour groups per week now operate around the Old Church Square in the heart of the red light district.

“Yeah, there’s really over-tourism there — too crowded. I mean there were evenings where … residents basically couldn’t leave their homes anymore because the alleys were blocked,” the city’s deputy mayor, Udo Kock, told The Associated Press.

People who work in Amsterdam’s sex industry question whether there are more tourists, or whether similar numbers are squeezing into a red light district that has shrunk in recent years as hundreds of the sex workers’ windows have been shuttered in an attempt to diversify the narrow streets.

Kock acknowledges that not everybody is happy, but says many others are pleased that the city is tackling the tours.

The red light district is a tourist magnet, especially after dark, with crowds of people waiting to get into sex shows and visiting the Red Light Secrets Museum of Prostitution, where you can experience the windows from a sex worker’s perspective by sitting on a stool in front of a “window” onto which images are projected of men walking past and peering in.

The museum’s manager, Natascha Flipsen, agrees that guided tours help educate the visitors not just about the history of the centuries-old red light district, but also about how to treat the women who work there with respect.

And she says that tourism is good for the business.

For tourists, “this is like the once in a lifetime experience, so they visit the sex work as well of course,” Flipsen said.