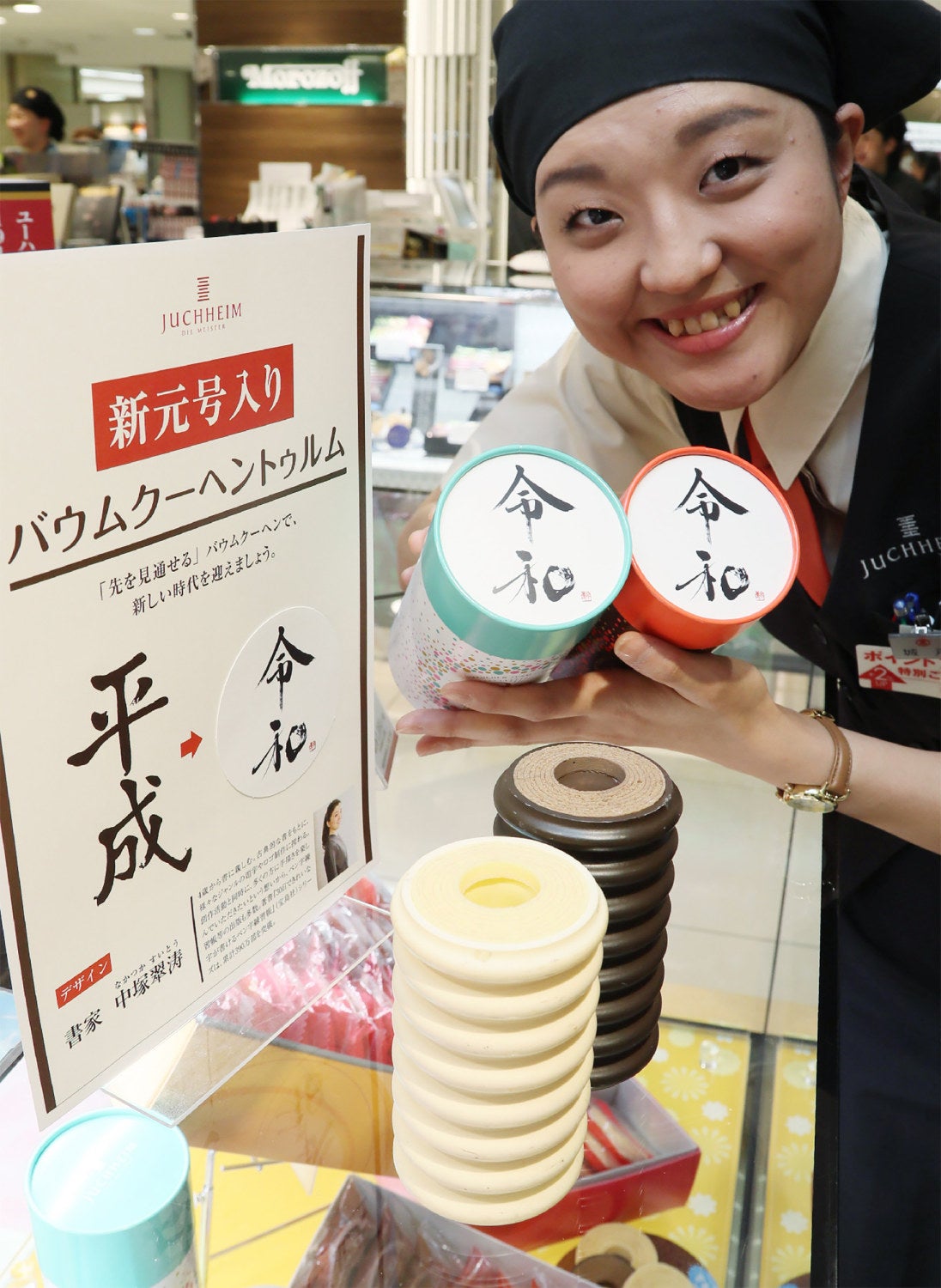 This picture taken on April 1, 2019 shows an employee of a department store displaying sweets designed with the new era name “Reiwa” with its packages in Yokohama. AFP/JIJI PRESS

TOKYO — No sooner had Japan announced the name of its next imperial era than enterprising businesses across the country began emblazoning “Reiwa” on everything from cupcakes to keychains.

At several coffee shops, enterprising — and skillful — baristas rendered the name that implies “harmony” in the foam of lattes, with one artist even depicting the entire scene of Cabinet Secretary Yoshihide Suga holding the new name aloft.

The impulse to quickly monetize the new era name is virtually unprecedented, because for hundreds of years, each new name has been announced upon the death of the previous monarch, during a period of mourning when such enterprise would have been unseemly.

But because Emperor Akihito has opted to abdicate the throne, which will be assumed by Crown Prince Naruhito next month, a festive, and entrepreneurial, spirit surrounded the era announcement on Monday.

And while the current imperial couple enjoy widespread support, some feel less warmly about the Heisei era of Akihito’s reign.

“Some Japanese also have negative feelings towards the Heisei era,” said Kazuo Yawata, a former bureaucrat who now teaches at Tokushima Bunri University, citing events including the collapse of the bubble economy and natural disasters.

“So they are happy that we are moving to another period, and that was solidified by the festive atmosphere that was seen straight after the announcement,” he told AFP.

Yawata was among those waiting for the era name’s announcement for his own reasons: just three hours after “Reiwa” was unveiled, his new book was listed for sale online entitled “Reiwa, History of Japan: The Journey of the 126th Emperor and the Japanese.”

“Given the current context, I suspected the direction they would take with the new era name, so I wrote it beforehand and I basically just had to add the chosen name into the book and the cover,” added Yawata, a supporter of the nationalist positions of Japan’s government.

But most of those waiting for the name to be revealed for business reasons had less intellectual offerings, like the Osaka restaurant that put a pizza on its menu featuring “Reiwa” cut from cheese on top.

And the award for the quickest off the mark might perhaps go to the company that a private television station revealed had put on sale a metal cup engraved with “Reiwa” just two minutes and 27 seconds after Suga’s announcement.

In Tokyo, residents and commuters ditched their standard silent demeanors to do literal battle in scrums for special edition newspapers featuring the new name — many of which quickly turned up on online auction sites.

And others snapped up stickers, smartphone covers, t-shirts, pins and even commemorative bottles of the Japanese tipple sake to mark the occasion.

The announcement also drew surprise attention to some unsuspecting individuals, because the two characters in “Reiwa” can also be read other ways, including as the name “Norikazu.”

So Norikazu Kawagishi, a constitutional expert at Tokyo’s Waseda University, found himself having to fend off a deluge of press attention after the announcement, to the amused delight of his students.

He might take heart though from the fact that several restaurants have pledged to offer free meals to those whose first or last names use the same characters as “Reiwa.”

Read Next
US investigating Kia, Hyundai over ‘non-crash fires’
EDITORS' PICK
KWF has no power to ban, censor written works – Lagman
Powered by style, innovation and passion
In Borongan, nuns play hoops (not mahjong)
A laptop that maximizes your WiFi so you can maximize your productivity
Why Tagle is a leading papal contender
House energy committee chair Arroyo bats for cheap electricity
MOST READ
Why Tagle is a leading papal contender
Zubiri on SRA mess: Shameful, disgusting
SRA officials should resign after ‘illegal sugar order’ – Zubiri
Arjo Atayde reveals proposal to Maine Mendoza was ‘more than a year’ in the making
Don't miss out on the latest news and information.