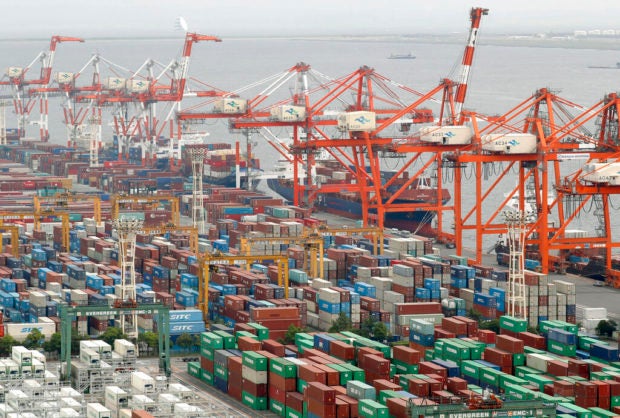 This July 2018 photo shows containers piled up at a Tokyo port. Japan’s exports have fallen 8.4 percent in January from a year earlier while imports also edged lower, suggesting a deepening impact from China’s economic slowdown.  AP

TOKYO — Japan reports its exports tumbled 8.4 percent in January from a year earlier, as slowing Chinese growth pushed its monthly trade deficit to the highest level in nearly five years.

Exports to all of Asia dropped 13 percent year-on-year, largely due to the 17 percent plunge in shipments to China, where growth recently has fallen to its slowest pace in three decades.

The politically delicate trade surplus with the United States rose 5 percent to $3.3 billion, as exports climbed nearly 7 percent helped by rising shipments of cars and power generating machinery. But imports of American goods rose by a slightly higher margin on strong growth in purchases of U.S. liquefied gas, coal and grains.

That was the fourth consecutive month of deficits and the biggest such gap since March 2014.

The weakening in trade is unwelcome news with the economy expected to slow in October following a hike in the sales tax to 10 percent from the current 8 percent.

The decline in exports in January spanned most major categories of products, from chemicals and machinery to electronics and cars.

Imports of crude oil fell sharply, as measured by value, largely due to lower prices.

The trends suggest a deteriorating outlook for trade as the U.S. and China spar over technology policies and other issues, Marcel Thieliant of Capital Economics said in a commentary.

“Looking ahead, export growth should remain weak. We expect GDP growth in Japan’s main trading partners to soften from 3.4 percent last year to 2.6 percent this year,” he said. “What’s more, the recent sharp deterioration in business surveys suggests that external demand may weaken more than we had anticipated.” /ee