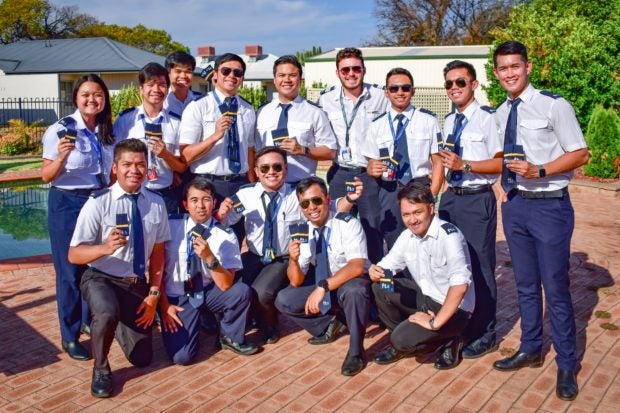 The first batch of Cebu Pacific Cadet Pilots receive their third officers gold bars following their intensive aviation training program at Flight Training Adelaide (FTA) in Australia last February 2019 . They are on their final phase of training, with their graduation scheduled in June 2019.

Manila, February 15, 2019 – Applications are open for a new batch of Cadet Pilots who will be trained to become full-fledged aviators for Cebu Pacific (CEB). CEB will be recruiting 16 candidates who will undergo a “study now, pay later, zero-interest” training program to become full-fledged commercial pilots with guaranteed employment with the airline.

Application period for the sixth batch of Cebu Pacific Cadet Pilots will run from February 15 to 24, 2019. Interested applicants may visit http://www.flyfta.com to apply for the program. Applications will open starting February 15, 2019.

The Cebu Pacific Cadet Pilot Program is open to all Filipino citizens who are college graduates who are proficient in English. There are no preferred college degrees, and applicants need only have an average grade of at least 70% or its equivalent in subjects related to Math, Physics and English.

The program entails 52 weeks of week integrated flight training, theory and education at Flight Training Adelaide (FTA) in Australia. They will undergo learning modules, train in a flight simulator and then on to an actual aircraft. Successful candidates will receive Diplomas of Aviation for Commercial Pilot License – Aeroplane, Instrument Rating, and for Pilot in Command. They will also undergo an additional four weeks of training to obtain a Pilot’s License under the Civil Aviation Authority of the Philippines.

CEB cadet-pilots need not worry about expenses related to the flight training, as the airline will shoulder the costs first—including a stipend, and amortize the payment for the course while they are employed. The entire program will be financed by Cebu Pacific, and successful cadet-pilots who enter the CEB corps of pilots will reimburse the cost of the program through salary deduction over a maximum of ten years at zero-interest.

There is no application fee for the program. The application process begins with an online pre-screening. This is followed by an on-site screening for core skills and pilot aptitude tests, among other examinations where a fee of AU$425.00 (about PHP19,000) will be charged. FTA will screen and shortlist all the candidates. Cebu Pacific and FTA will then jointly select the final Cadet Pilots through a final interview and deliberation.