Errands, time, a motorbike lead to a venture 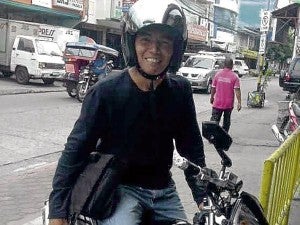 SINCE their families frequently ask them to do simple errands like paying their water or electric bills, they came up with the idea of earning from running errands using Keith’s motorcycle.

TACLOBAN CITY—Running errands for family and friends turned out to be a good business for Leighnard Keith Sacramento and Rosalie May Getalado.

Before going into the business, Keith worked first for an oil mill company as a disbursement officer and then as a ground crew of Zest Air. He is presently working as a part-time soccer coach at the Bethel International School in Palo, Leyte.

Rosalie May, 27, a graduate of Political Science at the University of the Philippines -Tacloban campus, worked as a medical representative and as a staff personnel of a nongovernment organization whose advocacy involves street children based in Tacloban.

“We don’t have resources of our own. And what we have is the motorcycle of Keith,” Rosalie May says.

Since their families frequently ask them to do simple errands like paying their water or electric bills, they came up with the idea of earning from running errands using Keith’s motorcycle.

They started the Keith & Run seven months ago, first offering to pay electric and water bills for their clients, the first of its kind in Tacloban City.

Rosalie May is in charge of paper work, like monitoring the cash flow, while Keith does the errands. If needed, Rosalie May also runs errands. 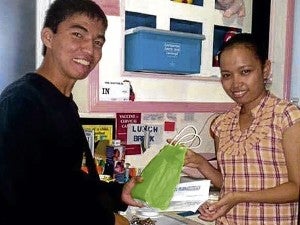 KEITH Sacramento and Rosalie May Getalado, the persons behind the errand service “Keith & Run,” a first of its kind venture in Tacloban City that is slowly picking up.

“The business is something new here in Tacloban. We’re doing errands for other people and charging them for the services that we render to them,” Rosalie May explains.

Initially, they only have their relatives and friends as  clients since the errands involved money and they have to gain the trust of their prospective clients first.

“But we’re able to prove to our clients that we can be trusted. That is why, we are making sure that we deliver the errands assigned to us by our customers on time. And by referral system or word of mouth, we’re able to gain more clients and their trust and confidence as well,” the two explain.

Collecting the P50 fee for each errand was also difficult at first since their customers did not pay them right away.

Aside from this, Keith and Run still had to make its mark in Tacloban City.

“Actually, we are still in the process of making our business acceptable to the people considering that this is a first of its kind in Tacloban. But we could say that we are doing fine three months after we started in April since we began to attract more customers,” Rosalie May says.

From just paying bills of their customers, Keith & Run has expanded its services to vehicle registrations, transactions at the National Statistics Office to get birth, death and marriage certificates, picking up for laundry and offering driving lessons and fixing vehicles.

Keith & Run will also provide services to fit the requirements of their customers.

One of their customers is Marivic Quiro, who owns a drug distribution company based in Tacloban City. Quiro met Keith at her children’s school, the Bethel International School in Palo, Leyte, where he works as a part-time soccer coach.

Quiro taps Keith & Run to deliver medicine and other medical supplies to doctors and pharmacies and for the collection of payments from their company’s customers.

To expand their customer base, Keith & Run promotes their business through friends and relatives and even through Facebook. “Of course, nothing beats word of mouth as a way of promoting our business,” Rosalie May adds.

The two do not have any regrets of going into business.

“We think we have made the right decision. We really asked this from God. People are beginning to appreciate our business,” Rosalie May says.

“We like our job now. There is no pressure as we don’t have a boss and we don’t work on an eight-to-five job.”

The two have dreams of expanding their business and hiring people as a way of giving back to the community.