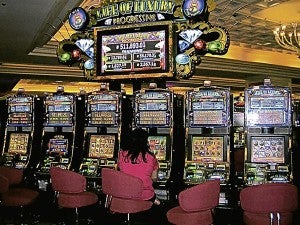 A crowd huddled around a group of slot machines tied together with a horse racing type of jackpot game.

The P1 million maximum limit for the grand prize is about to be reached which means that there will be a sure winner possibly within a few hours.  The suspense is made even more exciting with the increasing frequency of smaller jackpot prizes.  All seats are taken and big bettors play intensely hoping to be chosen at random by the machine.  Finally, the grand horse race begins.  The victor had a bet of P250 for the winning spin and competed with others who even put in more.

On another day, a chance visitor at the casino started her first few games on a 50-centavo machine.  A P25 spin (equivalent to P12.50) led her to win the grand carousel jackpot of almost P1 million.  It came as a complete shock and happened during idle and quiet hours at the casino.  In the previous days, another lucky P30 bettor won the approximately P3 million whopping prize.

Jackpots are the casino’s main attraction (that includes winning at the card games).  It is one reason why so many people spend a substantial amount of money.  But since there can only be one winner per jackpot, there are of course much more losers in the long run.  It is also common knowledge that the house always has the edge.

In an exclusive CBS network “60 Minutes” presentation, Lesley Stahl highlighted the burgeoning casino centers around the US as well as the possible addicting qualities of more modern slot machines, with some reference to heroin addiction.  While not everyone interviewed agreed that the machines are addictive (others say that it’s the people who get addicted since not everyone gets hooked), the report detailed how subliminal messages or images on the slot machines delivered constantly and speedily, can have some effect on the brain.  There was also an example of a gambler who developed the addicting habit when the casino location came nearer her home.

In the Philippines, the above consideration comes in light of the country’s growing casino industry (extending to the provinces), one that has been compared with Las Vegas type developments.  A visit to Resorts World in Parañaque confirms such possibilities.  To date, it is the first integrated casino center in the country—during a recent holiday, the place was overflowing with foreigners and locals who filled the humungous gaming can like packed sardines on the brink of over stimulation. 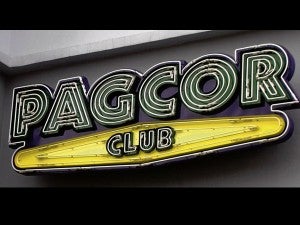 THE privatization of Pagcor remains an unresolved issue in the country.

But it doesn’t end there.  The consortium of Belle Corporation and Leisure Resorts World Corp. (LRWC) has already started to build an even bigger, more impressive and integrated Manila Bay gaming resort complex, one that is faced with opposition from other sectors of society.  To date, Pagcor has already licensed four groups to implement the project:  Travellers International Hotel Group Inc. (of Resorts World), the SM group, Bloomsberry Investments, and the Aruze group.

Nevertheless, certain people have cited that building such a casino project in Manila Bay goes against a Supreme Court ruling:  “In a unanimous 36-page decision penned by Justice Presbitero J. Velasco, Jr., the Court ordered petitioner government agencies to coordinate    the cleanup, restoration and preservation of the water quality of the Manila Bay, “a place with a proud historic past, once brimming with marine life and, for so many decades in the past, a spot for different contact recreation activities, but now a dirty and slowly dying expanse mainly because of the abject official indifference of people and institutions,” in line with the country’s development objective to attain economic growth in a manner consistent with the protection, preservation, and revival of our marine waters.” [Supreme Court News, December 2008]

Manila Bay’s unforgettable, centuries-old history does not include casino gaming.  For many Filipinos who are predominantly Catholic, the issue of gambling is also a moral one.  Many years ago, the Catholic Bishops Conference of the Philippines (CBCP) issued an unequivocal statement on gambling, one that does not rule out all forms of gaming:

To inform the public better about the reasons for this CBCP position, we present the following moral teachings and pastoral imperatives:

1. The Catholic Church teaches that “games of chance or wagers are not in themselves contrary to justice. They become morally unacceptable when they deprive someone of what is necessary to provide for his needs and those of others. The passion for gambling risks becoming an enslavement” (Catechism of the Catholic Church, no. 2413). This moral teaching does not prohibit some forms of gambling in certain situations.  In consequence, it does not prohibit people or institutions, even church- related ones, from receiving benefits from such gambling.

2. However, applying the general moral principle to the specific Philippine situation, the CBCP has deemed it necessary to state on several occasions that the form of gambling that is organized, widespread, and systemic, whether legal or illegal, is not desirable. It is creating a culture of gambling that is seriously eroding the moral values of our people. In its illegal form, especially jueteng, gambling has bred a clandestine network of corruption that feeds itself on the hundreds of millions of pesos lost to gambling especially by the poor.

3. Therefore, the CBCP has made it a collective policy:

To denounce illegal gambling in all its forms and prevent its legalization;

To combat the expansion of organized and systemic legal gambling;

To refrain from soliciting or receiving funds from illegal and legal gambling so as not to promote a culture of gambling; and

To encourage church personnel and church institutions to refrain from doing the same, even when the objective may be that of helping the poor.

Given the factors stated above, it is at the very least, an opportune moment for the whole nation to weigh heavily on the multi-billion casino projects in the pipeline.  Tourism bigwigs face a predicament—would the Philippines want to become known as the next Macau in Asia, like a copycat of sorts—where many beautiful churches sit amid grand and magnificent entertainment structures?  As most people are aware, casino gaming is a major income earner in Macau.

During a recent one-on-one interview with Andrew Scott for World Gaming Magazine,  Francis Lui who launched the newest integrated resort Galaxy Macau in Cotai mentioned his country’s tourism challenge:  “We had 25 million people come to Macau last year, but they only stayed for 1.5 days on average.  Our belief is that we can drive that 25 million people up, but at the same time, hopefully have them stay longer with us, spending not just on the tables, but also in shopping, entertainment and dining.”

Investors are generally optimistic about the Philippines and it is only a matter of time before money is fully invested. It also appears that the government, under the leadership of Mr. Aquino, fully supports the upcoming projects.

The Philippines gaming report on Macaubusiness.com details the local industry’s strong growth potential: “The gambling industry in the Philippines is worth an estimated P100 billion  ($2.08 billion per year), while illegal activities account for a further P50 billion  ($1.04 billion). Dean Macomber, speaking at a 2007 GEM expo in Manila, estimated that 66 percent of gaming revenues comes from operations in Metro Manila. He also provided an estimate of the future potential growth in gaming revenues, stating: “I estimate in 2007 Philippine gaming revenue reached $792 million. It’s not stretching things too far to say this market could be doing $1.8 billion in gaming revenue by 2013, even without Manila Bay Integrated City – that would amount to a doubling of the domestic market and a tripling of the VIP business.”

In view of its unique cultural and religious heritage, the country currently faces a critical national identity crossroad that needs to be addressed and defined by every Filipino. The prospects have been laid bare on the table. Consequently, it is the defining moment to speak up.

That is, if a few ordinary citizens even have the gumption to break the silence.

Looking out into the horizon, a virgin sits on the precipitous cliff of no return.  Her heart pulsates in quiet anticipation knowing intimately that her future will not stay uncertain for long…