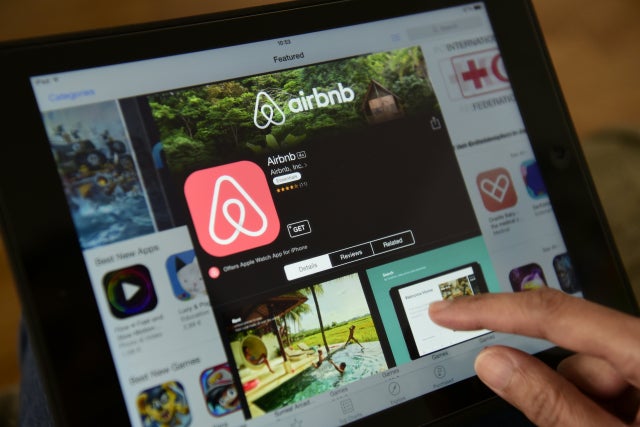 Facing competition from Airbnb, which will celebrate a decade this summer, top European attractions such as Paris, Amsterdam, Berlin and Barcelona are out to revamp their own offerings. Image: AFP PHOTO/John MACDOUGALL

Facing competition from Airbnb, which will celebrate a decade this summer, top European attractions such as Paris, Amsterdam, Berlin and Barcelona are out to revamp their own offerings.

The move is to keep rental prices in check yet keep supply healthy as Airbnb continues to be a thorn in the side of hoteliers, ten years on from its August 11, 2008 debut as Airbed & Breakfast.

After several false starts, the web-based phenomenon emerged in the public glare of that year’s Democratic National Convention in Denver to offer a competitive alternative to a “saturated” hotel market and, as one of its co-founders said, “a way to make a few bucks”.

Ten years on, Airbnb is worth an estimated $31 billion and has a stock of five million accommodation units advertising with it globally in 81,000 cities across some 200 countries.

Those statistics make it a standout success story of the sharing economy as it responds to “rising touristic and professional demand for independent and more spacious centrally-located accommodation in large cities,” reported France’s urbanism association Apur last month.

The hotel industry is less sold on the success of what has become a big rival eating into its business without being subject to the same legal and fiscal constraints.

Municipal authorities have also expressed “numerous misgivings,” notes Apur, finding Airbnb-style rentals have driven up prices to the extent many major European cities, as well as New York and Tokyo, have embarked upon a regulatory offensive.

Paris, Airbnb’s number one market globally with some 60,000 rentals, has already faced legal challenges along with rival Wimdu. Authorities have also clamped down harder on owners not respecting legal requirements with some already hit with fines after the French parliament voted through a package of action last month.

Paris, having already last year capped the maximum number of days permitted for a short-term let to 120 annually, also said in April it would sue Airbnb and Wimdu for failing to remove ads from people not properly declaring their properties.

Spanish cities have tried hard to put the squeeze on private landlords by, for example, limiting offerings to ground floor apartments which also afford provision of a private entrance.

Palma de Mallorca is seeking an outright ban after seeing such rentals soar 40 percent between 2013 and 2017.

In Madrid, where some 9,000 apartments are up for rent, around 2,000 of them unlicensed, the radical leftist city authorities are seeking by the end of this year to introduce a 95 percent tax rate for legal rentals.

On the Mediterranean coast Barcelona has also taken up the cudgels amid protests from residents of districts drowned in a sea of tourists ready to party noisily at all hours.

The city authorities now say no new licenses will be granted to single apartments based in the historic city centre.

Amsterdam back in December 2016 signed an accord it hailed as “unique in Europe” with Airbnb banning rentals beyond 60 days a year.

Berlin, which has seen real estate prices soar in recent years, had months earlier passed one of the continent’s strictest regimes to hobble further Airbnb expansion entailing the rental of a maximum one room in one’s dwelling with 100,000 euros ($110,000 fines) as a deterrent.

Even so, since May, that has been relaxed to allow renting out one’s entire private apartment.

On June 15, representatives from Amsterdam, Barcelona, Lisbon, Madrid and Paris, with Berlin absent but associated, met to “take stock of the extent of the phenomenon and compare public policy,” said Ian Brossat, tasked with rental affairs at Paris city hall.

“We are up against doublespeak from the platform (Airbnb) which, on the one hand, says it is going to play it by the rules and yet, on the other, indulges in intense lobbying in Brussels,” Brossat said.

Various rental tourism operators have filed complaints with the European Commission to contest national legislation of France, Spain, Belgium and Germany but for the time being it does not foresee the opening of violation procedures against one of these countries.

Despite the turbulence it has thrown up, professionals recognize that Airbnb has contributed to the sector’s positive overall development.

“I’m very much an admirer. They have done remarkable work in facilitating reservation, trip preparation, and the placing in contact with and very rapid exchange of information with the host,” Fabrice Collet, director general of France’s B&B group, told AFP.

He adds their pricing strategy “has enabled families to travel who previously were not able to do so.” NVG

Airbnb: From cash-strapped roommates to billionaires